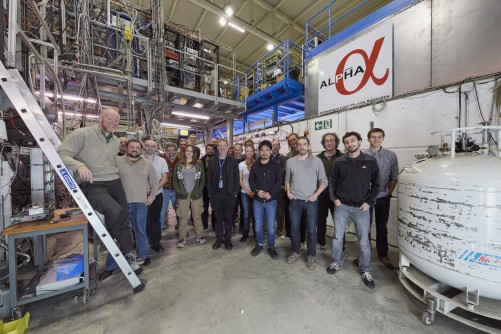 Newswise — Vancouver, Canada – Another year, another scientific breakthrough, and the latest from the ALPHA Collaboration could be its most important yet. Released today in the prestigious journal Nature, the collaboration reports on the first spectroscopic measurement of an atom of antimatter using lasers. ALPHA is an international team of researchers, including the ALPHA-Canada group, which studies antihydrogen, the antimatter partner to hydrogen. Their latest work represents a major step towards developing a very precise test of whether antimatter behaves differently than its normal matter anti-twin, thus opening up a promising new front to address the basic antimatter question: “if matter and antimatter were created equally during the Big Bang, where is all the antimatter?”

“Laser measurement on antimatter atoms has been a dream in the field for decades,” said an enthusiastic Dr. Makoto Fujiwara, TRIUMF Research Scientist and spokesperson for the ALPHA-Canada collaboration. “We are thrilled and relieved that we finally achieved what we set out to do when we started up in 2004, not least because ALPHA stands for Antihydrogen Laser Physics Apparatus!”

The experiment involves shining a laser beam on trapped antihydrogen atoms, which can absorb the light only at very specific frequencies. Measuring the distribution of these absorbed frequencies is called spectroscopy and it paints a unique fingerprint of the atom. Spectroscopic measurements are among the most precise in science, making them a perfect arena to test whether the structures of the antihydrogen and hydrogen atoms are identical.

Current theory predicts that antimatter and normal matter should have been created in equal amounts during the Big Bang, and should behave identically to each other, a consequence of so-called CPT symmetry. The former is a long-standing mystery since matter and antimatter annihilate upon contact, but our universe is composed purely of normal matter, suggesting that they are not exactly identical anti-twins. Any measureable difference between the two could indicate a violation of CPT symmetry and thus would have a profound impact on the mathematical underpinning of present theory.

The research was conducted at the CERN laboratory in Geneva. ALPHA employs a system of magnetic traps that allow antihydrogen atoms to be produced and stored long enough in a cryogenically cooled and vacuum-tight cylindrical chamber to be studied in detail. Laser beams of precise frequencies were shone through chamber windows onto the trapped antihydrogen to excite the so-called 1S-2S energy transition. The authors report that the antihydrogen spectrum was consistent with that of hydrogen to a relative precision of 2 parts in ten billion.

This breakthrough result comes during the first attempt at performing this fiendishly difficult experiment. A central challenge was getting the laser system to work in a system cooled to just above absolute zero. The cooling cryostat was designed and built at TRIUMF and the University of Calgary, and its design allowed the collaboration the opportunity to try various techniques that ultimately led to the system’s success. University of Calgary Professor Robert Thompson remarked, “The partnership between TRIUMF and Calgary in building and commissioning the ALPHA-2 cryostat was an outstanding example of these Canadian institutions stepping forward to overcome a technological challenge on a tight schedule.” Another challenge was data analysis, which required detecting a very faint signal of anti-atomic transitions. TRIUMF postdoctoral fellow Joseph McKenna and emeritus scientist Art Olin led sophisticated analysis that gave direct evidence for the results reported in the paper.

After this initial success, the ALPHA antimatter research program is poised for greater things when data taking resumes in 2017. The experience from the first run showed that significant improvements could be achieved soon, putting them within reach of the best CPT symmetry measurement. Work on other advances will commence as ALPHA continues on its march towards measuring the antihydrogen spectrum to the same precision measured for normal hydrogen, the holy grail of antimatter physics. The team also is preparing for another major challenge with the new project ALPHA-g, in which they will attempt a precision measurement of the force of the gravity on antimatter.

About TRIUMF: TRIUMF is Canada’s national laboratory for particle and nuclear physics and accelerator-based science. We are an international centre for discovery and innovation, advancing fundamental, applied, and interdisciplinary research for science, medicine, and business. Owned and operated by a university consortium, TRIUMF trains and inspires future leaders in science and technology. Our laboratory is a hub for inquiry and ingenuity, a Canadian centre of excellence deeply integrated into the global scientific community. TRIUMF’s multidisciplinary team of over 500 staff and trainees collaborates with Canadian and international users who visit the laboratory to leverage our world-class facilities. Together, we drive compelling research and develop ideas and innovations that benefit humanity. See. http://www.triumf.ca. Connect on Twitter, Facebook, and Instagram: TRIUMFlab