Altered Brain Activity in Schizophrenia May Direct Focus on Self 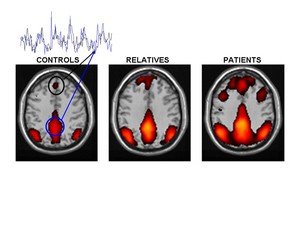 Altered brain connectivity of default brain network in people with schizophrenia and first-degree relatives Colored areas represent an interconnected network of brain regions that show synchronized activity (overlapping black and blue traces) when subjects rest and allow their minds to wander. The amount of synchrony, which reflects the strength of functional connections between the different areas, is increased in patients with schizophrenia. First-degree relatives of people with this illness also show some increase, although less than patients; this may reflect genetic effects on the brain that increase the risk of developing the disease. Black circle: medial prefrontal cortex. Blue circle: posterior cingulate/precuneus.

Newswise — Schizophrenia may blur the boundary between internal and external realities by overactivating a brain system that is involved in self-reflection, and thus causing an exaggerated focus on self, a new MIT and Harvard brain imaging study has found.

The traditional view of schizophrenia is that the disturbed thoughts, perceptions and emotions that characterize the disease are caused by disconnections among the brain regions that control these different functions.

But this study, appearing Jan. 19 in the advance online issue of the Proceedings of the National Academy of Sciences, found that schizophrenia also involves an excess of connectivity between the so-called default brain regions, which are involved in self-reflection and become active when we are thinking about nothing in particular, or thinking about ourselves.

"People normally suppress this default system when they perform challenging tasks, but we found that patients with schizophrenia don't do this," said John D. Gabrieli, a professor in the McGovern Institute for Brain Research at MIT and one of the study's 13 authors. "We think this could help to explain the cognitive and psychological symptoms of schizophrenia."

Gabrieli added that he hopes the research might lead to ways of predicting or monitoring individual patients' response to treatments for this mental illness, which occurs in about 1 percent of the population.

Schizophrenia has a strong genetic component, and first-degree relatives of patients (who share half their genes) are 10 times more likely to develop the disease than the general population. The identities of these genes and how they affect the brain are largely unknown.

The researchers thus studied three carefully matched groups of 13 subjects each: schizophrenia patients, nonpsychotic first-degree relatives of patients and healthy controls. They selected patients who were recently diagnosed, so that differences in prior treatment or psychotic episodes would not bias the results.

The subjects were scanned by functional magnetic resonance imaging (fMRI) while resting and while performing easy or hard memory tasks. The behavioral and clinical testing were performed by Larry J. Seidman and colleagues at Harvard Medical School, and the imaging data were analyzed by first author Susan Whitfield-Gabrieli, a research scientist at the MIT Martinos Imaging Center at the McGovern Institute.

The researchers were especially interested in the default system, a network of brain regions whose activity is suppressed when people perform demanding mental tasks. This network includes the medial prefrontal cortex and the posterior cingulate cortex, regions that are associated with self-reflection and autobiographical memories and which become connected into a synchronously active network when the mind is allowed to wander.

Whitfield-Gabrieli found that in the schizophrenia patients, the default system was both hyperactive and hyperconnected during rest, and it remained so as they performed the memory tasks. In other words, the patients were less able than healthy control subjects to suppress the activity of this network during the task. Interestingly, the less the suppression and the greater the connectivity, the worse they performed on the hard memory task, and the more severe their clinical symptoms.

"We think this may reflect an inability of people with schizophrenia to direct mental resources away from internal thoughts and feelings and toward the external world in order to perform difficult tasks," Whitfield-Gabrieli explained.

The hyperactive default system could also help to explain hallucinations and paranoia by making neutral external stimuli seem inappropriately self-relevant. For instance, if brain regions whose activity normally signifies self-focus are active while listening to a voice on television, the person may perceive that the voice is speaking directly to them.

The default system is also overactive, though to a lesser extent, in first-degree relatives of schizophrenia patients who did not themselves have the disease. This suggests that overactivation of the default system may be linked to the genetic cause of the disease rather than its consequences.

The default system is a hot topic in brain imaging, according to John Gabrieli, partly because it is easy to measure and because it is affected in different ways by different disorders.

About the McGovern Institute at MIT

The McGovern Institute for Brain Research at MIT is led by a team of world-renowned neuroscientists committed to meeting two great challenges of modern science: understanding how the brain works and discovering new ways to prevent or treat brain disorders. The McGovern Institute was established in 2000 by Patrick J. McGovern and Lore Harp McGovern, who are committed to improving human welfare, communication and understanding through their support for neuroscience research. The director is Robert Desimone, formerly the head of intramural research at the National Institute of Mental Health. Further information is available at: http://web.mit.edu/mcgovern/