An innovative study underway at UT Southwestern Medical Center aims to return the sense of touch to those who’ve lost it. Researchers are using sensory feedback technology to create a prosthetic hand that can feel. 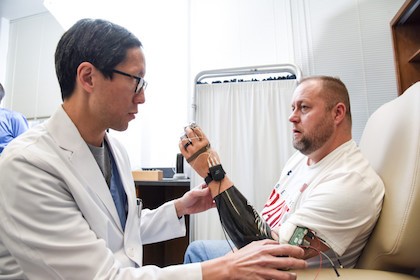 Newswise — DALLAS – Feb. 22, 2018 – Michael “Shawn” Findley, a 44-year-old amputee with a wiring harness emerging from his upper left arm, is working with a UT Southwestern team to help change the way robotic hand biofeedback occurs. Ultimately, he hopes this research may lead to the closest thing to feeling in the hands of every amputee.

A 2005 punch press accident in a Mount Pleasant, Texas, fabrication shop left Mr. Findley with mangled and amputated fingers on his left hand. Over the next four years, the Dallas native underwent 13 restorative operations before he decided in 2009 to have an elective amputation at midforearm. He was then fitted with a functioning prosthetic hand.

After electrodes were temporarily implanted in his residual limb at UT Southwestern in late October 2017, Mr. Findley drove in weekly from his home in Mount Pleasant to make the most of a 90-day research window, part of Dr. Jonathan Cheng’s HAPTIX neural interfacing study. On a recent Friday, Mr. Findley relearned how much fingertip pressure it took to pick up different small weights, as these readings were fed into several electronic graphs monitored by the research team.

An Army veteran, Mr. Findley served from 1993 to 1999. His willingness to participate in thisinnovative research and complete numerous trips to Dallas is easily understood.

“I have a 19-year-old son in the Marines. You hope they all stay out of harm’s way, but you want to have done what you could,” Mr. Findley said, his voice catching with emotion. “If something did happen, well, you know you might have helped in some way. You’ve got to have someone willing to do this, and I’m here for as long as they want me.”

The federal government’s Hand Proprioception and Touch Interfaces (HAPTIX) program seeks to create a prosthetic hand system that moves and provides sensation like a natural hand. Dr. Cheng, an Associate Professor of Plastic Surgery at UT Southwestern, said he believes that the body’s natural neural communications pathway – even one that has been severed – can be tapped into using an artificial messaging bridge.

Dr. Cheng’s research, which has advanced from animal models to humans, focuses on communication of undamaged nerves remaining in the limb after amputation. Other research has employed electrodes inserted into the control areas of the brain. The UT Southwestern team, however, believes the singular workload of nerves in the forearm will provide the best functional pathway.

“The brain is complex and changes all the time,” Dr. Cheng said. “Nerves outside the brain, in contrast, are like living wire: one fiber connected to one thing.”

Robotic hand research for amputees has been underway for decades. While the hand can perform up to 22 different functions simultaneously, the most sophisticated commercially available robotic hands can only control three different functions – one at a time. Development of more advanced robotics and control systems has been funded by the U.S. Defense Advanced Research Projects Agency (DARPA) for over 15 years, Dr. Cheng said. From that, two technologically advanced research-grade robotic hands have emerged, both of which have 20 to 30 distinct functions.

Although technologically advanced, these newest robotic hands as yet have not demonstrated practical application in patients because the human-machine interface has not been mastered; patients using those advanced robotic hands cannot feel with them or control them naturally. Previous DARPA-sponsored studies have shown that implanting electrodes (electrical contacts) on the surface of the brain helps, but the technique has not been applicable to many patients due to the need for brain surgery and the extreme complexity of decoding brain signals. Dr. Cheng and other researchers are ultimately striving for the degree of dexterity and sensitivity needed to type on a keyboard or play a musical instrument.

“The problem is not the amputees or the robotic hands,” said Dr. Cheng. “The problem has been the biological interface between the two.”

The UT Southwestern team’s first two human participants – who were both hand amputees – had electrodes attached to the ulnar nerve. The ulnar nerve runs the length of the forearm, ending with 15 tiny muscles in the hand. The ulnar nerve controls every type of hand motion, plus touch and movement sensation.

“It is a very direct access,” Dr. Cheng said. “The organization of these nerves is quite predictable during peripheral nerve reconstructions, which are done in my everyday clinical practice.”

Mr. Findley is one of the four clinical trial participants that UT Southwestern researchers are continuing to work with on biological and physiological investigations. This group includes hand and forearm amputees, advancing the investigation to include both the median and ulnar nerves in the forearm. The goal is to restore sensation in patients with robotic hands.

“Feeling your hand is absolutely the purpose here,” Dr. Cheng said. “For all of my other patients, being able to feel with their hand is mandatory. It should be no different for patients using robotic hands.”

After he received his prosthetic hand, Mr. Findley got a job at Lowe’s – first working in the warehouse and later as a diversity and outreach specialist – before hearing the call to pastor full time in 2012. He and his wife, Rachel, have a blended family of five children – Brittany, J.C., Sarah, Michael, and Ty, a high school sophomore still living at home – and two grandchildren.

Members of his congregation in Mount Pleasant regularly receive sermons with a personal touch. “People will listen and believe it when I tell them you can overcome trying situations, that help is available if you ask for it, or that people are the same even if they don’t quite look alike,” Mr. Findley said.

“My life has definitely changed, but I’m a goal-oriented person,” he said. “My mindset has always been, ‘We’re moving forward.’”