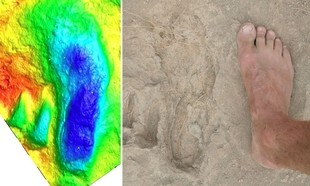 Photo of 1.5 million year-old footprint (center) beside a foot (right) and color-contoured 3D laser scan image (left) of the print.

Newswise — The George Washington University professor Brian Richmond and his colleagues have discovered a set of 1.5 million-year-old human ancestor footprints in Kenya that show the earliest direct evidence of a modern human style of upright walking called bipedalism. The discovery of ancient hominin footprints is an incredibly rare event, and the new prints are the second oldest in the world after the 3.7-million year-old prints in Laetoli, Tanzania, making this one of the most important discoveries in recent years regarding the evolution of human walking. For the first time ever, research establishes a methodology for three-dimensional analysis and comparison of ancient human footprints.

Matthew Bennett, Bournemouth University professor and lead of the study, said, "Our findings from Ileret show that by 1.5 million years ago, hominins had evolved an essentially modern human foot function and a style of bipedal locomotion that we would recognize today."

In a project led jointly by Jack Harris, Rutgers University professor; David Braun, University of Cape Town; and the National Museums of Kenya, the research team excavated two distinct sedimentary layers in a single outcrop at Ileret, Kenya, to reveal footprints preserved in fine-grained mud. These surfaces have been dated precisely through interbedded volcanic ash layers to 1.51 to 1.53 million years old and were digitally scanned by Bennett to create three-dimensional digital elevation models of the prints, which are accurate to a fraction of a millimeter.

The international team from the United Kingdom, United States, South Africa, and Kenya found that the prints were probably formed by the species Homo erectus. The unique structure of the modern foot is characterized by an adducted big toe that is in line with the other toes, large and robust heel and ankle bones, and a pronounced longitudinal arch and short toes—all of which are evident in the fossil footprints.

By applying geometric morphometric statistics to biological landmarks placed on the footprint scans, the team was able to determine that the shapes of these prints significantly are more like those formed by modern humans compared to the prints from Laetoli, Tanzania, which are dated to 3.75 million years and believe to have been formed by Australopithecus afarensis.

Based on the size and the stride pattern of these newly discovered footprints, the team determined that the individuals responsible would have been approximately 1.75 meters (about 5'9") in height.

"The size and stature estimates derived from the Ileret prints compare well with those of our distant ancestor, Homo erectus, and are too large to have been formed by other hominin species living in this part of Africa in the early Pleistocene," said Richmond.

Harris said, "These footprints, together with evidence from the archaeological record, support the hypothesis of a hominin with a larger home range and enhanced dietary quality, giving us an emerging picture of the paleo-biology of early Homo erectus that suggests a shift in cultural and biological adaptations relative to earlier hominins."

The process of laser scanning footprints not only provides a unique method of analysis but also allows for their preservation. The area within which these prints are located is steadily eroding, thereby placing this valuable site at great risk. The digital scans are easily replicable and can be transformed into real-life casts available for museum display around the world or even in the classroom. The National Museums of Kenya has pioneered research in early hominin evolution in Northern Kenya over the last 40 years.

"These footprints are one of the most important discoveries of recent years, and the museum is doing everything possible to ensure the safety of this unique site," said Emma Mbua of the National Musuems of Kenya. "We hope to bring this discovery to worldwide audiences in the future."

The article, "Early Hominin Foot Morphology Based on 1.5-Million-Year-Old Footprints from Ileret, Kenya" appears in the Feb. 27 edition of Science. Science is a weekly, peer-reviewed journal that publishes significant original scientific research, plus reviews and analyses of current research and science policy.

Located four blocks from the White House, The George Washington University was created by an Act of Congress in 1821. Today, GW is the largest institution of higher education in the nation's capital. The university offers comprehensive programs of undergraduate and graduate liberal arts study, as well as degree programs in medicine, public health, law, engineering, education, business, and international affairs. Each year, GW enrolls a diverse population of undergraduate, graduate, and professional students from all 50 states, the District of Columbia, and more than 130 countries.

For more information about the Center for the Advanced Study of Hominid Paleobiology, visit www.gwu.edu/~hogwash/.