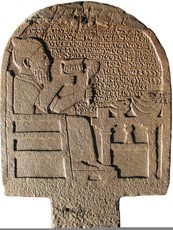 A stone slab found in Turkey by a University of Chicago expedition reveals the first evidence for a belief in the region for the soul existing outside the body. People believed the soul lived in the stone. 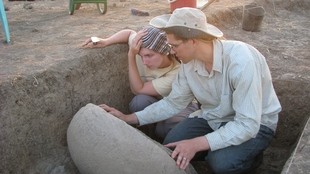 Virginia Rimmer and Benjamin Thomas, both Ph.D. students in the Department of Near Eastern Languages and Civilizations of the University of Chicago, examine a funerary monument being excavated in Turkey. The monument has the first evidence that people in the region believed the soul could exist outside the body. 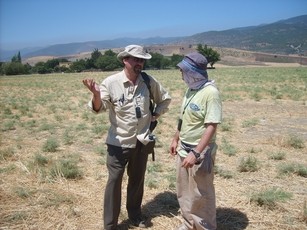 Newswise — Archaeologists in southeastern Turkey have discovered an Iron Age chiseled stone slab that provides the first written evidence in the region that people believed the soul was separate from the body.

University of Chicago researchers will describe the discovery, a testimony created by an Iron Age official that includes an incised image of the man, on Nov. 22-23 at conferences of biblical and Middle Eastern archaeological scholars in Boston.

The Neubauer Expedition of the Oriental Institute at the University of Chicago found the 800-pound basalt stele, 3 feet tall and 2 feet wide, at Zincirli (pronounced "Zin-jeer-lee" ), the site of the ancient city of Sam'al. Once the capital of a prosperous kingdom, it is now one of the most important Iron Age sites under excavation.

The stele is the first of its kind to be found intact in its original location, enabling scholars to learn about funerary customs and life in the eighth century B.C. At the time, vast empires emerged in the ancient Middle East, and cultures such as the Israelites and Phoenicians became part of a vibrant mix.

The man featured on the stele was probably cremated, a practice that Jewish and other cultures shun because of a belief in the unity of body and soul. According to the inscription, the soul of the deceased resided in the stele.

"The stele is in almost pristine condition. It is unique in its combination of pictorial and textual features and thus provides an important addition to our knowledge of ancient language and culture," said David Schloen, Associate Professor at the Oriental Institute and Director of the University's Neubauer Expedition to Zincirli.

Schloen will present the Kuttamuwa stele to a scholarly audience at the meeting of the American Schools of Oriental Research on Nov. 22 in Boston, the major annual conference for Middle Eastern archaeology. Dennis Pardee, Professor of Near Eastern Languages and Civilization at the University of Chicago, will present his translation of the stele's 13-line inscription the following day at the annual meeting of the Society of Biblical Literature, also in Boston, in a session on "Paleographical Studies in the Near East."

German archaeologists first excavated the 100-acre site in the 1890s and unearthed massive city walls, gates and palaces. A number of royal inscriptions and other finds are now on display in museums in Istanbul and Berlin. Schloen and his team from the University of Chicago have excavated Zincirli for two months annually since 2006.

"Zincirli is a remarkable site," said Gil Stein, Director of the Oriental Institute. "Because no other cities were built on top of it, we have excellent Iron Age materials right under the surface. It is rare also in having written evidence together with artistic and archaeological evidence from the Iron Age. Having all of that information helps an archaeologist study the ethnicity of the inhabitants, trade and migration, as well as the relationships of the groups who lived there."

The stele was discovered last summer in a small room that had been converted into a mortuary shrine for the royal official Kuttamuwa, self-described in the inscription as a "servant" of King Panamuwa of the eighth century B.C. It was found in the outer part of the walled city in a domestic area—most likely the house of Kuttamuwa himself—far from the royal palaces, where inscriptions had previously been found.

The inscription reads in part: "I, Kuttamuwa, servant of Panamuwa, am the one who oversaw the production of this stele for myself while still living. I placed it in an eternal chamber(?) and established a feast at this chamber(?): a bull for [the storm-god] Hadad, ... a ram for [the sun-god] Shamash, ... and a ram for my soul that is in this stele. "¦" It was written in a script derived from the Phoenician alphabet and in a local West Semitic dialect similar to Aramaic and Hebrew. It is of keen interest to linguists as well as biblical scholars and religious historians because it comes from a kingdom contemporary with ancient Israel that shared a similar language and cultural features.

The finding sheds a striking new light on Iron Age beliefs about the afterlife. In this case, it was the belief that the enduring identity or "soul" of the deceased inhabited the monument on which his image was carved and on which his final words were recorded.

The stele was set against a stone wall in the corner of the small room, with its protruding tenon or "tab" still inserted into a slot in a flagstone platform. A handsome, bearded figure, Kuttamuwa wore a tasseled cap and fringed cloak and raised a cup of wine in his right hand. He was seated on a chair in front of a table laden with food, symbolizing the pleasant afterlife he expected to enjoy. Beside him is his inscription, elegantly carved in raised relief, enjoining upon his descendants the regular duty of bringing food for his soul. Indeed, in front of the stele were remains of food offerings and fragments of polished stone bowls of the type depicted on Kuttamuwa's table.

According to Schloen, the stele vividly demonstrates that Iron Age Sam'al, located in the border zone between Anatolia and Syria, inherited both Semitic and Indo-European cultural traditions. Kuttamuwa and his king, Panamuwa, had non-Semitic names, reflecting the migration of Indo-European speakers into the region centuries earlier under the Hittite Empire based in central Anatolia (modern Turkey), which had conquered the region.

But by the eighth century B.C., they were speaking the local West Semitic dialect and were fully integrated into local culture. Kuttumuwa's inscription shows a fascinating mixture of non-Semitic and Semitic cultural elements, including a belief in the enduring human soul—which did not inhabit the bones of the deceased, as in traditional Semitic thought, but inhabited his stone monument, possibly because the remains of the deceased were cremated. Cremation was considered to be abhorrent in the Old Testament and in traditional West Semitic culture, but there is archaeological evidence for Indo-European-style cremation in neighboring Iron Age sites, although not yet at Zincirli itself.

In future excavation campaigns, the Neubauer Expedition, under Schloen's direction, plans to excavate large areas of the site in order to understand the social and economic organization of the city and its cultural development over the centuries. Schloen hopes to illuminate Iron Age culture more widely, of which Zincirli provides a richly documented example.

Caption: A stone slab found in Turkey by a University of Chicago expedition reveals the first evidence for a belief in the region for the soul existing outside the body. People believed the soul lived in the stone.

Caption: Virginia Rimmer and Benjamin Thomas, both Ph.D. students in the Department of Near Eastern Languages and Civilizations of the University of Chicago, examine a funerary monument being excavated in Turkey. The monument has the first evidence that people in the region believed the soul could exist outside the body.