Newswise — With one arm raised and a determined scowl, the figure looks ready to march right off his carved tablet and into the history books. If only we knew who he was - corn god? Tribal chief? Sacred priest? “It’s beautiful and was obviously very important,” says University of Wisconsin-Madison archaeologist John Hodgson of the newly discovered stone monument. “But we will probably never know who he was or what the sculpture means in its entirety.” The man is the central figure on a stone monument discovered in 2009 at a site called Ojo de Agua in far southern Mexico in the state of Chiapas along the Pacific coast. Hodgson, a doctoral candidate in anthropology at UW-Madison, describes the new monument in the cover article of the current issue (December 2010) of Mexicon, a leading peer-reviewed journal of Mesoamerican studies. The article, titled “Ojo de Agua Monument 3: A New Olmec-Style Sculpture from Ojo de Agua, Chiapas, Mexico,” is co-authored with John E. Clark, of Brigham Young University, and Emiliano Gallaga Murrieta, director of the National Institute of Anthropology and History in Chiapas. Monument 3 is just the second carved monument found in Ojo de Agua. Monument 1 was discovered accidently when a local farmer hit it with a plow in the 1960s. Monument 3 was a similarly fortuitous finding, uncovered in the process of digging an irrigation ditch. (Monument 2 is a large boulder with a flat surface and no visible carving, which Hodgson found in 2005 and reported in the January/February 2006 issue of Archaeology magazine in an article on Ojo de Agua.) Hodgson was working in the area and received word of the finding within just a few days of its discovery. He was able to see the monument’s impression in the trench wall and study the soil layers where it had been buried, gaining a wealth of information that is usually lost long before any archaeologist lays eyes on a piece. “Usually sculptures are first seen by archaeologists in private art collections and we normally have no good idea where they came from. The depictions of figures and the motifs change in form through time so you can get an approximate date by comparing styles,” he says. “But we were able to date the new monument by where it was found to a narrow 100-year window, which is very rare.” The archaeological context and radiocarbon dating of ceramic sherds associated with the stone monument show that it dates to 1100 to 1000 B.C., making it approximately 3,000 years old. Its age and style correspond to the Early Formative period, when an early culture known as the Olmec dominated the area. Its purpose and meaning, however, will be harder to ascertain. “Everything means something in this kind of culture,” says pre-eminent archaeologist Michael D. Coe, a professor emeritus of anthropology at Yale University and expert on Mesoamerican civilizations. “It obviously was a public monument — an important one, probably in connection with some really big cheese who lorded it over the area.” Coe was not directly involved in the work but is familiar with the newly discovered monument.

“It appears to me to be a depiction of an event or a way to convey other types of information,” Hodgson adds. “This dates to a time prior to a developed written language, but like the modern symbol used internationally for the Red Cross, symbols are very efficient at communicating complicated ideas.” The main figure on the tablet is depicted wearing an elaborate headdress, loincloth and ornate accessories, including a pair of large, comb-like ear ornaments, a rope-like necklace and a thick belt with a jaguar-head buckle. A face on the headdress includes features such as sprouting plants that identify it as a corn god. The tablet also includes a smaller secondary figure and a series of asymmetric zigzag designs that the authors suggest could represent lightning, local mountain ranges, or other features of the natural world. “This is closely connected with agriculture and the cult of the corn god,” Coe says, pointing out the zigzags. “Thunderstorms bring the rain.” The monument is a carved flat slab of a relatively soft, local volcanic stone that weighs about 130 pounds. It stands nearly three feet tall, about 14 inches wide, and ranges from four to seven inches thick. The use of local materials shows it was made in or near Ojo de Agua, Hodgson says, but style similarities to pieces found in larger Olmec centers near the Gulf of Mexico and the Valley of Mexico indicate pan-regional influences as well. “It’s cruder in execution than most Olmec monuments from the other side of the isthmus — ‘provincial’ Olmec,” Coe says. But despite lacking some of the intricate artistry, it is still relatively sophisticated, he says. “This adds to our knowledge of the Olmec on the south side of the isthmus.” The depiction of corn is particularly notable. Corn cultivation is generally associated with a settled lifestyle rather than a nomadic existence, indicating that Ojo de Agua was almost certainly a farming community. The grain’s storability and nutritional content also would have allowed the population to expand drastically and the civilization to become more complex, Hodgson says, adding that “the early date of the monument supports the idea that there was an early association between corn and religion.” Ojo de Agua lies in the heart of the ancient Aztec province Soconusco, nestled in a bend of the Coatán River. It is the earliest known site in Mesoamerica with formal pyramids built around plazas. Though it has not been worked very extensively as an archeological site, Ojo de Agua appears to cover about 200 hectares and is the largest site in the area from the time period 1200-1000 B.C. The limited work to date describes civic architecture consistent with a decent-sized planned settlement. The identified platform mounds are laid out in a deliberate alignment that may be relative to magnetic north. “That’s something we see later but to see it this early is pretty surprising,” says Hodgson, who has been working at Ojo de Agua since 2003. The site appears to have been occupied for 150 to 200 years before being abandoned for unknown reasons. Hodgson expects there are many more clues at Ojo de Agua and hopes to have the opportunity to continue working at the site and perhaps another look at Monument 3. “We’ve just scratched the surface there. The things we’ve found are fantastic,” Hodgson says. “These early societies were a lot more complicated than we thought they were.” Hodgson’s work has been supported by the New World Archaeological Foundation. 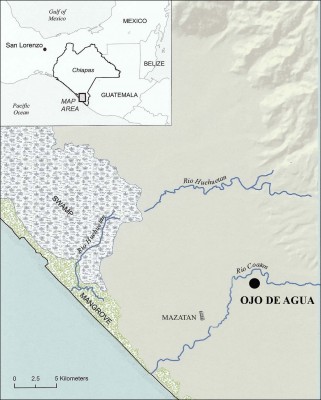 Caption: A map shows the location of Ojo de Agua, an archaeological site in the southern Mexican state of Chiapas. A 3,000-year-old Olmec-style carved stone monument, found at the site in 2009, provides information about Olmec culture in the area, including evidence of the early importance of corn. The monument and its archaeological context were described in a December 2010 article by a team of archaeologists from the University of Wisconsin-Madison, Brigham Young University, and the National Institute of Anthropology and History in Chiapas, Mexico. 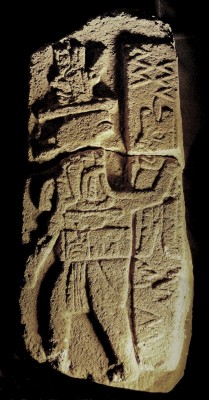 Caption: Pictured in 2009, a recently discovered 3,000-year-old Olmec-style stone monument from Ojo de Agua, the site of an early planned settlement in what is now the southern Mexican state of Chiapas. The carved monument provides information about Olmec culture in the area and includes symbols of maize, deities or other important figures, and possible features of the natural world. The monument and its archaeological context were described in a December 2010 article by a team of archaeologists from the University of Wisconsin-Madison, Brigham Young University, and the National Institute of Anthropology and History in Chiapas, Mexico.