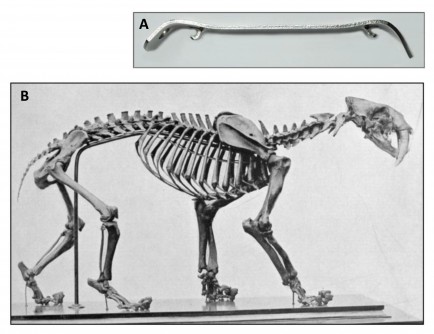 Copyright Image B: The Carnegie Institution for Science, reprinted with permission.

Newswise — New York, NY - Sabertooth cats (e.g., Smilodon fatalis) have long inspired the imagination of paleontologists and the public alike. With their powerful forelimbs and enormous upper canines, these now-extinct cats were formidable predators that thrived for millions of years. But how did they kill their prey?

Research published today in PLOS ONE suggests the cats may have used their jaws like a can-opener.

Specifically, the type of can-opener with a long lever handle and a pointed triangular tip. The kind of can-opener that was a required utensil when chocolate syrup came in a can.

There have been many previous models for the sabertooth jaw function.

Early researchers likened the canines to knives (i.e., “sabers”) that were used to stab or slash the prey. Leaping onto its victim, the cat would plunge its upper canines into the prey, either eviscerating the animal or causing massive blood loss.

Later research questioned whether the upper canines would have enough force to penetrate the hide of the prey without an opposing force from the lower jaw; hence the “canine shear-bite.” In the canine shear-bite model, the cat uses both its upper and lower jaws to bite the prey, but uses a downward nodding motion of the head to power the bite.

The canine shear-bite has been the most widely-accepted theory for sabertooth jaw function for almost 30 years.

However, a new geometric analysis of the canine shear-bite published in PLOS ONE now shows that a downward motion of the cat’s head would not increase the force of the bite, arguing against the canine shear-bite. With its massively enlarged upper canines, how could the cat produce enough force to close its jaws?

Enter the can-opener mechanism, more formally known as the Class 1 Lever Model (the “class” of the lever describes the relative positions of the force, resistance and fulcrum). Instead of the jaw muscles contracting to close the jaws, the cat may have immobilized its lower jaw against the neck of the prey, like the lug of a can-opener. Then, pushing with its forelimbs against the ground, the cat could elevate the base of its neck, rotating its head and canines forward into the prey (with the lower jaw functioning as a fulcrum). The mechanism is similar to the way in which an upward force against the arm of the can-opener drives the tip downward into the can.

As explained by Dr. Jeffrey G. Brown, independent researcher and author of the study, “In the canine shear-bite, the cat’s forelimbs restrain the prey and the neck powers the bite. In the Class 1 Lever Model there is an alternative method for restraining the prey, freeing the forelimbs to power the bite.”

Although the experiments in the study focus on the sabertooth cat, S. fatalis, the study has wider implications for sabertooth predators in general.

“Although the model will require further confirmation, it’s consistent with the current data. It’s an exciting new paradigm that may open up new avenues of research to help us understand these phenomenal creatures.”

Further details of the study and images of the new bite mechanism appear in the October 1, 2014 release of the journal PLOS ONE.

The author reports no outside sources of funding for this study.