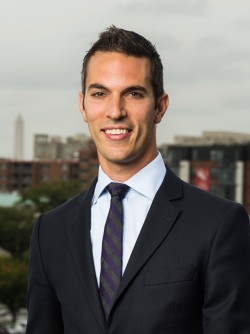 Newswise — The University of California San Diego’s 13th annual Dinner in the Library—set in the iconic Geisel Library building—will take place Friday, Sept. 9, featuring Ari Shapiro, award-winning journalist and co-host of NPR’s popular radio news show, “All Things Considered.” Shapiro will take guests “Behind the News of the Moment,” sharing his insight on the making of the news, which promises to be fascinating with the presidential election just a few months away. In addition to Shapiro’s talk, Dinner in the Library will include a signature cocktail hour, gourmet dinner, and champagne and dessert reception.

Proceeds from the event will support the greatest needs of the UC San Diego Library, which include renovations and enhancements to the Geisel Library to better meet the ever-changing information needs of students, faculty and community members.

During the event, Shapiro will draw upon his remarkable career as a globe-trotting journalist and co-host of the nation’s most popular afternoon commute-time news broadcast. Whether reporting from London or New Orleans, Shapiro transports his listeners to the scenes of some of the world’s most compelling news events. Among his many achievements, Shapiro was the first NPR reporter to be promoted to correspondent before age 30, and has received numerous honors and recognition for his journalistic work. In addition to chronicling four years of President Barack Obama’s administration as White House correspondent, he covered the U.S. courts and the American justice system during an especially turbulent time, and was the first recipient of the American Judges’ Association American Gavel Award. Shapiro has also been honored by the Columbia Journalism Review and the American Bar Association for his work on disability benefits for injured veterans and the failures of Louisiana’s detention system after Hurricane Katrina, respectively. A frequent guest analyst on television news programs, Shapiro also finds time for an occasional singing gig with the “little orchestra,” Pink Martini.

“We are excited to welcome NPR’s Ari Shapiro to Dinner in the Library, our favorite event, and know that he has some amazing experiences to share with us about the current state of the news and world events,” said Brian E.C. Schottlaender, The Audrey Geisel University Librarian. “Funding from this event will support our greatest priorities, which include library upgrades and enhancements as part of the Geisel Library Revitalization Initiative. I am truly grateful to our incredible sponsors for their support of this always memorable event.”

With a lead gift from Audrey Geisel, the UC San Diego Library launched the Geisel Library Revitalization Initiative in 2015 to update and enhance key interior spaces of the Geisel Library building, including the top (8th) floor, which boasts panoramic views of the entire region. With additional support from alumni and friends, the project will ensure that the Geisel Library is as inspiring inside as it is on the outside, continuing to function as a vital and innovative facility that enables UC San Diego’s talented students, faculty, and staff to excel.

Support from Dinner in the Library will fuel the continued growth and development of UC San Diego Library collections, learning spaces and services to meet the information and knowledge needs of scholars, students and community members. The Library currently provides access to more than seven million digital and print volumes, journals and multimedia materials, giving users 24/7 digital access to nearly 600,000 e-books, 42,000 e-periodicals and approximately 300,000 items from the Library’s digitized local collections.

Schottlaender added: “I am also very grateful to our honorary committee and its inaugural chair, our friend Jeanne Jones. She has assembled a stellar group of San Diegans—who share a commitment to the university and to the Library—to lend their support to our event.”