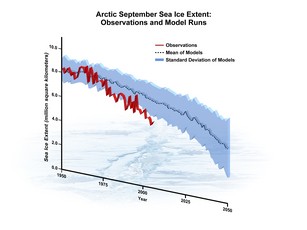 This figure illustrates the extent to which Arctic sea ice is melting faster than projected by computer models. The dotted line represents the average rate of melting indicated by computer models, with the blue area indicating the spread among the different models (shown as plus/minus one standard deviation). The red line shows the actual rate of Arctic ice loss based on observations. The observations have been particularly accurate since 1979 because of new satellite technology.

Arctic sea ice is melting at a significantly faster rate than projected by even the most advanced computer models, a new study concludes. The research, by scientists at the National Center for Atmospheric Research (NCAR) and the University of Colorado's National Snow and Ice Data Center (NSIDC), shows that the Arctic's ice cover is retreating more rapidly than estimated by any of the 18 computer models used by the Intergovernmental Panel on Climate Change (IPCC) in preparing its 2007 assessments.

The study, "Arctic Sea Ice Decline: Faster Than Forecast?" will appear tomorrow in the online edition of Geophysical Research Letters. It was led by Julienne Stroeve of the NSIDC and funded by the National Science Foundation, which is NCAR's principal sponsor, and by NASA.

"While the ice is disappearing faster than the computer models indicate, both observations and the models point in the same direction: the Arctic is losing ice at an increasingly rapid pace and the impact of greenhouse gases is growing," says NCAR scientist Marika Holland, one of the study's co-authors.

The authors compared model simulations of past climate with observations by satellites and other instruments. They found that, on average, the models simulated a loss in September ice cover of 2.5 percent per decade from 1953 to 2006. The fastest rate of September retreat in any individual model was 5.4 percent per decade. (September marks the yearly minimum of sea ice in the Arctic.) But newly available data sets, blending early aircraft and ship reports with more recent satellite measurements that are considered more reliable than the earlier records, show that the September ice actually declined at a rate of about 7.8 percent per decade during the 1953-2006 period.

"This suggests that current model projections may in fact provide a conservative estimate of future Arctic change, and that the summer Arctic sea ice may disappear considerably earlier than IPCC projections," says Stroeve.

The study indicates that, because of the disparity between the computer models and actual observations, the shrinking of summertime ice is about 30 years ahead of the climate model projections. As a result, the Arctic could be seasonally free of sea ice earlier than the IPCC- projected timeframe of any time from 2050 to well beyond 2100.

The authors speculate that the computer models may fail to capture the full impact of increased carbon dioxide and other greenhouse gases in the atmosphere. Whereas the models indicate that about half of the ice loss from 1979 to 2006 was due to increased greenhouse gases, and the other half due to natural variations in the climate system, the new study indicates that greenhouse gases may be playing a significantly greater role.

There are a number of factors that may lead to the low rates of simulated sea ice loss. Several models overestimate the thickness of the present-day sea ice and the models may also fail to fully capture changes in atmospheric and oceanic circulation that transport heat to polar regions.

Although the loss of ice for March is far less dramatic than the September loss, the models underestimate it by a wide margin as well. The study concludes that the actual rate of sea ice loss in March, which averaged about 1.8 percent per decade in the 1953-2006 period, was three times larger than the mean from the computer models. March is typically the month when Arctic sea ice is at its most extensive.

The Arctic is especially sensitive to climate change partly because regions of sea ice, which reflect sunlight back into space and provide a cooling impact, are disappearing. In contrast, darker areas of open water, which are expanding, absorb sunlight and increase temperatures. This feedback loop has played a role in the increasingly rapid loss of ice in recent years, which accelerated to 9.1 percent per decade from 1979 to 2006 according to satellite observations.