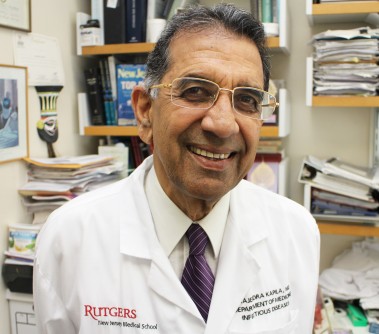 Rutgers infectious disease physician Rajendra Kapila says it will be extremely complicated both to evaluate and to manufacture an experimental Ebola drug. 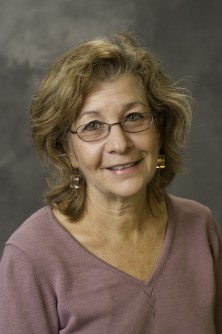 Newswise — The outbreak of the deadly Ebola virus in West Africa has Americans concerned about their health and safety. The World Health Organization (WHO) has declared an international public health emergency in an effort both to contain the spread of the virus, which is considered 90 percent fatal, and to warn people about its seriousness.

A WHO official has said it is likely that the worst of the outbreak is yet to come.

At major entry points to the United States, including Newark Liberty and Kennedy International Airports, government workers are on alert in case incoming travelers who have been to West Africa show signs of illness and need to be quarantined. Federal, state and local health officials, as well as hospitals, have established detailed protocols for handling possible cases, taking advantage of a sophisticated public health infrastructure that poorer countries lack.

Rutgers Today asked Rajendra Kapila, an infectious disease physician at Rutgers New Jersey Medical School, and Janet Golden, a medical historian at Rutgers University-Camden, how concerned Americans should be about a potential outbreak in this country.

People arrive in the U.S. from infected regions of Africa every day, but the director of the Centers for Disease Control and Prevention says he is “confident that there will not be a large Ebola outbreak” here. Should he be?

Rajendra Kapila: I also don’t think Ebola would spread widely among the general public. But it could severely harm individual Americans. Let’s say someone comes here from West Africa. If that individual develops symptoms suggesting Ebola infection, and is spending time with friends and family, those people can be at risk.

At the first sign of such an illness, even a low fever that usually would be easy to ignore, such an individual should be immediately checked in a hospital.

What makes experts, including you, believe the general public is not at high risk in the U.S.?

Janet Golden: One is the nature of the disease. As awful as Ebola is, we are fortunate that it only spreads through contact with bodily fluids. That automatically makes it easier to control – especially with other rigorous public health measures in place – than the sources of past epidemics, where people were sickened through airborne transmission or by insect or animal bites.

Are there examples of epidemics that were not well controlled?

Golden: There was an outbreak of bubonic plague in San Francisco at the turn of the 20th century. People didn’t understand then that the plague is transmitted from rats to fleas to humans. Officials put barbed wire around Chinatown, where they had seen many cases, and thought that would prevent the disease from spreading. Of course it did not stop the rats. During the 1918 influenza epidemic, the city of Philadelphia held a Liberty Loan parade and brought out 200,000 people to watch it. Since flu spreads readily through the air, death rates obviously spiked in the weeks that followed.

These episodes show how important it is to know the different ways diseases are transmitted and to respond in ways that take that into account. In this country I am actually more concerned about multidrug resistant tuberculosis, another disease that spreads through the air, than I am about Ebola. I think we have the right tools to handle Ebola.

When two American aid workers were flown from Africa to Atlanta for treatment, they received an experimental drug called ZMapp and it apparently helped both of them. Could that drug be the answer for Africans with Ebola?

Kapila: It impossible to know from just two cases whether a drug will benefit a larger population. Rigorous controlled studies are needed to show that the drug is safe and effective. At what stage of the disease do you use it? Who gets it? Who doesn’t get the drug? All of these issues, and others – including liability, because it’s also possible for the drug to have severe adverse effects – must be settled before medication can be distributed for wider use.

One added complication is that the experimental Ebola drug is in short supply. It is not easy to manufacture this medication. Fifteen years of tireless research have produced just a small quantity of the drug. It is a very complicated manufacturing process where specialized antibodies are developed in tobacco leaves. Many variables can threaten quality control, putting both safety and efficacy in doubt if labs try to produce large amounts of the drug without strict controls. 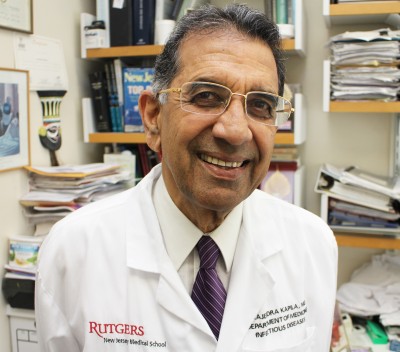 Caption: Rutgers infectious disease physician Rajendra Kapila says it will be extremely complicated both to evaluate and to manufacture an experimental Ebola drug. 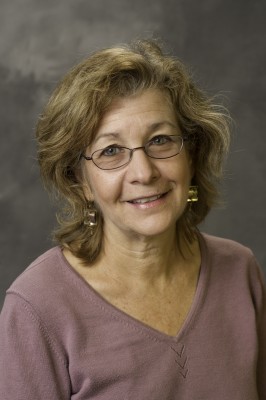