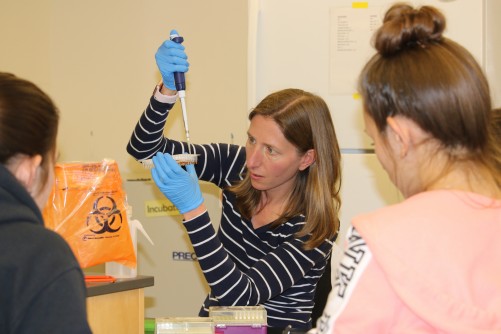 Newswise — SEASIDE, Ca., March 20, 2018 – California State University, Monterey Bay (CSUMB) School of Natural Sciences associate professor Cheryl Logan has been awarded a 2018-19 U.S. Fulbright Scholarship to study coral thermal tolerance in the Galápagos Islands. Her research, which will span a total of five months starting in spring of 2019, will focus on thermal tolerance of corals and help develop a better model for predicting future bleaching.

According to Logan, the Galápagos archipelago, which is part of the Republic of Ecuador, is particularly interesting to this area of research as some corals in that region have proven to be more tolerant than expected in the wake of bleaching events.

“During El Niño events, the water temperature can get quite high and lead to bleaching. During the 1982-83 El Niño event, the first really big one where scientists were recording what was happening, it basically knocked out about 90 percent of the corals in the Galápagos,” said Logan. “Since then, among the corals that did survive, they appear to be more tolerant than expected. In the subsequent global bleaching events, Galápagos corals have done better than expected.”

Part of Logan’s proposed project is to test both cold and warm water conditions as either can lead to bleaching. She’ll be measuring thermal tolerance windows and taking genetic samples to test if corals are better adapted to changing temperatures. Logan explained that identifying unique thermally resistant genotypes is critical for ongoing protection and preservation and that understanding the state of corals in the Galápagos will provide insights into how global reefs may function in the future.

In addition to her research, Logan will co-teach a three-week-long marine ecology course at Universidad San Francisco de Quito (USFQ). This is the first faculty research collaboration between USFQ and CSUMB and is the first step toward building a pathway for future student and faculty exchange between the two institutions.

The five-month research trip will be a family affair for Logan as her husband, a researcher with the Monterey Bay Aquarium, was also awarded a Fulbright of his own.

“My husband, Sal Jorgensen, is a shark ecologist with the Monterey Bay Aquarium and he was also awarded a Fulbright so we plan to take our whole family -- we have a two-year-old and a four-year-old -- to the Galápagos next year for five months.”