An image from the Digitized Sky Survey showing HS Hydrae in the center. 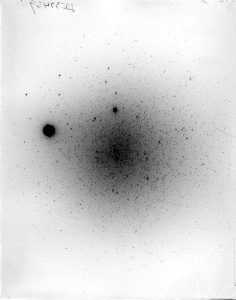 Image of a photographic plate from 1945, which was digitized for the Digital Access to a Sky Century at Harvard, or DASCH, catalog. 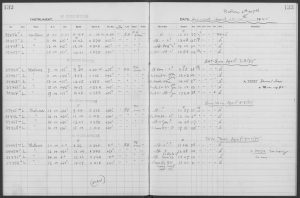 Image of an astronomical log book from 1945. These observations are now part of the Digital Access to a Sky Century at Harvard, or DASCH, catalog.

Newswise — The sun is the only star in our system. But many of the points of light in our night sky are not as lonely. By some estimates, more than three-quarters of all stars exist as binaries — with one companion — or in even more complex relationships. Stars in close quarters can have dramatic impacts on their neighbors. They can strip material from one another, merge or twist each other’s movements through the cosmos.

And sometimes those changes unfold over the course of a few generations.

That is what a team of astronomers from the University of Washington, Western Washington University and the University of California, Irvine discovered when they analyzed more than 125 years of astronomical observations of a nearby stellar binary called HS Hydrae. This system is what’s known as an eclipsing binary: From Earth, the two stars appear to pass over one another — or eclipse one another — as they orbit a shared center of gravity. The eclipses cause the amount of light emitted by the binary to dim periodically.

On Jan. 11 at the 237th meeting of the American Astronomical Society, the team reported more than a century’s worth of changes to the eclipses by the stars in HS Hydrae. The two stars began to eclipse in small amounts starting around a century ago, increasing to almost full eclipses by the 1960s. The degree of eclipsing then plummeted over the course of just a half century, and will cease around February 2021.

“There is a historical record of observations of HS Hydrae that essentially spans modern astronomy — starting with photographic plates in the late 19th century up through satellite images taken in 2019. By diving into those records, we documented the complete rise and fall of this rare type of eclipsing binary,” said team leader James Davenport, a research assistant professor of astronomy at the UW and associate director of the UW’s DIRAC Institute.

The eclipses of the two stars that make up HS Hydrae are changing because another body — most likely a third, unobserved companion star — is turning the orientation of the binary with respect to Earth. Systems like this, which are called evolving eclipsing binaries, are rare, with only about a dozen known to date, according to Davenport. Identifying this type of binary requires multiple observations to look for long-term changes in the degree of dimming, which would indicate that the orientation of the binary is changing over time.

HS Hydrae has such an observational record because, at 342 light- years away, it is a relatively close and bright system and the two stars orbit each other every 1.5 days. Scientists first reported that HS Hydrae was an eclipsing binary in 1965. In a 2012 paper, astronomers based in Switzerland and the Czech Republic reported that the amount of dimming from HS Hydrae decreased from 1975 through 2008, indicating that the two stars were eclipsing smaller and smaller portions of one another over time. That team also predicted that the eclipses would end around 2022.

Davenport and his team checked in on HS Hydrae using observations of the system in 2019 by the NASA’s Transiting Exoplanet Survey Satellite, or TESS. They saw only a 0.0075-magnitude drop in light from HS Hydrae, a sign that the two stars were barely covering one another during eclipses. For comparison, eclipses in 1975 saw a more than 0.5-magnitude drop.

“Fifty years ago, these two stars were almost completely eclipsing each other. By the early 21st century, the degree of eclipse was around 10%, and in the most recent observations from 2019, they barely overlapped,” said Davenport.

With these new data, the team now predicts that HS Hydrae eclipses will cease around February 2021.

The observations from the 1960s through 2019 catalogue the decline of HS Hydrae as an evolving eclipsing binary. But Davenport and his team also uncovered evidence for its rise. The Digital Access to a Sky Century at Harvard, or DASCH, is a digital catalog of photometric data taken from more than a century’s worth of astro-photographic plates at Harvard University. The team mined this record and found observations of HS Hydrae from 1893 through 1955 that they could analyze to search for signs of dimming.

The researchers broke down DASCH observations of HS Hydrae by decade. From the late 19th century through the roaring '20s, HS Hydrae showed no measurable dimming. But things began to change in the 1930s, where they measured a modest 0.1-magnitude drop in brightness. The degree of dimming rose through the 1940s and peaked in the 1950s with a 0.5-magnitude drop in brightness.

Based off this 126-year history of HS Hydrae observations, the team predicts that the system will start eclipsing again around the year 2195. But, that assumes that the third companion — which other teams have predicted is a small, dim M-dwarf star — continues to behave as it has to date.

“We won’t know for sure unless we keep looking,” said Davenport. “The best we can say right now is that HS Hydrae has been changing constantly over the course of modern astronomy.”

Missions like TESS will likely identify more evolving eclipsing binaries in the coming years. This should open new opportunities for astronomers to understand how star systems are built, as well as how they change over time — whether they are busy, dynamic systems like HS Hydrae, or more quiet systems, like ours.

Co-authors on the paper are UW graduate students Diana Windemuth and Jessica Birky; UW researcher Karen Warmbein; Erin Howard at Western Washington University; and Courtney Klein at UC Irvine. The research was funded by NASA, the National Science Foundation, the Heising-Simons Foundation, the Research Corporation for Science Advancement, the DIRAC Institute, the UW Department of Astronomy, the Charles and Lisa Simonyi Fund for Arts and Sciences and the Washington Research Foundation.

Caption: An image from the Digitized Sky Survey showing HS Hydrae in the center.

Caption: Image of a photographic plate from 1945, which was digitized for the Digital Access to a Sky Century at Harvard, or DASCH, catalog.

Caption: Image of an astronomical log book from 1945. These observations are now part of the Digital Access to a Sky Century at Harvard, or DASCH, catalog.