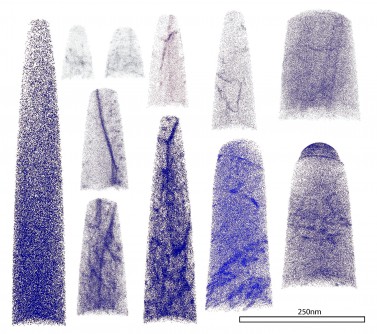 The 11 nano tips used in the study.

Newswise — Research led by the University of Portsmouth has identified a new way to improve how we measure the age of planetary evolution in our solar system.

The study, published in Nature Communications, uses a new atomic-scale imaging approach to locate and count individual atoms in planetary materials. Directly linking the structure and chemistry of minerals in this way opens up new opportunities to understand the spectacular complexity of planetary samples.

Meteorites provide samples that can be used to measure the timing of major planetary events, including lunar magma ocean crystalisation, Martian volcanism and asteroid bombardment of the inner solar system. However, due to shock metamorphism - extreme deformation and heating that occurs during impact events - samples often give a mixed age between the formation of the rock and timing of shock metamorphism.  This makes it difficult to build an accurate timescale of when planetary events occurred.

Using atom probe tomography (APT), the researchers were able to accurately date such events in baddeleyite (ZrO2), a relatively common but small uranium bearing mineral in planetary igneous rocks. Atom probe tomography provides 3D atom-by-atom imaging of materials with a uniquely powerful combination of spatial and chemical resolution. It takes tiny grains of the mineral, approximately 1,000th the width of a human hair, and energises atoms one at a time using a laser. This allows researchers to reconstruct 3D atom scale models of the material, and visualise the extent of deformation. Counting individual uranium and lead atoms within these domains enables accurate radiometric dating of the associated planetary events. The samples were taken from a 1.85 billion year old impact structure at Sudbury, approximately 400 km north of Toronto, Canada.

The research was led by PhD student, Lee White. Lee said: “Because of the challenges scientists face in dating these complex materials, many meteorites could be older than previously thought. This could affect what we think regarding the age of the major planetary events in our solar system.

“The ability to generate targeted, high-precision ages with APT shows great promise when examining tiny baddeleyite grains in meteorites. As we are able to identify and sample at the nanoscale, it opens up new avenues for dating highly deformed materials and provides an exceptional opportunity to accurately measure timings of major solar system events.”

Co-author and Lee’s supervisor Dr James Darling, Senior Lecturer in Geology in the School of Earth and Environmental Sciences, said: “By imaging the location of individual atoms, this new approach provides the incredible ability to resolve how deformation can affect the chemistry of materials. In this case, we have imaged uranium and lead isotopes to essentially see complex patterns of time itself.”

The research was a collaboration with CAMECA Instruments, a major US-based international manufacturer of scientific equipment, and Western University, Canada. James and Lee conducted their analysis at the CAMECA facilities in Madison (Wisconsin, USA) and also at Western University (London, Ontario) in Canada.