VIDEO: Dr. Hoby Wedler, who was born blind and earned a Ph.D. in chemistry from the University of California-Irvine, is shown visualizing scientific data using his sense of touch on a lithophane, which are tactile graphics converted from digital graphics. Dr. Wedler is one of the co-authors of the study. 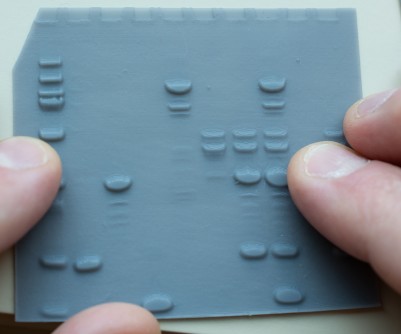 3D-printed lithophanes can help optically impaired scientists “see” data, such as from protein separation gels, with their fingertips.

Newswise — WACO, Texas (Aug. 17, 2022) – A research team led by Baylor University chemists has taken a groundbreaking step forward in eliminating the exclusion of individuals with blindness from chemistry education and experiences. In an article published today in Science Advances, the researchers detail how they used lithophane – an old-fashioned art form – and 3D printing to turn scientific data into tactile graphics that glow with video-like resolution, enabling universal visualization of the same piece of data by both blind and sighted individuals.

Although the lithophane is an ancient artistic medium, it has never been used – until now – to represent scientific data and imagery in a quantitative, controlled manner for tactile visualization and tactile integration.

The Baylor study – “Data for all: Tactile graphics that light up with picture-perfect resolution” – compared how blind and sighted people interpreted lithophane data by touch or eyesight. The participant cohorts tested the five lithophane forms – gel electropherograms, micrographs, electronic and mass spectra, and textbook illustrations – interpreting all five lithophanes by tactile sensing or eyesight at 79% overall accuracy, according to the study.

The researchers focused on creating and testing lithophanes of data found in the chemical sciences because of the explicit and systematic exclusion of students with blindness from chemistry, which the researchers noted “can be viewed as a virtue by educators, parents, peers or self, on the basis of laboratory safety and the ‘visual’ nature of chemistry.”

“This research is an example of art making science more accessible and inclusive. Art is rescuing science from itself,” said Bryan Shaw, Ph.D., professor of chemistry and biochemistry, who leads the Shaw Research Group at Baylor and is corresponding author on the journal article. “The data and imagery of science – for example, the stunning images coming out from the new Webb telescope – are inaccessible to people who are blind. We show, however, that thin translucent tactile graphics, called lithophanes, can make all of this imagery accessible to everyone regardless of eyesight. As we like to say, ‘data for all.’”

New use for old art form

Likely created in China as early as the sixth century and popularized in Europe in the 1800s, lithophanes are thin engravings made from translucent materials (first porcelain and wax, now plastic) and initially appear opaque in ambient light. However, when back lit by any light source – from a ceiling light to sunlight – a lithophane glows like a digital image, with the scattering of light through the translucent material causing thinner regions to appear brighter and thicker regions to appear darker. Using free online software to convert a two-dimensional image to a 3D topograph, scientists in this study used 3D printing for the lithophanes.

“The idea of lithophanes was a concept Dr. Shaw had been playing around with, and I thought it was an amazing opportunity to help a group of individuals that have been stigmatized in the field of chemistry,” said co-lead author Jordan Koone, a doctoral candidate in chemistry at Baylor and member of Shaw’s lab. “It has been awesome to see blind people who have been told their entire life they could not excel in the fields of science interpret data just as easily as a sighted person.”

The participant cohorts included sighted students with or without blindfolds and five persons with blindness who have experienced total blindness or low vision since childhood or adolescence. Four of these individuals with blindness have earned Ph.D. degrees in chemistry before testing, and the fifth person is an undergraduate student at Baylor who experienced complete vision loss as a senior in high school. These blind persons are coauthors of this study but did not participate in the design of the specific datasets.

“Before working on the lithophane project, I believed research was limited to experiments done in a laboratory setting,” said co-lead author Chad Dashnaw, a doctoral candidate in chemistry at Baylor also in Shaw’s lab. “But research is just trying to answer unanswered questions, and our work here is answering a very important one: Can blind persons be a part of STEM? Lithophanes provide a data format that can be universally shared between sighted and blind individuals making STEM more accessible to those who have previously been overlooked.”

The study found that the average test accuracy for all five lithophanes was:

Sighted participants were able to accurately interpret digital images on a computer screen at 88.4% by eyesight. For 80% of questions, the blind chemists’ tactile accuracy was equal or superior to visual interpretation of lithophanes, suggesting that lithophanes could function as a shareable data format. In fact, Shaw said some of the blind chemists in the study has such tactile sensitivity that they could feel tactile features of the data that sighted individuals could barely see themselves.

Study co-author Hoby B. Wedler, Ph.D., an entrepreneur, chemist and CEO of the Wedland Group in Petaluma, Calif., first interpreted lithophane data while on a Zoom call with Shaw. For his study co-authors and fellow chemists, this was a most meaningful moment as Wedler, who was born blind but earned a Ph.D. in theoretical chemistry, saw data for first time by touching high-resolution tactile graphics.

“You can look at this, and it looks exactly what I feel,” Wedler said. “I’ve never felt a mass spec. I never thought I would be able to talk through an analytical dataset like this. The sky is the limit here.”

“They were so excited to finally see the data and imagery that they had heard about for so long. And they did see this data. Because you see with your mind, not your eyes,” Shaw said.

One of the most notable co-authors of the study was Baylor undergraduate student and researcher, Noah Cook. Cook finished his first semester at Baylor this past spring, despite losing all of his vision during his senior year in high school.

“The five blind co-authors on this project are some of the most interesting and hardworking individuals I have ever had the pleasure to work with,” Dashnaw said. “For years they have heard of things like SDS-PAGE or mass spectra. but they had never had the opportunity to observe one for themselves, let alone interpret it. The lithophanes gave them that opportunity. They were able to in detail explain exactly what they were feeling, and it matched up perfectly with what we were seeing.”

This latest study involving Shaw’s group extends Baylor research to remove barriers to the study and discipline of chemistry for K-12 students with blindness or low vision.

Shaw recently was awarded a $1.3 million grant from the National Institutes of Health (NIH) for a first-of-its-kind early intervention project that opens laboratory work and provides tactile chemistry education materials and equipment. Combining high-tech and low-tech approaches, the project blends robotics and technology with educational materials and “lab hacks” that enable students with blindness and low vision to take part in the same roles and routines as their sighted counterparts, including the use of lithophanes.

“The neat thing about the tactile graphics that light up with picture-perfect resolution is that everything I can see with my eyes, another person who is blind can feel with their fingers. So it makes all of the high-resolution imagery and data accessible and shareable, regardless of eyesight. We can sit around with anyone, blind or sighted, and talk about the exact same piece of data or image,” Shaw said.

The five-year grant – in partnership with the Texas School for the Blind and Visually Impaired (TSBVI) in Austin –  is funded through the NIH’s Science Education Partnership Award (SEPA) program, which promotes science, technology, engineering and math (STEM) projects for children in grades K-12.

Shaw and his collaborators are focusing their project initially on high school students by developing a pilot program for 150 TSBVI students to participate in education and curriculum and train on materials on both the school campus and within Shaw’s lab at Baylor. The pilot is expected to launch this fall, with the full program expected to begin in spring 2023 through 2027. In the future, the team hopes to scale the program to include resources for children just beginning the study of science.

The lithophane data format or LDF, and the data for all movement, goes beyond chemistry or science and can be used for any subject matter, from art, history, philosophy and wherever imagery or graphics are used, Shaw said. With this latest research, the path to shareable and accessible data is available to anyone with tactile senses.

For doctoral candidates Koone and Dashnaw, the research highlights one of Baylor’s core values: to facilitate the discovery of new knowledge and research that is for the betterment of humanity.

“Most of the research I do on a daily basis won’t have a significant impact on the scientific community. However, the lithophane project allows for real change in real time,” Dashnaw said. “We are making STEM more accessible to people with vision impairment and calling attention to their systemic exclusion.”

Baylor University is a private Christian University and a nationally ranked Research 1 institution. The University provides a vibrant campus community for more than 20,000 students by blending interdisciplinary research with an international reputation for educational excellence and a faculty commitment to teaching and scholarship. Chartered in 1845 by the Republic of Texas through the efforts of Baptist pioneers, Baylor is the oldest continually operating University in Texas. Located in Waco, Baylor welcomes students from all 50 states and more than 90 countries to study a broad range of degrees among its 12 nationally recognized academic divisions.