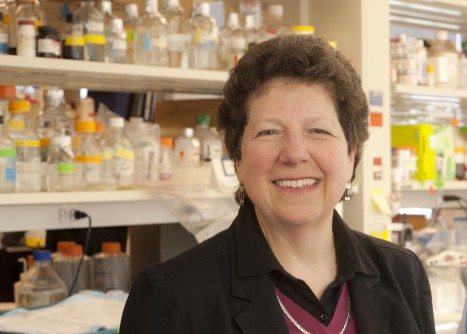 Barbara B. Kahn, MD, Vice Chair for Research Strategy in the Department of Medicine at BIDMC and the George R. Minot Professor of Medicine at Harvard Medical School.

The ADA’s highest scientific honor, the Banting Medal is named after Frederick Banting, the co-discoverer of insulin, and recognizes a scientist for “significant, long-term contributions to the understanding, treatment or prevention of diabetes.”

Kahn is Vice Chair for Research Strategy in the Department of Medicine at Beth Israel Deaconess Medical Center (BIDMC) and the George R. Minot Professor of Medicine at Harvard Medical School. In a career spanning nearly 30 years, she has made landmark contributions to the field of metabolic research, uncovering the complex mechanisms of insulin action, insulin resistance and type 2 diabetes. Her work has led to a new understanding of the role that adipose tissue plays in whole-body glucose homeostasis, a previously unappreciated concept that is now globally accepted and forms the basis of research worldwide aimed at developing new therapies for the treatment of type 2 diabetes and obesity.

“Dr. Kahn’s extraordinary work has led the way for novel strategies to prevent and treat obesity and type 2 diabetes,” said Desmond Schatz, MD, President, Science and Medicine for the American Diabetes Association. “Congratulations, Dr. Kahn, for your transformational leadership in shaping our understanding of the molecular pathogenesis of obesity and type 2 diabetes.”

“Barbara Kahn’s discoveries have challenged the status quo and galvanized new directions in metabolic research,” said Jeffrey S. Flier, MD, Dean of Harvard Medical School and the 2005 recipient of the Banting Medal while a member of the faculty at BIDMC. “The momentum and impact of her work continues to build and pave the way for compelling new treatment strategies for metabolic diseases.”

Beginning with novel studies demonstrating that the AMP-activated protein kinase (AMPK) is critical for systemic regulation of fuel metabolism, Kahn’s laboratory has continued to identify new molecular targets for diabetes prevention and therapy. Her team’s discovery that the adipocyte-secreted protein retinol-binding protein-4 (RBP4) causes insulin resistance and increases type 2 diabetes and cardiovascular risk launched a new field with more than 485 publications from over 100 research groups. Subsequent investigations have led to the recent groundbreaking observation that well-functioning adipose tissue secretes a novel class of anti-diabetic and anti-inflammatory lipids that are reduced in prediabetic and diabetic individuals, a critical discovery which suggests that restoring these lipids could prevent or ameliorate type 2 diabetes.

“As a physician-scientist who continues to maintain an active clinical practice, Barbara Kahn has successfully combined molecular biology and mouse genetics with human research and established an outstanding record of leading-edge bench-to-bedside research,” said BIDMC Chief Academic Officer Vikas P. Sukhatme, MD, ScD. “Her molecular discoveries and their translation into clinical opportunities provide us with promising new strategies to both prevent and treat obesity and type 2 diabetes, two of health care’s most urgent concerns.”

“Barbara Kahn is not only one of endocrinology’s leading scientists, she is an inspiring role model for all women in biomedical science,” said BIDMC Chair of Medicine Mark Zeidel, MD. In addition to being one of only five women to receive the Banting Award since its inception in 1941, Kahn is also one of only two women to ever have received the American Diabetes Association’s Outstanding Scientific Achievement Award for investigators under the age of 45.

Kahn received both BA and MD degrees from Stanford University and a Master’s in Health and Medical Sciences from the University of California, Berkeley. She completed internal medicine residency training and a fellowship in general internal medicine at the University of California, Davis Medical Center. She began her career in molecular research at the National Institutes of Health, where she was a clinical endocrinology fellow.

Kahn joined the Division of Endocrinology, Diabetes and Metabolism at BIDMC in 1986, and served as Chief of the Diabetes Unit from 1990 to 2000 and Division Chief from 2000 to 2011 before becoming Vice Chair of Research Strategy in BIDMC’s Department of Medicine.

A recipient of numerous awards, including the Jacobaeus Prize from the Novo Nordisk Foundation and the Karolinska Institute in Stockholm, Sweden, the Gerald D. Aurbach Award from the Endocrine Society and the Albert Lehninger Award from Johns Hopkins School of Medicine, Kahn is an elected member of the National Academy of Medicine, the American Society for Clinical Investigation and the Association of American Physicians and an elected fellow of the American Association for the Advancement of Science.