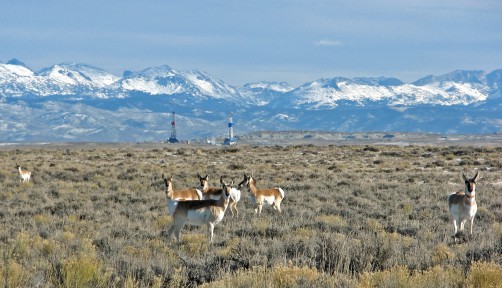 Pronghorn in a gas field in Wyoming

Newswise — Biologists from the U.S., Mexico, and Canada have collaborated for the first time to produce recommendations to protect and manage North America’s fastest land mammal – the pronghorn.

Pronghorn are endemic to North America and numbered an estimated 35 million in the early 19th century. Today, about 700,000 remain and more than half of those live in Wyoming. The guides provide the latest “state-of-the-art” pronghorn management recommendations on such topics as assessing habitat and life histories, harvest, predation, and population dynamics.

“These guides are the product of collaboration across borders,” said co-author Paul Jones, Senior Biologist with Alberta Conservation Association. “This is the first time that biologists from these three nations have joined together in the common interest of informing the conservation and management of pronghorn. No matter what part of the pronghorn range you are living or working in, the issues facing the animals are the same.”

Some of the ongoing priority issues faced among scientists and agency biologists include managing pronghorn under the pressures of industrial development and understanding and mitigating the impacts of linear infrastructure (roads, fences, etc.) on the animals as they move across the landscape. These topics were updated and among those highlighted in this edition of the guide. A new section on pronghorn genetics was added— highlighting its use in determining subspecies taxonomy, population genetics and forensic applications.

Wildlife Conservation Society (WCS) Associate Conservation Biologist and co-author Renee Seidler said, “This document pulled current information from some of our best, current resources on pronghorn management and summarized it all in one place. It will aid biologists, conservationists, managers, and land owners alike in making the most informed decisions for pronghorn conservation.”

As WCS’s Pronghorn Field leader, Seidler researches pronghorn as they journey the “Path of the Pronghorn,” a 6,000 year-old migration between wintering grounds in Wyoming’s Upper Green River Basin and summering grounds in Grand Teton National Park. Within the Path, WCS’s scientific contributions helped inform a highway overpass project at Trapper’s Point Wyoming that was completed in 2012, marking a new era of reduced risk of wildlife/vehicular collisions in the area.

For further information on this story, or to talk with Renee Seidler, please contact Scott Smith at 718-220-3698 or email [email protected].

The guides are a product of the 25th Biennial Pronghorn Workshop held in Santa Ana Pueblo, New Mexico, (2012) that brought together participants from state and provincial wildlife agencies, federal land and wildlife agencies, universities and colleges, wildlife conservationists and others from southern Canada, northern Mexico and the western U.S. to exchange information on pronghorn and their management.

This update of the Pronghorn Management Guides (5th Edition) is dedicated in memory of the lead author, James “Jim” Donovan Yoakum, who chaired the update of this edition. Jorge Cancino, Investigator with Centro de Investigaciones Biológicas del Noroeste, S.Cdescribed Jim as “a leader in pronghorn research, management, and conservation who inspired continued passion for protection of the species.”

• Pronghorn are native to North America and numbered an estimated 35 million in the early 19th century. Today, about 700,000 remain and more than half of those live in Wyoming. • Pronghorn antelope (Antilocapra americana) are not true antelope. Pronghorns however do resemble antelope, which are African and Asian herbivores of a different family.• Pronghorn have been recorded running up to 100 km/h.• Pronghorn have exceptional eyesight and can detect movement up to 6.5 km away• All male pronghorns have horns while approximately only 40% of female pronghorn have horns. • Pronghorn females usually give birth to twins, but there is a high mortality rate of fawns during the first month of life.