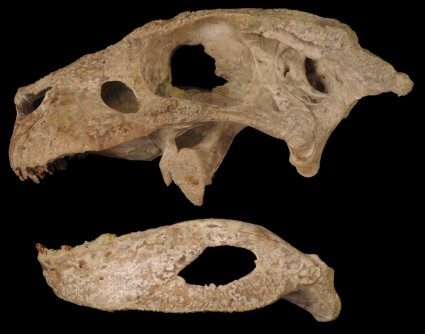 Holotype skull and lower jaw of Simosuchus clarki in side view 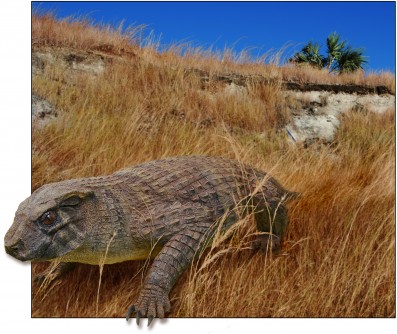 Life reconstruction of Simosuchus clarki as it may have appeared walking through the semi-arid grasslands of Madagascar.

Newswise — The 20-odd species of living alligators and crocodiles are nearly all that remains of what was once an incredibly diverse group of reptiles called crocodyliforms. Recent discoveries of fossil crocodyliforms have revealed that some of these reptiles, instead of conforming to traditional crocodile norms (long snout, conical teeth, strong jaw and long tail) possessed a dazzling array of adaptations that resulted in unique and sometimes bizarre anatomy. These discoveries have provided new information about a large and important group of extinct animals, while simultaneously helping to dispel the notion of crocodiles as static, unchanging ‘living fossils.’ The epitome of crocodyliform bizarreness is represented by Simosuchus clarki, which lived in Madagascar at the end of the “Age of Dinosaurs” (about 66 million years ago). First described preliminarily in 2000 from a well-preserved skull and partial skeleton, Simosuchus shattered the crocodyliform mold with its blunt, pug-nosed snout, leaf-shaped teeth, and short, tank-like body covered in a suit of bony armor. Over the next decade, expeditions to Madagascar recovered more skulls and skeletons, now representing nearly every bone of Simosuchus. A reconstruction of this uncommonly complete fossil reptile and an interpretation of its place in the crocodile evolutionary tree became the subject of a newly published Memoir of the Society of Vertebrate Paleontology. Edited by David W. Krause and Nathan J. Kley of Stony Brook University, the large, densely illustrated volume gives an account of fossil crocodyliform anatomy that is unprecedented in its thoroughness. “The completeness and preservation of the specimens demanded detailed treatment,” said Krause. “It just seemed unconscionable to not document such fantastic fossil material of this unique animal.” A separate chapter is devoted to each of the major parts of the animal – skull, backbone, limbs and armor. “The skull and lower jaw in particular are preserved almost completely,” said Kley. “This, combined with high-resolution CT scans of the most exquisitely preserved specimen, has allowed us to describe the structure of the head skeleton – both externally and internally – in exceptional detail, including even the pathways of the tiniest nerves and blood vessels.” But while it is easy to lose oneself in the details of these incredible fossils, one of the most amazing features is the overall shape of the animal. Two feet long, pudgy, with a blunt snout and the shortest tail of any known crocodyliform, Simosuchus was not equipped to snatch unsuspecting animal prey from the water’s edge as many modern crocodiles do. “Simosuchus lived on land, and its crouched posture and wide body probably meant it was not very agile or fast,” said Joseph Sertich, who participated in the study. In addition, its short, underslung jaw and weak, leaf-shaped teeth show that it probably munched on a diet of plants. While the idea of a gentle, vegetarian crocodile is unusual to us today, the new memoir makes it easy to imagine Simosuchus ambling through its semi-arid grassland habitat, pausing to nip at plants and crouching low to hide from predators like the meat-eating dinosaur Majungasaurus. The paleontologists also found evidence that pointed to the evolutionary origin of Simosuchus. “Interestingly, an analysis of evolutionary relationships suggests Simosuchus’ closest relative lived much earlier, in Egypt,” said Sertich. Details like these are crucial to deciphering the pattern of the dispersal of life around the globe, an area of scientific study known as biogeography. Whatever its ancestry, Simosuchus has set a surprising new standard for what constitutes a crocodile. Said Sertich, “It’s probably the most bizarre in an already very strange group of small, terrestrial crocodiles known from the other southern continents during this time.”

Dr. Christopher Brochu of the University of Iowa agreed. “This is easily the most bizarre crocodyliform ever found.” Brochu, who specializes in fossil crocodyliforms but was not directly involved with the study, explained that this strangeness may have been tied to the special niche Simosuchus occupied in its ecosystem. “A lot of the ecological roles filled by dinosaurs in the north were filled by crocs in the south,” he said. “That led to some really weird crocs.” Brochu also drew a striking contrast between Simosuchus and one modern-day crocodyliform. “Think about everything the slender-snouted forms like the Indian gharial do – long snout with needlelike teeth, jaw joint placed as far back as possible – and Simosuchus does the opposite. Its snout is so short the skull is almost cubical. The teeth are anything but needlelike, and the jaw joint is shoved beneath the ear. It’s doing (and this is a metaphorical “do”) everything it can to not be a gharial.”

As strange as Simosuchus was, the incredible completeness and preservation of its fossils, coupled with an equally impressive scientific investigation, have yielded one of the most comprehensive volumes of crocodyliform anatomy ever to be published. “Very few crocodyliforms – even those alive today – have been subjected to this level of analysis,” said Brochu. “This reference is going to be used for decades.”

ABOUT THE SOCIETY OF VERTEBRATE PALEONTOLOGYFounded in 1940 by thirty-four paleontologists, the Society now has more than 2,400 members representing professionals, students, artists, preparators and others interested in vertebrate paleontology. It is organized exclusively for educational and scientific purposes, with the object of advancing the science of vertebrate paleontology.

The article appears in the Journal of Vertebrate Paleontology 30(6, Supplement) published by Taylor and Francis.