Bone Parts Don't Add Up to Conclusion of Palauan Dwarfs 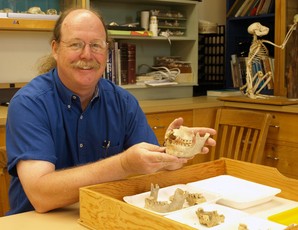 UO researcher Greg Nelson displays a portion of his collection of Palauan jaws with teeth intact that he excavated from a burial site in Palau.

Newswise — Misinterpreted fragments of leg bones, teeth and brow ridges found in Palau appear to be an archaeologist's undoing, according to researchers at three institutions. They say that the so-called dwarfs of these Micronesian islands actually were modern, normal-sized hunters and gatherers.

In a paper published Aug. 27 in PLoS ONE, an open access journal of the Public Library of Science, scientists from the University of Oregon, North Carolina State University and the Australian National University refute the conclusion of Lee R. Berger and colleagues that Hobbit-like little people once lived there.

"Our evidence indicates the earliest inhabitants of Palau were of normal stature, and it counters the evidence that Berger, et al, presented in their paper indicating there was a reduced stature population in early Palau," said University of Oregon anthropologist Greg C. Nelson. "Our research from whole bones and whole skeletons indicates that the earliest individuals in Palau were of normal stature but gracile. In other words, they were thin."

Berger, an American-raised paleoanthropologist at the University of the Witwatersrand in Johannesburg, South Africa, stunned archaeologists in March with his claim -- based on skeletal fragments collected from two caves exposed to tidal activity -- that small-bodied humans may have lived in isolation and suffered from insular dwarfism on the islands 1,000 to 3,000 years ago. Berger initially found fragmented human remains while vacationing in Palau, and returned later for excavations under a grant from the National Geographic Society.

Nelson and NCSU anthropologist Scott M. Fitzpatrick, who earned his doctorate at the UO and based his dissertation on Palauan culture, reviewed full skeletal remains and cultural evidence dating back to almost 3,500 years ago. Their Australian co-author Geoffrey Clark also has studied multiple Palauan cultural sites dating to approximately 3,000 years ago.

They argue that Berger, an expert on much earlier humans dating to the Pleistocene, failed to review existing documentation, much of it published by Nelson or Fitzpatrick. Much of their rebuttal comes from remains unearthed by Fitzpatrick and Nelson at Chelechol ra Orrak, only miles from Berger's two sites. Among these whole remains are bone pieces that match -- some are even smaller that fragments found by Berger -- and come from much larger bodies than those claimed by Berger.

"I think Berger's primary mistakes were his not understanding the variation in the skeletal population in which he was working, using fragmentary remains again in a situation where he didn't understand variation, and stepping outside his own area of expertise, which, I think all scientists try not to do but sometimes we do," Nelson said.

In their paper, Nelson, Fitzpatrick and Clark provide detailed information on the island chain's geography, early migration patterns and cultural history based on a meta-analysis of their own research and studies done by others on the islands.

"Although we have not seen the material that Berger et al base their results on, we can speak to the diversity and normalcy of human skeletal series from throughout the archipelago that have been excavated from several burial caves over the last decade, as well as the an abundance of archaeological, linguistic and historical data indicating a general continuity of cultural traits over a period of three millennia," they wrote in the paper. "Archaeological data also do not suggest a separate isolated group evolving differently (biologically or culturally), although there are subtle differences and changes that occur through time."

"¢ Berger, as his primary evidence of the existence of small stature humans, pointed to fragments of femoral heads, the round balls atop the body's longest bone that connects it to the hip. Nelson concurs that these heads were often small compared to today's humans but that they connected femurs of modern-sized individuals -- with females averaging about 5-foot, 1-inch in height -- who were slightly built and subsisted off available food sources. At least two femoral heads analyzed by Nelson from full skeletons were smaller than those cited by Berger. Having an intact femur provides a usually accurate starting point for extrapolating body height.

"¢ Berger argued that his fragmentary cranial evidence indicated brow ridges common to very ancient human foreheads (picture those of Neanderthals). Nelson and colleagues argue that all cranial measurements they analyzed point to modern-sized heads. They also noted that limestone dissolved in water -- very common to the island chain's karst environment -- running across bodies buried at or just below the surface will create the easily misinterpreted lumpy appearance on brow ridges.

"¢ Berger said teeth and orthodontia fragments suggested megadontism -- abnormally large teeth, a condition common in the pre-modern, small-bodied hominins that he often studies. Nelson says that large teeth were indeed common in early Palauans but simply reflected a hunter-gatherer society. Smaller teeth evolved as cultures turned to agriculture, he said. "Had [Berger's team] compared their scant dental metric data with those of other regions in the Pacific, or elsewhere in the world, they would have seen that large teeth are not uncommon in early peoples of these regions," Nelson and colleagues wrote.

"One of his biggest mistakes was rushing to publish," Nelson said of Berger. "He did not take the time to understand the area in which he was working -- its entire history, not just the skeletal stuff," he said. "Any time you work anywhere, you have to understand this history. You just can't walk in and cowboy it, pull some stuff out and draw conclusions in the absence of understanding the bigger picture."