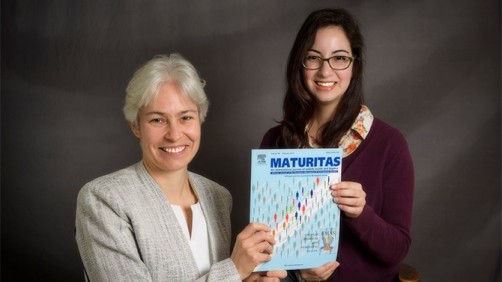 In a review of previous studies, Melissa Melby and student Dunia Tonob have found that women frequently use alternative treatments to manage menopause.

Newswise — A review of previous studies about how women manage menopause symptoms has found that they frequently use alternative treatments but often do not inform their doctors about them.

The study, which was accepted and published online by the journal Maturitas, is written by University of Delaware student Dunia Tonob and faculty member Melissa Melby, associate professor of anthropology.

Tonob, a senior majoring in anthropology, is the first author on the paper, an accomplishment Melby calls “remarkable” for an undergraduate.

In the collaboration with Melby, Tonob conducted a literature review — collecting, assessing and synthesizing previously published information on the subject of menopause and what is called CAM, or complementary and alternative medicine. It had been about seven years since such a wide-ranging review was undertaken, said Melby, who specializes in the biological and medical aspects of anthropology.

“We wanted to step back and take a broader view of how physicians can relate to their patients who may or may not be using CAM,” Tonob said.

She and Melby looked at three types of health approaches that are considered complementary or alternative: natural products, such as herbal or soy remedies; mind-body practices, including yoga and meditation; and traditional Chinese and Japanese (Kampo) medicine.

“Menopausal women use alternative medicine at very high rates,” Melby said, often because they don’t feel that biomedical treatments have been helpful or that such treatments are too aggressive. In turn, she said, doctors often seem dismissive of CAM and can be quick to label any benefits a woman experiences as a placebo effect.

The study she and Tonob conducted seeks to raise awareness among healthcare providers about the use of CAM and open lines of communication with their patients.

“Biomedical practitioners who make an effort to learn about CAM and ask patients about their CAM use or interest may dramatically improve the patient-provider relationship and rapport,” they write in a summary of their paper. “By working with women to integrate their CAM-related health-seeking behaviors and treatments, providers may also boost the efficacy of their own biomedical treatments.”

The collaboration came about when Tonob, who plans to become a doctor, approached Melby about ways to raise her writing skills to a higher academic level. She excelled at writing assignments for her courses but wanted to get experience in the kinds of scientific writing that is done for professional publications.

Melby, who has conducted research in Japan and on alternative remedies used in menopause, was considering a request from Maturitas for a literature review on the subject. Tonob, who was writing a senior thesis about how people use alternative medicine, had also spent time shadowing doctors in China as a Plastino Scholar last year.

Tonob’s interests and abilities made her a great fit for the Maturitas project, Melby said.

“Writing for publication is a very different process than writing for class,” said Tonob, recalling the numerous revisions and rewrites she and Melby did in preparing the paper for submission. “I’m very happy that I got this experience in writing for a wider audience than a class paper.”

Tonob plans to attend medical school, but she’s first taking time to earn a master’s degree in medical anthropology at Oxford University, which she will attend in the fall.

Providing direct care to patients remains her career goal, she said, “but I also fell in love with the field” of medical anthropology.

Maturitas is an international, multidisciplinary, peer-reviewed scientific journal of post-reproductive health in both genders, ranging from basic science to health and social care. It is the official journal of the European Menopause and Andropause Society and is also affiliated with the Australasian Menopause Society.

The article by Tonob and Melby is available here.