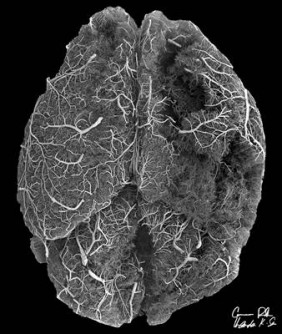 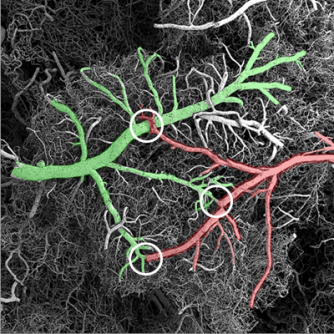 Tocotrienol, a type of vitamin E, appears to help remodel blood vessels in the brain that jump into action during a stroke, redirecting blood around the blockage, and preventing brain damage.

Newswise — Columbus, OH. Dr. Cameron Rink is pointing at a picture of a brain in the middle of a stroke. Dark feathery arteries branch across grayish brain tissue, some of which has faded into black around the obstructed blood vessels, looking like a city block that’s lost power while the rest glows on.

“That part of the brain is not getting blood or oxygen and the cells are dying. There’s not much we can do for a patient at this point and that’s frustrating,” says Rink, a professor of surgery at The Ohio State University Wexner Medical Center.

His frustration is well founded. After 25 years and the failure of more than 1,000 experimental neuroprotective drugs, only aspirin and tPA, the ‘clot-busting’ drug are currently available to patients after they’ve had stroke – and tPA can only be used in about 4% of all stroke cases.

Convinced that the “after the fact” approach to stroke doesn’t do enough to prevent disability and death, for the past 12 years, Rink has focused his research on stroke prevention – research that is beginning to pay off.

In published animal studies, Rink's lab has discovered that brain damage during a stroke can be prevented by triggering the surrounding blood vessels to dilate and redirect the blood flow around a blockage.

The blood vessel “redirect” is the result of 10 weeks’ worth of supplementation with a little-known type of vitamin E called tocotrienol. Tocotrienol appears to stimulate arteriogenesis – or the remodeling of existing blood vessels that can instantaneously expand in response to a demand for oxygen-rich blood. This collateral blood supply can make a major difference in stroke outcomes.

“We know that people who have good collaterals have better recovery from strokes. We think that tocotrienol helps improve the function of collaterals, which would offer someone better protection from an initial or secondary stroke,” says Rink, who is currently participating in a study of stroke survivors to see if the supplement can help prevent or reduce damage from secondary strokes – which can often be more disabling and costly than the first stroke.

To find out exactly how tocotrienol is impacting blood vessel remodeling, Rink pioneered a technique using laser capture microdissection (LCM) to take microscopic pieces of brain tissue and blood vessels from the exact area where collaterals are called into action during a stroke.

The LCM samples also give Rink a chance to study micro-RNA activity during a stroke. Micro-RNAs are tiny snippets of non-coding DNA that turn off the production of proteins created by genes, proteins that give cells a range of different instructions. By identifying the micro-RNAs, Rink will be able to find out what’s happening at a genetic level during a stroke, and how tocotrienol may be influencing those genes.

Tocotrienol, found naturally in palm oil, is a vitamin E variant and currently available in stores as an oral nutritional supplement. Because it doesn’t appear to interfere with other stroke therapies like blood thinners, or have any other side effects, Rink thinks that the vitamin could someday become a common stroke prevention strategy, much like low-dose aspirin is currently recommended for cardiac patients.

Rink was awarded pilot funding from Ohio State's Center for Clinical and Translational Science (CCTS) in 2012 to study tocotrienol’s impact on stroke, and has been studying the supplement for the past two years. His initial findings led to additional funding from the American Heart Association, and he is aiming to apply for an RO1 grant in the next two years after the publication of several more animal and human studies.

“The animal studies are helping inform the optimal tocotrienol dose and therapeutic window for our human studies, so it’s a great example of how the basic research is informing clinical studies, and helping us move the research forward faster,” notes Rink. 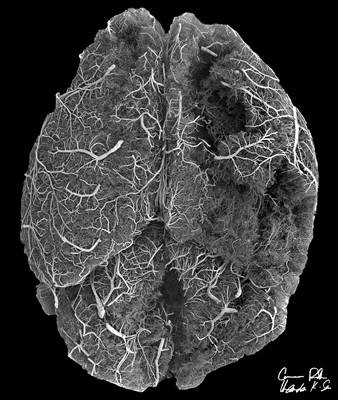 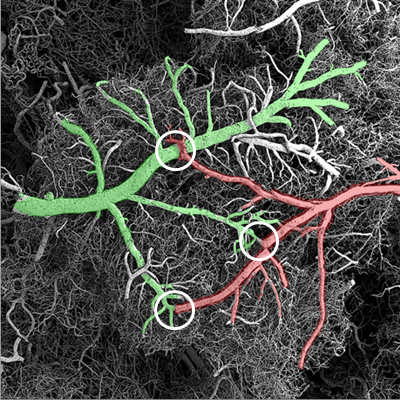 Caption: Tocotrienol, a type of vitamin E, appears to help remodel blood vessels in the brain that jump into action during a stroke, redirecting blood around the blockage, and preventing brain damage.