Breaking the infertility cycle: Sheep could show us the way 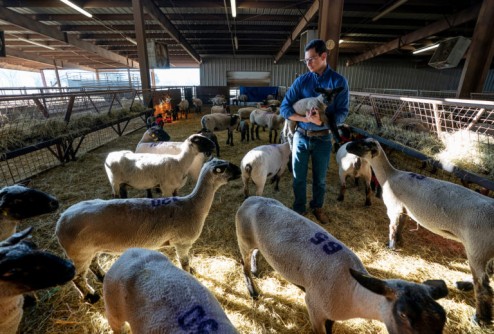 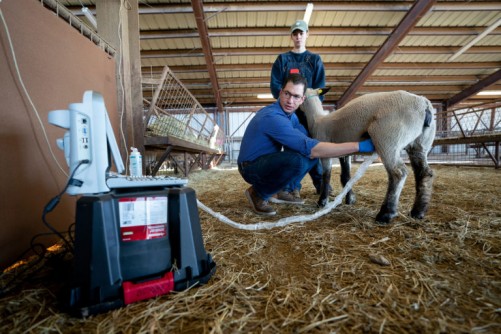 Rodolfo Cardoso, Ph.D., checks for fertility in a sheep with a sonogram at the Texas A&M University Department of Animal Science Physiology Field Laboratory.

Newswise — A Texas A&M AgriLife study with sheep may soon help address fertility problems in women, if it can discover ways to break the chain of generational transfer of polycystic ovary syndrome, PCOS — one of the most common infertility disorders.

Rodolfo Cardoso, DVM, Ph.D., Department of Animal Science assistant professor and reproductive physiologist in Texas A&M’s College of Agriculture and Life Sciences, will lead a $2.4 million National Institutes of Health-funded project that will investigate the multigenerational effects of prenatal exposure to androgen excess using the sheep as the animal model.

Joining Cardoso on this project are Renata Landers, Ph.D., a post-doctoral research associate in Cardoso’s program, Jessica Sustaita, a graduate student in Cardoso’s team, and Vasantha Padmanabhan, Ph.D., professor in the Department of Pediatrics with the University of Michigan Health System, who will also serve as a principal investigator in the project.

PCOS affects about 5 million women in the U.S. and over 100 million women worldwide. It is a complex syndrome that includes an increased risk of cardiovascular disease, dyslipidemia, hypertension, diabetes mellitus and endometrial cancer.

Findings from this sheep model will provide crucial biological information for improving reproductive function across generations and are of clinical relevance to women with PCOS and other hyperandrogenic fertility disorders.

A critical concern of PCOS is the vertical transmission of unwanted traits to the offspring. A woman who has PCOS is highly likely to pass that to her daughters and granddaughters, Cardoso said. Sheep are very similar in that the daughters of ewes with PCOS also typically have the syndrome.

“The sheep is an animal model that is very translational to humans,” Cardoso explained. “When we look at what happens during fetal life, the development of the ovine fetus parallels that of humans. While much of biomedical work uses rodents in research, our ability to translate our findings are much easier and clinically relevant to humans when using sheep. Other key benefits are that sheep only generate one or two fetuses, not a litter, and they have a gestation process more similar to humans.”

Approximately 70% of women with PCOS are obese or overweight with metabolic complications, he said. It is well documented that if women are able to lose weight and improve metabolic function, they can improve their fertility. Also, it is known that whatever happens to a baby during fetal development can affect the health of that individual throughout life and can also carry over to the next generation upon reproduction.

“What we are trying to answer with this project is how to break this multigenerational cycle using dietary interventions,” Cardoso said. “The goal is to prevent the animals from becoming obese and thus prevent the vertical transmission of the PCOS traits.”

It would take 20 or more years to answer the question in humans. The dietary changes would be made with the mother while she was carrying the fetus, but then would require waiting until that daughter grows up and has a daughter.

“With sheep, we can answer the question much quicker. Within three years we will have the daughter that reaches puberty and soon have a granddaughter present that we can investigate the effects of the dietary interventions.”

He said the mothers received an androgen treatment during pregnancy. The androgen treatment mimics the conditions or disease that occur in humans that elevate their level of steroid hormones during pregnancy, such as PCOS and congenital adrenal hyperplasia. The androgen levels in humans can also be raised during pregnancy in other situations such as when women who are unaware they are pregnant continue to take contraceptive pills or after exposure to environmental compounds that act in a similar way to steroid hormones.

“We know these sheep will have PCOS and we know when their daughters reproduce, they will develop PCOS. We will do the dietary intervention with those daughters and then study the granddaughters,” Cardoso said.

In the first four years of this study, Cardoso said they will use dietary interventions or lifestyle modifications to improve the health of the pregnant females and then track the multi-generational impacts to understand if it worked and if the lifestyle interventions help.

The final year will concentrate on epigenetics studies, identifying mechanisms by which prenatal androgen exposure and dietary interventions can control how specific genes are expressed.

“We know diet plays an important role in the cross-generational expression of genes,” he said. “We know in humans that lifestyle intervention will improve PCOS. But what we don’t know is if we can minimize the risk of that being passed to daughters and granddaughters. If we learn the mechanisms of how the diet is improving the health – we may identify therapeutic targets for improving health and fertility in women with PCOS.”