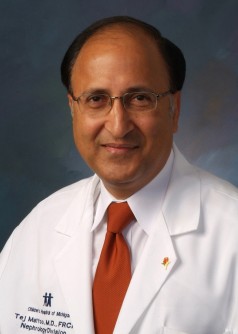 Newswise — DETROIT — A major new pediatric research study led by a Wayne State University researcher, funded by the National Institute of Diabetes and Digestive and Kidney Diseases of the National Institutes of Health (NIH) and published this week in the New England Journal of Medicine (NEJM), has “major implications” for the treatment of urinary tract infections (UTIs) in millions of American children. The largest study of its kind in the world, it provides convincing evidence that children with a common urinary-tract abnormality known as “vesicoureteral reflux” (or “VUR”) experience a significantly reduced risk of developing frequent UTIs when treated with long-term low-dose antibiotics. Because about one-third of children diagnosed with UTIs are also found to have VUR (a chronic condition in which urine refluxes from the bladder and spills back into the kidney, thus increasing the risk of UTIs and renal scarring), treating children with VUR with daily, low-dose, long-term antibiotics can be effective in protecting them from urinary tract infections, according to the authors of the study.

“This newly published study has major implications for the management of UTIs in children,” said Tej Mattoo, professor of pediatrics at Wayne State University’s School of Medicine and chief of Pediatric Nephrology and Hypertension at the Children’s Hospital of Michigan at the DMC. “Our clinical trial analyzed pediatric research data collected during 6 years at 19 different sites in the United States, and what we found was that children with VUR who received antibiotics long-term were 50% less likely to develop recurrent UTIs.”

UTIs can be a significant health problem for kids because of the medical complications that often accompany them. Such recurring infections can also cause significant discomfort for affected children, along with frequent visits to emergency rooms, which add to the already soaring cost of medical care.

More than 3 percent of all American children develop UTIs each year and their infections account for more than 1 million visits to pediatricians annually according to the U.S. Department of Health and Human Services.

“This health problem affects tens of millions of kids each year, and up until now, there has been no study like this to show convincingly that treating children, who have both UTIs and VUR with long-term, low-dose antibiotics reduces their risk of infections significantly,” said Mattoo. “There has been a great deal of debate on that question during the past ten to fifteen years, but this new study should end that debate. The data in the study are compellingly clear – and will help clinicians achieve appropriate management and counseling of children after their first urinary tract infection.”

Mattoo is an internationally recognized researcher in the field of pediatric kidney disease. He pointed out that the prospective, randomized, placebo-controlled study, Antimicrobial Prophylaxis for Children with Vesicoureteral Reflux, looked at 607 children with vesicoureteral reflux diagnosed after UTI between 2007 and 2011. The study found that the children who received long-term antibiotics developed 50% fewer UTIs than the children in the control group who did not receive the antibiotic therapy.

“I think the implications of the study send a very hopeful message to all of us who have struggled so hard in recent years to determine just how effective antibiotic prophylaxis is in protecting children with VUR from recurrent urinary tract infections and renal scarring,” said Mattoo.

“According to the study, we now have a much clearer understanding of the relationship between UTI and VUR, and that has clinical implications that are very positive, indeed.”

The results of the study were also presented at the May 3-6, 2014, Pediatric Academic Societies Congress in Vancouver, Canada, where Mattoo outlined the potential impact of the study on the current guidelines for the management of urinary tract infection and vesicoureteral reflux in children.

The grant number for this National Institutes of Health research project is DK074062.

About Wayne State UniversityWayne State University is one of the nation’s pre-eminent public research universities in an urban setting. Through its multidisciplinary approach to research and education, and its ongoing collaboration with government, industry and other institutions, the university seeks to enhance economic growth and improve the quality of life in the city of Detroit, state of Michigan and throughout the world. For more information about research at Wayne State University, visit http://www.research.wayne.edu.

Children’s Hospital of Michigan is one of eight hospitals operated by the Detroit Medical Center (DMC). The DMC is proud to be the Official Healthcare Services Provider of the Detroit Tigers, Detroit Red Wings and Detroit Pistons.