Bring the Language Lab to the Classroom

An in-classroom laboratory approach promises a real-world look at strategies to help students with language and learning difficulties. 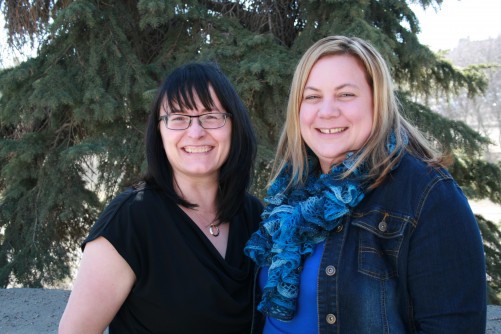 Laureen McIntyre and Laurie Hellsten are bringing their lab to Saskatchewan schools to learn more about teaching children with language difficulties.

Newswise — SASKATOON – A new in-classroom laboratory approach by University of Saskatchewan (U of S) researchers Laureen McIntyre and Laurie Hellsten promises to provide a real-world look at assessment and teaching strategies for students with speech, language and learning difficulties.

“When you address language problems you are not only helping kids be more effective communicators, you’re also laying the foundation for literacy skills and learning later in life,” McIntyre said.

She emphasizes it is important to identify and deal with language and learning difficulties and disorders as early as possible, while children’s brains are rapidly developing and more open to learning opportunities than later in life.

“There’s a lot of research that says if you spend more money on interventions in the earlier years, you’re going to have less money spent in later years,” McIntyre said.

One of the research challenges for McIntyre and Hellsten, both in the Department of Educational Psychology and Special Education at the U of S, is to gather realistic information on how instructors present, and students respond to, various teaching strategies. As the researchers explain, stick a camera in front of a kid and they’re likely to freeze up—or ham it up.

Now, thanks to an $85,000 grant from the Canada Foundation for Innovation, McIntyre and Hellsten are poised to set up the Community-Based Observation Laboratory (COL). The lab has two components: three portable field stations and a central computer data analysis centre at the College of Education. The lab will form a node of the U of S Social Sciences Research Laboratories.

Hellsten explained her role is to provide the nuts-and-bolts tools for the work.

“I’m an assessment developer, test developer and critic,” she said. “In our particular study we’re looking at, ‘can we create something culturally appropriate and age-appropriate?’”

The field stations consist of audio and video recording equipment that can be set up to unobtrusively observe students and teachers in action. Microphones, headsets and laptops will allow the researchers to be present, but at a more non-distracting distance. Initially, they will be deployed at participating schools within the Prairie Spirit School Division near Saskatoon, but McIntyre emphasizes they can be used anywhere, particularly in under-served rural, northern and Indigenous communities.

“Overall, rural students don’t do as well as their urban counterparts on literacy achievement assessments, and their high school dropout rates are higher,” McIntyre said.

She added the problem is particularly acute for Indigenous peoples, who have a younger demographic and are often isolated in rural and northern communities.

Ultimately, McIntyre and Hellsten want to develop tools to help teachers identify children who are struggling with language and literacy as early as possible, along with strategies to help them succeed, from grade school to university.

“These challenges—they typically don’t go away on their own,” McIntyre said.