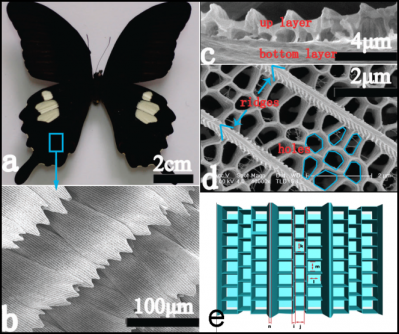 EMBARGOED FOR RELEASE: Monday, March 26, 2012, 1:45 p.m. Eastern TimeNote to journalists: Please report that this research was presented at a meeting of the American Chemical Society

A press conference on this topic will be held at 5 p.m. Eastern Time, March 26, 2012, in the ACS Press Center, Room 15A, in the San Diego Convention Center. Reporters can attend in person or access live audio and video of the event and ask questions at www.ustream.tv/channel/acslive.

Newswise — SAN DIEGO, March 26, 2012 — Butterfly wings may rank among the most delicate structures in nature, but they have given researchers powerful inspiration for new technology that doubles production of hydrogen gas — a green fuel of the future — from water and sunlight. The researchers presented their findings here today at the American Chemical Society’s (ACS’) 243rd National Meeting & Exposition.

Tongxiang Fan, Ph.D., who reported on the use of two swallowtail butterflies — Troides aeacus (Heng-chun birdwing butterfly) and Papilio helenus Linnaeus (Red Helen) — as models, explained that finding renewable sources of energy is one of the great global challenges of the 21st century. One promising technology involves producing clean-burning hydrogen fuel from sunlight and water. It can be done in devices that use sunlight to kick up the activity of catalysts that split water into its components, hydrogen and oxygen. Better solar collectors are the key to making the technology practical, and Fan’s team turned to butterfly wings in their search for making solar collectors that gather more useful light.

“We realized that the solution to this problem may have been in existence for millions of years, fluttering right in front of our eyes,” Fan said. “And that was correct. Black butterfly wings turned out to be a natural solar collector worth studying and mimicking,” Fan said.

Scientists long have known that butterfly wings contain tiny scales that serve as natural solar collectors to enable butterflies, which cannot generate enough heat from their own metabolism, to remain active in the cold. When butterflies spread their wings and bask in the sun, those solar collectors are soaking up sunlight and warming the butterfly’s body.

Fan’s team at Shanghai Jiao Tong University in China used an electron microscope to reveal the most-minute details of the scale architecture on the wings of black butterflies — black being the color that absorbs the maximum amount of sunlight.

“We were searching the ‘art of blackness’ for the secret of how those black wings absorb so much sunlight and reflect so little,” Fan explained.

Scientists initially thought it was simply a matter of the deep inky black color, due to the pigment called melanin, which also occurs in human skin. More recently, however, evidence began to emerge indicating that the structure of the scales on the wings should not be ignored.

Fan’s team observed elongated rectangular scales arranged like overlapping shingles on the roof of a house. The butterflies they examined had slightly different scales, but both had ridges running the length of the scale with very small holes on either side that opened up onto an underlying layer.

The group used actual butterfly-wing structures to collect sunlight, employing them as templates to synthesize solar-collecting materials. They chose the black wings of the Asian butterfly Papilio helenus Linnaeus, or Red Helen, and transformed them to titanium dioxide by a process known as dip-calcining. Titanium dioxide is used as a catalyst to split water molecules into hydrogen and oxygen. Fan’s group paired this butterfly-wing patterned titanium dioxide with platinum nanoparticles to increase its water-splitting power. The butterfly-wing compound catalyst produced hydrogen gas from water at more than twice the rate of the unstructured compound catalyst on its own.

“These results demonstrate a new strategy for mimicking Mother Nature’s elaborate creations in making materials for renewable energy. The concept of learning from nature could be extended broadly, and thus give a broad scope of building technologically unrealized hierarchical architecture and design blueprints to exploit solar energy for sustainable energy resources,” he concluded.