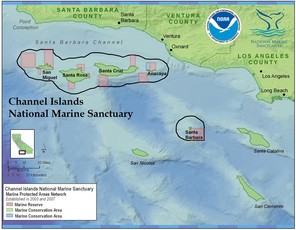 Map shows California's Channel Islands with the islands of the previously combined islands of Santarosae encircled at the top. 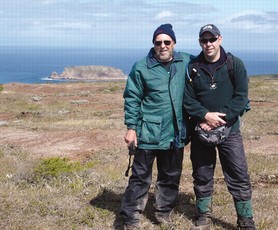 Father and son team: James, left, of UC Santa Barbara and Doug Kennett of the University of Oregon 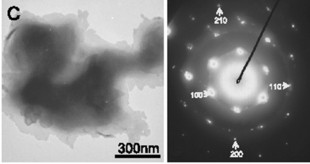 Newswise — A 17-member team has found what may be the smoking gun of a much-debated proposal that a cosmic impact about 12,900 years ago ripped through North America and drove multiple species into extinction.

In a paper appearing online ahead of regular publication in the Proceedings of the National Academy of Sciences, University of Oregon archaeologist Douglas J. Kennett and colleagues from nine institutions and three private research companies report the presence of shock-synthesized hexagonal diamonds in 12,900-year-old sediments on the Northern Channel Islands off the southern California coast.

These tiny diamonds and diamond clusters were buried deeply below four meters of sediment. They date to the end of Clovis -- a Paleoindian culture long thought to be North America's first human inhabitants. The nano-sized diamonds were pulled from Arlington Canyon on the island of Santa Rosa that had once been joined with three other Northern Channel Islands in a landmass known as Santarosae.

The diamonds were found in association with soot, which forms in extremely hot fires, and they suggest associated regional wildfires, based on nearby environmental records.

Such soot and diamonds are rare in the geological record. They were found in sediment dating to massive asteroid impacts 65 million years ago in a layer widely known as the K-T Boundary. The thin layer of iridium-and-quartz-rich sediment dates to the transition of the Cretaceous and Tertiary periods, which mark the end of the Mesozoic Era and the beginning of the Cenozoic Era.

"The type of diamond we have found -- Lonsdaleite -- is a shock-synthesized mineral defined by its hexagonal crystalline structure. It forms under very high temperatures and pressures consistent with a cosmic impact," Kennett said. "These diamonds have only been found thus far in meteorites and impact craters on Earth and appear to be the strongest indicator yet of a significant cosmic impact [during Clovis]."

The age of this event also matches the extinction of the pygmy mammoth on the Northern Channel Islands, as well as numerous other North American mammals, including the horse, which Europeans later reintroduced. In all, an estimated 35 mammal and 19 bird genera became extinct near the end of the Pleistocene with some of them occurring very close in time to the proposed cosmic impact, first reported in October 2007 in PNAS.

In the Jan. 2, 2009, issue of the journal Science, a team led by Kennett reported the discovery of billions of nanometer-sized diamonds concentrated in sediments -- weighing from about 10 to 2,700 parts per billion -- in six North American locations.

"This site, this layer with hexagonal diamonds, is also associated with other types of diamonds and with dramatic environmental changes and wildfires," said James Kennett, paleoceanographer and professor emeritus in the Department of Earth Science at the University of California, Santa Barbara.

"There was a major event 12,900 years ago," he said. "It is hard to explain this assemblage of materials without a cosmic impact event and associated extensive wildfires. This hypothesis fits with the abrupt cooling of the atmosphere as shown in the record of ocean drilling of the Santa Barbara Channel. The cooling resulted when dust from the high-pressure, high-temperature, multiple impacts was lofted into the atmosphere, causing a dramatic drop in solar radiation."

The hexagonal diamonds from Arlington Canyon were analyzed at the UO's Lorry I. Lokey Laboratories, a world-class nanotechnology facility built deep in bedrock to allow for sensitive microscopy and other high-tech analyses of materials. The analyses were done in collaboration with FEI, a Hillsboro, Ore., company that distributes the high-resolution Titan microscope used to characterize the hexagonal diamonds in this study.

These findings are inconsistent with the alternative and already hotly debated theory that overhunting by Clovis people led to the rapid extinction of large mammals at the end of the ice age, the research team argues in the PNAS paper. An alternative theory has held that climate change was to blame for these mass extinctions. The cosmic-event theory suggests that rapid climate change at this time was possibly triggered by a series of small and widely dispersed comet strikes across much of North America.

The National Science Foundation provided primary funding for the research. Additional funding was provided by way of Richard A. Bray and Philip H. Knight faculty fellowships of the University of Oregon, respectively, to Kennett and UO colleague Jon M. Erlandson, a co-author and director of the UO's Museum of Natural and Cultural History.

About the University of Oregon

The University of Oregon is a world-class teaching and research institution and Oregon's flagship public university. The UO is a member of the Association of American Universities (AAU), an organization made up of the 62 leading public and private research institutions in the United States and Canada. The UO is one of only two AAU members in the Pacific Northwest.