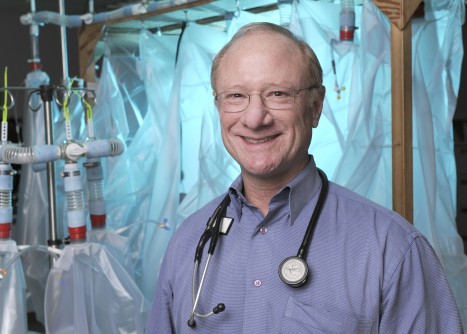 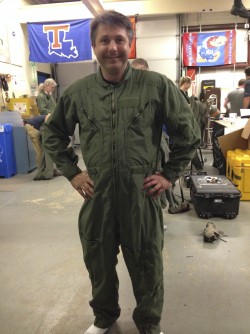 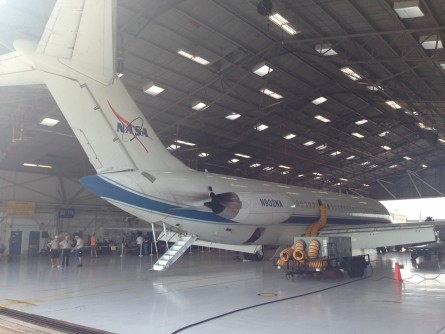 The plane used to generate zero gravity is called the “Weightless Wonder.”

Newswise — DALLAS – August 19, 2015 – UT Southwestern Medical Center researchers, in conjunction with NASA, will take four volunteer cancer patients on a zero-gravity ride into the upper atmosphere to study why zero-gravity conditions on the International Space Station sometimes affect the vision of astronauts staying there for extended periods.

The four volunteer cancer patients have permanent ports for delivery of chemotherapy, which provides a unique opportunity for researchers to take readings about pressure changes within the brain. The steep up-and-down flights into the upper atmosphere create 20-second intervals of weightlessness. Each volunteer underwent pretesting to ensure the flight would be safe for their vision and would not negatively affect their cancer treatments.

“I harkened back to my residency days working with leukemia patients and remembered that some patients have these ports – they’re called Ommaya reservoirs – placed to deliver chemotherapy to cancer microcells in the brain,” said lead researcher Dr. Benjamin Levine, Director of the Institute for Exercise and Environmental Medicine (IEEM) at Texas Health Presbyterian Hospital Dallas, a partnership between UT Southwestern and Texas Health Resources. “Sometimes they take the ports out, but often it is riskier to take them out and patients elect to leave them in. I scoured the country to find these patients.”

In 2014, NASA pilots flew four men in the parabolic flight pattern that NASA uses to give astronauts in training experience in zero gravity. As the C-9 plane repeatedly dove from 34,000 feet to 26,000, Dr. Justin Lawley, a postdoctoral researcher at the IEEM, recorded their intracranial pressure and other key physiological measurements.

This year, three women and one man will experience the thrill of weightlessness as a NASA C-9 climbs to 34,000 feet, then swoops down to 26,000 feet again and again. Forty times the plane will climb and then drop, creating 40 intervals of weightlessness, and recordings to match.

Dr. Louis (Tony) Whitworth, Associate Professor of Neurological Surgery and Radiation Oncology at UT Southwestern, was the neurosurgeon in charge of accessing the patients’ ports.

“All of the subjects did just fine. We had no problems, so I got to enjoy the weightlessness. I’m a bit of an adrenalin junkie, so it was pure fun,” said Dr. Whitworth, who accompanied the patients on their flights.

Cherri Pepper-Holman, of Pauls Valley, Okla., one of this year’s subjects, said she had never been on a commercial airplane until she flew to Dallas to be prepped for her upcoming flight. Ms. Pepper-Holman, who has acute lymphoblastic leukemia, is scheduled to receive a T-cell transplant, which will affect her immune system and require her to be in isolation for three months. “This is something fun to do before I go in to have the transplant,” she said.

Growing up in Orlando, Fla., Trent Barton, another of the four test subjects in this year’s flights, witnessed space shuttle launches at nearby Cape Canaveral. “I saw every last one. Many times we watched them live at the space center. Other times we could walk out the back door and watch. You just had to know which direction to look.”

Although watching so many space shuttle launches piqued Mr. Barton’s interest in spaceflight, it was his experience as a cancer patient that caused him to volunteer to participate in the research. “When I had cancer, so many people donated to me and my family. That was the hand of God giving to us,” said Barton, who now lives in Dallas. “This is my opportunity to give back.”

The Institute for Exercise and Environmental Medicine studies human physiology across the life span, especially physiology under extreme conditions. Dr. Levine set out to test NASA’s hypothesis that long-term increased pressure in the brain caused by the zero-gravity environment leads to the vision deterioration experienced by astronauts. Last year’s results showed that while intracranial pressure rose during the periods of zero gravity, it did not rise as much as it rose when the four subjects were placed in a flat, sleeping position.

“It cannot be that this eye problem is due to a pathologically elevated pressure in the brain because it’s not higher than it is when you are lying down sleeping every night,” said Dr. Levine, who holds the Distinguished Professorship in Exercise Sciences. “The thing is, though, on Earth, we stand up. In space, it’s unremitting. You can’t ‘sit up’ in zero gravity. And so, it may be that even a mildly elevated intracranial pressure, without the daily lowering of the pressure by being upright, is what’s causing that adaptive change in the back of the eye.”

About the Institute for Exercise and Environmental Medicine

The Institute for Exercise and Environmental Medicine (IEEM) was founded as a joint program between UT Southwestern Medical Center and Texas Health Presbyterian Hospital Dallas. Its mission is to promote basic and clinical research, education, and clinical practice in defining the limits to human functional capacity in health and disease, with the objective of improving the quality of life for human beings of all ages. The IEEM includes 10 major laboratories tightly integrated and organized intellectually along the “oxygen cascade” — the path that oxygen must follow through the body from the external environment through the lungs, heart, and skeletal muscle to perform cognitive function and physical activity.