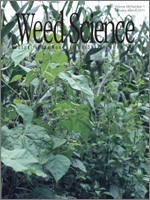 Newswise — With global warming comes increased levels of carbon dioxide in the atmosphere, which benefits at least one species—weeds. Carbon dioxide acts as a fertilizer to invasive exotic grasses, resulting in higher growth rates and larger leaves. These stronger plants are also proving more resistant to the world’s most important herbicide, glyphosate, commercially known as Roundup.

A study published in the current issue of the journal Weed Science reports the effects of elevated carbon dioxide levels on four species of grass. The research also gauged the tolerance of these plants to the most widely used herbicide for weed control, glyphosate.

The four species tested are all invasive exotic plants in Australia that previously have been chemically controlled with glyphosate. The plants were grown in glasshouse experiments at ambient and elevated carbon dioxide levels.

Mature plants were then sprayed with the recommended amount of glyphosate. When treated with the herbicide, three of the four species showed a significantly higher survival rate under the elevated carbon dioxide level compared with ambient levels.

The herbicide works by inhibiting an enzyme the plant needs for biosynthesis. However, when the plant is exposed to higher levels of carbon dioxide, it increases its growth and biomass production in a way that heightens its tolerance to glyphosate. The plant is experiencing reduced stomatal conductance and creating greater total leaf area.

Atmospheric carbon dioxide has increased greatly in the past two decades because of the burning of fossil fuels and changes in land use. Preindustrial carbon dioxide levels were rated at 280 parts per million (ppm), while 2005 levels reached 379 ppm. By the year 2100, it is predicted that carbon dioxide will reach 700 ppm; this level was represented in the elevated growth test.

With carbon dioxide helping to create a better weed, use of herbicides may be increased to counter the effect. More weeds and larger amounts of herbicides could have significant economic and environmental impacts.