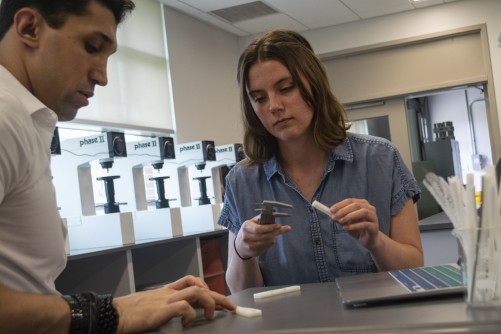 Fariborz Tavangarian, associate professor of mechanical engineering, and Olivia Lowe, mechanical engineering student, perform a dog-bone sample test (a materials science test involving samples shaped like dog bones, not actually made of bone) to use the data for simulation in the Materials Lab Room 119 in North Educational Activities Building at Penn State Harrisburg.

Newswise — UNIVERSITY PARK, Pa. - The Faculty Early Career Development (CAREER) Program is the National Science Foundation’s (NSF) most prestigious award for early-career faculty, providing valuable financial support for a specific research project and recognizing that faculty’s potential as a leader in scientific research and a role model in education.

Fariborz Tavangarian, associate professor of mechanical engineering at Penn State Harrisburg, is one such example, having landed a CAREER award this year for “Achieving Resilience in Brittle Materials Through Bio-inspired Nested Cylindrical Structures.” Biomaterials is Tavangarian’s area of expertise.

“My background was in materials science and engineering, but when I joined the mechanical engineering department at LSU for my Ph.D, I had to take several mechanical engineering courses.” Tavangarian said. “My research is interdisciplinary, and my major focus is on biomaterials and nanotechnology. Since I started my faculty career at Penn State Harrisburg, I started researching mechanics and nature-inspired structures.”

The nature-inspired structure that Tavangarian focuses on is found on the bottom of the ocean: most sea sponges have a unique microstructure that features sharp-edged structural components known as spicules. These components offer a conundrum, in that while they are composed of a brittle ceramic, silica, they are also tough and flexible.

“These types of sponges are composed of some strands, and when you look at these strands under a microscope, you see they are nested cylindrical structures,” Tavangarian said. “Layer upon layer, it's kind of one cylinder inside another cylinder and they are connected through a type of organic material.”

This structure is close to what is found in human bones, so Tavangarian’s research findings that is being funded by the CAREER award will explore the potential of such a biological-inspired structure for human bone tissue engineering, among other applications.

"Our first application for this research is for bone implant and bone tissue engineering ” Tavangarian said. “And next, it can also be used for some structural application because those type of cylindrical structures can provide better strength compared to solid rod. So, if you build something with a spicule-inspired structure from brittle materials, it can have a higher strength than one built with solid rods, and it can even have potentially a self-healing ability through mixing compounds embedded in between the cylinders.”

To get to the point where Tavangarian’s skills and expertise resulted in his landing the prestigious CAREER award that will result in research that would someday reap plenty of societal benefits, Penn State’s support of its researchers was key. An early boost for his research came in the form of support from the Commonwealth Campuses Research Collaboration Development Program (CCRCDP).

A key part of the CCRCDP’s mission is to encourage and support research projects such as Tavangarian’s that are collaborations among faculty at Penn State Commonwealth Campuses and at shared core facilities at University Park interdisciplinary institutes and the College of Medicine. For Tavangarian, the collaboration that enabled him to receive the CAREER award was enabled by the CCRCDP.

"For any types of grants you'd like to receive, you would need to prove the feasibility of the project,” Tavangarian said. “And for that you need to run some tests to prove that the concept or theory you have in mind has some merits.”

So, the CCRCDP, along with a few other seed grants, helped to enable Tavangarian to travel to University Park to visit the Materials Characterization Lab (MCL), part of the Materials Research Institute (MRI), to run some tests.

“The CCRCDP grant was one of the grants that helped me build the foundation of the CAREER award proposal,” Tavangarian said. “It allowed me to run some tests at the MCL, gathering some preliminary data and subsequently enabled me to provide a proof of concept to the NSF reviewers for the CAREER award.”

Tavangarian worked with MCL staff to carry out work that included polishing and etching samples from sponges to prepare them for characterization, and deal with any issue that may come up, such as damage to the sample during the process.

"Basically, we removed the organic material from the structure so we could just see the inorganic structure of the spicules,” Tavangarian said.

“I trained Fariborz on how to use the TEMs and also operated the TEM for him to get some more recent data for his NSF proposal,” said Jennifer Gray, staff scientist, TEM sample prep with MCL. “In addition, I wrote a paragraph for him in that proposal on how the special equipment we have in our TEM facility could be used for beam-sensitive samples to reduce the damage.”

Gray noted that helping faculty at a branch campus was a significant part of hers and the MCL’s role as part of the Penn State research community.

“I help researchers at our own branch campuses, as well as researchers at other smaller universities who do not have easy access to TEM,” Gray said. “It’s a great way to enable collaboration and advance research for everyone.”

Armed with funding from the CAREER award, Tavangarian’s research will move forward. He expects to continue working with the centralized resources at MRI and the MCL that will enhance his skills and expertise with the right tools necessary for breakthroughs.

"A CAREER award is a five-year project, so in that time I will need to use the MRI and the MCL to run all of the necessary tests and move the project forward,” Tavangarian said. “I think I am very fortunate to have access to MCL because it is one of the best facilities of its kind in the nation. Thanks to them, there are no instruments that I need that I do not have access to.”