They Met for First Time at Loyola Medicine 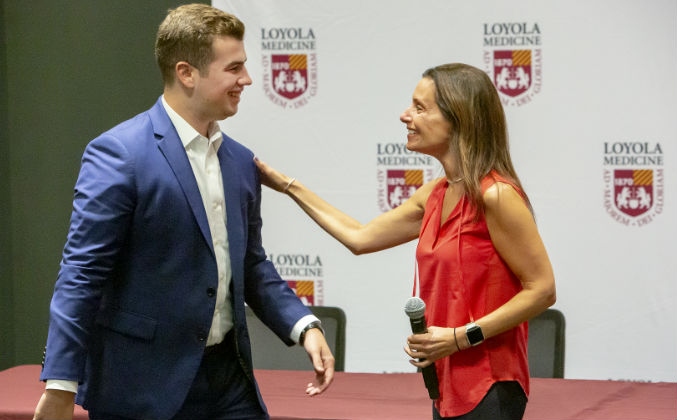 Newswise — On the day he was born, Patrick Davey saved a woman's life.

His parents donated his umbilical cord blood, which was frozen and later was used in a life-saving stem cell transplant that saved the life of Loyola Medicine cancer patient Holly Becker. Twenty five years later, Mr. Davey met Ms. Becker, 45, in a rare meeting of a patient and their cord blood donor.

The meeting occurred during a press conference at Loyola Medicine near Chicago.

Ordinarily, the identity of cord blood donors such as Mr. Davey is kept strictly confidential. But Mr. Davey and Ms. Becker were able to connect by happenstance via a popular consumer DNA test.

"Ms. Becker is alive today because of Mr. Davey's cord blood donation," said Loyola Medicine oncologist Patrick Stiff, MD, who treated Ms. Becker. "Usually you receive a gift on your birthday. But on his actual birth day, Mr. Davey gave a total stranger a gift that would save her life." Dr. Stiff is Loyola's director of hematology/oncology.

Mr. Davey is pleased his mother elected to donate his cord blood. "She has always been grateful for her good fortune in life and good health, so this was a very natural thing to do," he said.   "And I feel pretty privileged to have played a small role in saving a woman's life."

In the fall of 1997, Ms. Becker's future appeared bright. She had just graduated from college, moved out of her parents' home and taken a job in sales and marketing. "I was having fun with friends and family, like any 24-year-old," she said.

Then things went terribly wrong. Ms. Becker began running fevers of 105.4 degrees, couldn't eat and felt extremely weak. Her doctors first said she had the flu, then thought mononucleosis. Soon she couldn't get out of bed. She couldn't work, and had to move back in with her parents.

By Christmas, she was diagnosed with Stage 4 non-Hodgkin lymphoma. The cancer had spread to her spleen, liver and bone marrow. After six months of unsuccessful chemotherapy, she was referred to Loyola for advanced treatment by Dr. Stiff.

In stem cell transplants for cancer patients, the stem cells typically come from a donor's bone marrow. Ms. Becker's brother and sister offered to donate, but neither matched. Nor were there any matches in the National Marrow Donor Program, which has millions of registered donors.

So Dr. Stiff looked to an alternative source of stem cells – donated cord blood (the blood in the umbilical cord and placenta after a baby is born).

The day Patrick Davey was born, his parents altruistically donated his cord blood to a blood bank. About five years later, he came up as a match for Ms. Becker. His cord blood stem cells were thawed and infused into Ms. Becker, where they developed into replacement white blood cells. Ms. Becker now shared Mr. Davey's DNA.

Ms. Becker was cured and today works for a medical nonprofit organization, managing global partnerships and international programs. Mr. Davey grew up, went to college and became a commercial real estate agent. If it weren't for the consumer DNA test, they never would have known of their genetic connection. But as it turns out, Ms. Becker and Mr. Davey's mother, Dania Davey, both had submitted cheek swabs to the DNA test company. Ms. Becker was curious about her ancestry and Ms. Davey, who is adopted, hoped to connect with her biological family. They both consented to being connected with any living relatives.

Surprisingly to both of them, the DNA test company reported that they appeared to be a likely mother-daughter match. They knew this was impossible. But Ms. Becker had a theory to explain the baffling finding. What if they appeared to be related because of the cord blood transplant she had received?

They communicated in emails, running through the possibilities. Ms. Becker asked Ms. Davey: Did you ever donate your baby's cord blood? Yes, Ms. Davey replied. The timing also seemed to fit, as well as the region of the country where the donation was made. So it appeared Ms. Becker's theory could be correct. They subsequently talked on the phone and found a true connection, but have yet to meet in person.

With everyone's consent, Dr. Stiff arranged for a laboratory test to confirm whether there was indeed a match between Mr. Davey and Ms. Becker. Mr. Davey submitted a cheek swab, and it was compared with a sample of the cord blood that Loyola still had on file from Ms. Becker's transplant. The DNA in the cord blood and the DNA in Mr. Davey's cheek swab were a perfect match. That explained why the DNA test made it appear as though Ms. Davey was Ms. Becker's mother.

Ms. Becker is looking forward to meeting her donor and his mother. "I don't have words to express my thanks to them," she said. "I owe my life to the Davey family."

Dr. Stiff said it's possible that other cord blood donors could be united with their donors in a similar fashion.