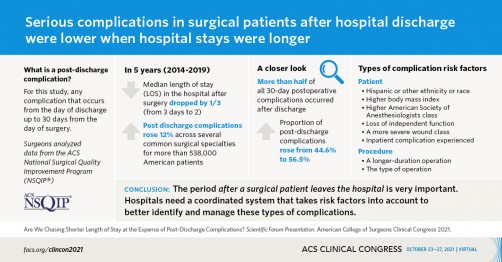 Are We Chasing Shorter Length of Stay At the Expense of Post-Discharge Complications?

Newswise — CHICAGO: New study results suggest the national trend toward decreasing length of hospitalization after surgical procedures may come at the expense of an increasing proportion of complications occurring after patients leave the hospital. Findings from one of the few studies to explore the relationship between length of stay (LOS) and post-discharge complications for surgical patients were presented at the American College of Surgeons (ACS) virtual Clinical Congress 2021.

Hospitals have shortened inpatients’ hospital stays over the past two decades amid factors including an emphasis on outpatient treatment*, bed shortages, cost-cutting measures, and  payers’ requirements. The new study found the median, or middle, LOS after an operation dropped by one-third, from three days in 2014 to two days in 2019.

Although the researchers discovered that the overall rate of postoperative complications declined 1 percent over the five-year study, they found a 12 percent increase in post-discharge complications across several common surgical specialities for more than 538,000 American patients.

Multiple serious complications, including infections and heart problems, had significantly higher rates of occurrence after discharge in 2019, when the average hospital stay was shorter versus 2014, said study co-investigator Ruojia Debbie Li, MD, MS. Dr. Li is a research fellow at Northwestern University Feinberg School of Medicine, Chicago, where the study took place.

“There is a black hole that needs to be addressed between the time the patient gets discharged from the hospital to their first postoperative visit,” Dr. Li said. “Currently we are using a wait-and-see model where, as health care providers, we are waiting for surgical patients to approach us with any concerning signs and symptoms.”

Patients may not recognize complications

A shortcoming that emerges from this approach is that patients and their family caregivers often do not recognize early symptoms of complications, and then their problems may worsen, the study’s principal investigator, Ryan P. Merkow, MD, MS, FACS, assistant professor of surgery at Northwestern Medicine, said.

“I’ve found that many patients and their families are unprepared for the transition from hospital to home and for the task of self-care,” Dr. Merkow said. “The surgical team may not find out about a complication until the patient goes to the emergency room or comes for a clinic visit. If we had known earlier, we could have intervened and decreased the severity of the complication or even possibly have prevented it.”

Dr. Merkow said researchers typically count the rate of total complications within the first month after surgical procedures. This number combines complications occurring in the hospital and after discharge. Therefore, scant evidence exists on what effect a shorter hospital stay has on post-discharge complications, he said.

Post-discharge complications are on the rise

The research team studied the association between LOS and post-discharge complications using the ACS National Surgical Quality Improvement Program (NSQIP®) database. NSQIP is the leading nationally validated, risk-adjusted, outcomes-based program to measure and improve the quality of surgical care in hospitals and is aimed at reducing preventable postoperative complications.

Specifically, the researchers evaluated 2014 to 2019 data for patients who underwent any of 11 surgical procedures of the colon and rectum; esophagus; hepatopancreatobiliary system involving the liver, pancreas, gallbladder and bile ducts; or gynecologic or urologic systems.

Complications with significantly higher rates over time, according to Dr. Li, included surgical site infections and other infections such as pneumonia, urinary tract infection, or bloodstream infections known as sepsis. Other complications that increased as the LOS decreased were heart attack, cardiac arrest, or stroke and a serious blood clot called venous thromboembolism. Many of these complications are potentially preventable; for example, early recognition and management of a superficial wound infection could prevent consequences such as the surgical wound opening and/or sepsis.

“It is critical to not ignore this important period after the patient leaves the hospital,” Dr. Li said.

To lower the post-discharge complication rate, each hospital must have a coordinated system to better identify and manage these complications, Dr. Merkow stated. He recommended such a system include the following components:

The authors report no relevant disclosures. This work received funding from the Agency for Healthcare Research and Quality and the American Cancer Society (Dr. Merkow) and from a National Institutes of Health training grant (Dr. Li).

About the American College of Surgeons
The American College of Surgeons is a scientific and educational organization of surgeons that was founded in 1913 to raise the standards of surgical practice and improve the quality of care for all surgical patients. The College is dedicated to the ethical and competent practice of surgery. Its achievements have significantly influenced the course of scientific surgery in America and have established it as an important advocate for all surgical patients. The College has more than 84,000 members and is the largest organization of surgeons in the world. For more information, visit www.facs.org.