By using small networks of Rössler systems, a locomotion controller enables a brain-machine interface for a six-legged antlike robot. 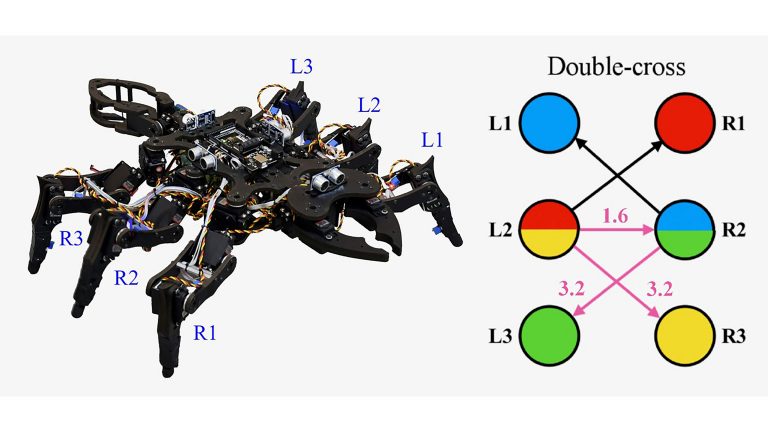 View of the experimental robot and coupling schemes for its gaits.

Newswise — WASHINGTON, December 15, 2020 -- Researchers in Japan and Italy are embracing chaos and nonlinear physics to create insectlike gaits for tiny robots -- complete with a locomotion controller to provide a brain-machine interface.

Biology and physics are permeated by universal phenomena fundamentally grounded in nonlinear physics, and it inspired the researchers’ work.

In the journal Chaos, from AIP Publishing, the group describes using the Rössler system, a system of three nonlinear differential equations, as a building block for central pattern generators (CPGs) to control the gait of a robotic insect.

“The universal nature of underlying phenomena allowed us to demonstrate that locomotion can be achieved via elementary combinations of Rössler systems, which represent a cornerstone in the history of chaotic systems,” said Ludovico Minati, of Tokyo Institute of Technology and the University of Trento.

“These networks, CPGs, are the basis of legged locomotion everywhere within nature,” he said.

The researchers started with a minimalistic network in which each instance is associated with one leg. Changing the gait or creating a new one can be accomplished by simply making small changes to the coupling and associated delays.

In other words, irregularity can be added by making individual systems or the entire network more chaotic. For nonlinear systems, a change of output is not proportional to a change of input.

This work shows that the Rössler system, beyond its many interesting and intricate properties, “can also be successfully used as a substrate to construct a bioinspired locomotion controller for an insect robot,” Minati said.

Their controller is built with an electroencephalogram to enable a brain-computer interface.

“Neuroelectrical activity from a person is recorded and nonlinear concepts of phase synchronization are used to extract a pattern,” said Minati. “This pattern is then used as a basis to influence the dynamics of the Rössler systems, which generate the walking pattern for the insect robot.”

The researchers tap into the fundamental ideas of nonlinear dynamics twice.

“First, we use them to decode biological activity, then in the opposite direction to generate bioinspired activity,” he said.

The key implication of this work is that it “demonstrates the generality of nonlinear dynamic concepts such as the ability of the Rössler system, which is often studied in an abstract scenario,” Minati said, “but is used here as a basis to generate biologically plausible patterns.”