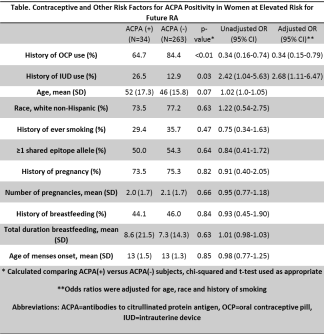 Table: Contraceptive and Other Risk Factors for ACPA Positivity in Women at Elevated Risk for Future RA

Newswise — BOSTON — Women using intrauterine devices (IUDs) may be at increased risk for producing autoantibodies related to the risk of developing rheumatoid arthritis (RA), according to new research findings presented this week at the American College of Rheumatology Annual Meeting in Boston.

Rheumatoid arthritis is a chronic disease that causes pain, stiffness, swelling and limitation in the motion and function of multiple joints. Though joints are the principal body parts affected by RA, inflammation can develop in other organs as well. An estimated 1.3 million Americans have RA, and the disease typically affects women three times as often as men.

In a study from the Studies of the Etiology of RA (SERA) project, researchers in Colorado, Nebraska, California, New York and Washington looked at the potential effects of different contraceptive use on blood levels of RA-related autoantibodies to citrullinated protein antigens (ACPA). In this study, ACPA testing included the anti-cyclic citrullinated peptide (anti-CCP) test. Elevated levels of anti-CCP can be found in the blood several years before joint symptoms develop in RA. This period of RA development is often called the preclinical period of RA.

Having elevated anti-CCP levels strongly predicts future development of joint disease and a diagnosis of RA, and recent data suggest that ACPA may be directly pathogenic. Therefore, it is important to understand factors that influence the development of these RA-related autoantibodies, even in the absence of inflammatory arthritis.

Prior research suggests that hormonal factors may make women more susceptible to RA development than men. Because RA is more common in women, the researchers wanted to look at factors specific to women, such as contraception and pregnancy, to identify if these factors influence the development of RA-related autoantibodies in women. The researchers hoped that if they identified certain female factors associated with the development of RA-related autoantibodies, it may improve the overall understanding of why women get RA more often than men. Also, if certain factors are found to influence the development of autoimmunity in RA, these may be important factors to target in prevention of disease in women at high risk for RA in the future, such as a first-degree relative of someone with diagnosed RA.

From the SERA project, the researchers studied 976 women who had a first-degree relative with RA and who are therefore at increased risk for future RA based on family history of RA. These women had a baseline study visit where they had blood testing for ACPA using a clinically available ACPA test called anti-CCP. These women also filled out a questionnaire to obtain information about their prior and current use of contraception and pregnancy related history. All the women studied had no clinical evidence of inflammatory arthritis at the time of autoantibody testing, and therefore did not have a diagnosis of RA.

“We think these findings are very exciting and will lead to future studies that improve our understanding of RA development in women,” said Kristen Demourelle, MD of the University of Colorado Denver and a lead author of the study. “However, it is important to remember that this study was performed in a group of women already known to be at increased risk for RA. These findings may not apply to the general population, and additional studies of women over a longer period of time are needed to confirm and extend these findings. Furthermore, not all women who were anti-CCP positive had used IUDs, so there are likely other factors related to the generation of these autoantibodies, and this will also need to be explored.”

The study’s authors concluded there is an association between current IUD use and a higher prevalence of anti-CCP positivity in the blood. While this study is not able to address whether IUDs increase the risk of actually developing RA, they do suggest that IUDs may be associated with the development of RA-related autoantibodies in some women who are at increased risk for RA. While the mechanisms that may link contraceptive factors to ACPA generation are unknown, IUDs can generate inflammatory responses in the uterus. Therefore, the association of IUD use and ACPA may be related to IUD-induced inflammation in women at risk for RA. Further study is needed to determine which mechanisms may play a role in OCP use protecting against RA-related autoimmunity.

The American College of Rheumatology is an international professional medical society that represents more than 9,500 rheumatologists and rheumatology health professionals around the world. Its mission is to Advance Rheumatology! The ACR/ARHP Annual Meeting is the premier meeting in rheumatology. For more information about the meeting, visit http://www.acrannualmeeting.org/ or join the conversation on Twitter by using the official #ACR14 hashtag.  Paper Number: 2921

Background/Purpose: The preclinical period of rheumatoid arthritis (RA) development is characterized by elevations of serum RA-related autoantibodies (Abs) including Abs to citrullinated protein antigens (ACPA) and rheumatoid factor (RF). Serum ACPAs are highly predictive of future inflammatory arthritis (IA) classifiable as RA, and recent data suggesting that ACPAs are directly pathogenic in joint disease highlight the need to understand the etiology of ACPA development. In addition, it remains unknown why RA disproportionately impacts women compared to men, and data suggest hormonal factors may influence the risk of developing RA. Importantly, prior data from our group identified that oral contraceptive pill (OCP) use was associated with a decreased risk for serum RF positivity in the absence of IA (Bhatia 2007). Therefore, we hypothesize that contraceptive factors will be associated with serum ACPA positivity among arthritis-free women at increased risk for RA.

Methods: In the Studies of the Etiology of RA (SERA) project, 1243 first degree relatives (FDR) of probands with RA are enrolled who are women. Of these FDRs, we studied women who at their baseline visit had serum ELISA testing for ACPA using anti-CCP3.1 (IgG/IgA, INOVA) and a detailed prior contraceptive and pregnancy history obtained using a standardized questionnaire (N=336). To avoid familial correlation, we also randomly selected only one subject per family; therefore, our final analyses included 297 FDRs. All subjects were without clinical IA at the time of serum testing. In cross-section, associations of ACPA and subject factors were analyzed using chi-squared and logistic regression.

Results: In multivariate analyses, prior use of OCPs was associated with a decreased risk of serum ACPA positivity (OR=0.34; 95% CI 0.15-0.79; adjusted for age, race and smoking). In addition, there was an increased risk of ACPA positivity in women who had a history of intrauterine device (IUD) use (OR=2.68; 95% CI 1.11-6.47; adjusted for age, race and smoking). ACPA(+) FDRs were slightly older than ACPA(-) FDRs, but were similar in race, smoking and shared epitope status (Table). No significant association was seen between ACPA positivity and pregnancy or breastfeeding.

Conclusion: Prior OCP use was associated with a decreased risk of ACPA positivity in these FDRs, and these results are in line with our prior findings of OCP use associated with a decreased risk of RF positivity. Of interest was the association of an increased risk of ACPA positivity with IUD use. While the mechanisms that link contraceptive factors to ACPA generation are unknown, unlike OCPs, IUDs have been shown to generate endometrial inflammatory responses. Therefore, the association of IUD use and ACPA suggest that IUD-induced endometrial inflammation may be a potential mucosal trigger of RA-related Abs. Mechanisms by which OCPs could protect and IUDs could increase risk for RA-related autoimmunity need further study.