Victor Nizet, MD, describes the research indicating that statins can lower the risk of severe bacterial infections, such as sepsis and pneumonia. 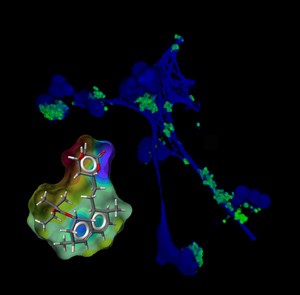 Newswise — Widely prescribed for their cholesterol-lowering properties, recent clinical research indicates that statins can produce a second, significant health benefit: lowering the risk of severe bacterial infections such as pneumonia and sepsis. A new explanation for these findings has been discovered by researchers at the University of California, San Diego School of Medicine and Skaggs School of Pharmacy & Pharmaceutical Sciences, who describe for the first time how statins activate the bacterial killing properties of white blood cells.

The research is published in the November 18, 2010 issue of Cell Host & Microbe.

Surprisingly, the statin-induced improvement in bacterial killing did not correspond to increased uptake of bacteria by these specialized white blood cells. Rather, the researchers found that statins stimulated the phagocytes to release "extracellular traps" – specialized webs of DNA-based filaments embedded with anti-microbial peptides and enzymes capable of ensnaring and killing bacteria before they spread in the body.

The findings have broad ramifications, said Glass, given the popularity of statins for controlling high cholesterol levels. Statins are the world’s most-prescribed class of medication. An estimated 30 million Americans alone take the drug under commercial names like Lipitor, Zocor and Crestor. “Clinical research indicates that perhaps 100 million Americans have elevated cholesterol levels that could benefit from statin therapy,” said Glass. “Thus any statin-associated changes to immune system function are certain to impact millions of people.” Prior research had described various anti-inflammatory properties of statins, suggesting that these effects could contribute to a reduction in disease severity during severe infections. Nizet and Glass explored a different hypothesis: That statins might actually aid the body in clearing itself of infectious microbes. The researchers focused on Staphyloccocus aureus, more commonly called “staph,” a frequently antibiotic-resistant human pathogen responsible for everything from minor skin infections to life-threatening meningitis and sepsis. Mice treated with statins were more resistant to staph infections, and phagocytes isolated from these mice were more effective at killing staph bacteria. Simple exposure of freshly isolated human white blood cells to statins in a test tube markedly increased their ability to kill staph and other important disease causing bacteria. In each case, the increased killing correlated with greater release of the DNA-based extracellular traps by the phagocytes.

The UCSD findings demonstrate that statins have important pharmacological effects beyond inhibiting cholesterol production. “We found these drugs fundamentally alter how white blood cells behave upon encountering bacteria,” Nizet said. “In our studies with staph bacteria, the net effect of statin treatment was to improve bacterial killing and extracellular trap formation. These same changes might not be so consequential for defense against less virulent bacteria that are easily susceptible to uptake and killing within phagocytes.”

The research also sheds important new light on the clinical phenomenon of reduced infection severity in patients receiving statins, the scientists said. It indicates that levels of cholesterol or related lipid molecules can be sensed by white blood cells and used as signals to control their inflammatory and antibacterial activities. Nizet and Glass recommend that future research explore whether the potential of cholesterol-lowering agents combined with antibiotics can be harnessed to optimize the treatment of certain difficult infectious disease conditions.

Download a video of Nizet describing the research at: http://vmg.ucsd.edu/download/vmg_pub/Communications%20Transfer/