22-May-2017 10:05 AM EDT, by University of Virginia Darden School of Business
favorite_border 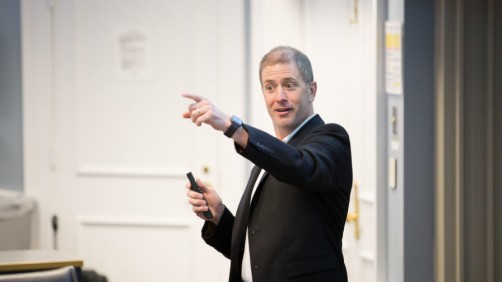 Newswise — “Voice” will be the third wave of the age of digital disruption, while cold calling as a go-to-market sales strategy is dead.

Those insights courtesy of WillowTree Inc. CEO Tobias Dengel came during the seventh annual Theory + Practice in Marketing conference. The conference, hosted by the University of Virginia Darden School of Business and co-chaired by Darden Professors Tom Steenburgh, Raj Venkatesan and Kimberly Whitler, convened academics and practitioners in the field of marketing for three days in May in order to more closely connect academic marketing research with the practice of marketing and substantive business problems.

It was highlighted by more than a dozen presentations of academic research as well as keynotes and panels featuring executives from CarMax, Capital One, Coca-Cola, Compare.com, Google, WillowTree and more.

“Every company is being disrupted by digital” in today’s business environment, Dengel said during his address. The key is understanding what to do next.

To that end, Dengel said many business pundits have observed somewhat of a pause in digital disruption, following initial waves from the emergence of the Internet and then mobile technology. However, Dengel said app developer WillowTree sees a third wave coming.

Web and mobile technologies rely on keyboards and keypads today. The average person only types at 40 or 50 words per minute, but speaks 130 to 150 words per minute and can read at twice the rate they speak. The human mind can interpret the equivalent of 5,000 words per minute through an effective graphic, Dengel said.

Dengel foresees a “multimodal” world where consumers interact with devices all around us by voice and get visual responses in the form of text and graphic information. While Amazon’s Echo, Google Home and Apple’s recent iPhone upgrade providing automatic transcriptions of voice mails are early entries in the market, Dengel said there are many barriers to cross before tech companies can offer the quality user experience necessary to unleash the voice revolution.

The ability to offer consumers the most convenient, frictionless purchasing experience continues to separate winners from losers in the digital marketing space, Dengel said.

Offering the case of Domino’s Pizza, Dengel said it is no coincidence that Domino’s stock has outperformed almost the entire stock market over the past five years. The company’s stock has more than quadrupled in that period, in which Dengel said Domino’s “invested heavily in being a convenience company instead of a pizza company.”

Today, a consumer can order a Domino’s pizza online not just on the company’s website, but on platforms consumers commonly use like Facebook Messenger. Domino’s uses location services to choose the correct store to deliver the pizza, and consumers can track the status of their order online.

Lastly, Dengel turned to go-to-market sales strategies for emerging companies like WillowTree. His most emphatic insight: “Cold calling is dead.”

While sales cold calls were an effective tool for business-to-business startups for 30 years, Dengel said no one picks up a phone anymore. WillowTree’s challenge was to get prospective customers to contact them.

They accomplished that feat through digital marketing, specifically four tactics:

An auto insurance shopping service, Compare.com is essentially “Kayak for auto insurance,” according to President and CEO Andrew Rose (MBA ’03). However, as it seeks to become “the Amazon of intangible services,” the company is increasingly offering comparison shopping far beyond the auto insurance sector.

Compare’s commitment to using a data-driven approach to iterate toward successful digital marketing has impacted decisions as fundamental as the company’s name.

Compare is a sister company of Confused.com. Both are owned by financial services giant Admiral Group and Confused.com is a market-leading auto insurance comparison service in the United Kingdom. In its early startup days, Rose said the company considered also using Confused.com in the United States.

“The Brits have a very different sense of humor. Confused.com worked brilliantly,” Rose said. But when they tested the name in the U.S., Confused.com placed last out of 40 options. “American consumers hated it. … It doesn’t work for American egos.”

After launching in 2013 and investing heavily in digital marketing to get early traffic to the company’s website, Compare began to aggressively iterate its advertising campaigns.

They tried computer generated talking apples — as in “apples to apples comparison,” Rose said — but data proved those ads as failures. Rose was featured for a time, and he joked that those ads performed well with older consumers, but not the broader market. Ultimately, Compare settled on a campaign featuring futuristic settings, a young male protagonist and humor because the data showed those ads performing vastly better than their existing baseline.

Today, Rose said Compare’s data-driven digital advertising approach is so granular and responsive that executives literally “switched off” a campaign targeting a subset of consumers in South Carolina during a recent daily meeting because the latest data showed it wasn’t performing to expectations.