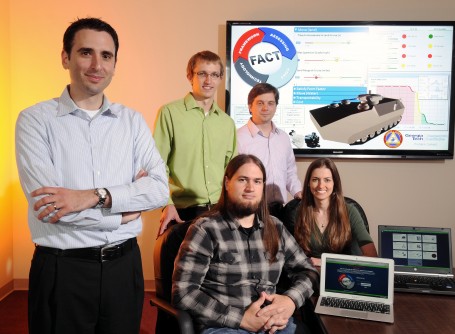 A team from the Georgia Tech Research Institute (GTRI) has produced an advanced web-based tool that lets physically separated participants collaborate on model-based systems engineering projects. Known as the Framework for Assessing Cost and Technology (FACT), the program utilizes open-source software components to allow users to visualize a system's potential expense alongside its performance, reliability and other factors.

The research is sponsored by the U.S. Marine Corps Systems Command (MCSC). The work was most recently reported in March in the Proceedings of the 11th Conference on Systems Engineering Research.

The FACT tool enables users to pull all aspects of a project into a single modeling and simulation process, explained Tommer Ender, a GTRI senior research engineer who co-leads the effort.

"The FACT framework lets multiple users work together online to create entire systems, including complex technology systems," Ender said. "All they need is access to a web browser."

• Capacity to weigh cost along with performance factors;• Adaptability to a wide range of systems engineering problems;• Ability to track the entire collaborative process;• Advanced security and configurability features;• Collaboration among any systems engineering platforms with web access. FACT is currently in use at the GTRI field office in Quantico, Va., located on the Quantico Marine Corps Base. There, senior research engineers Jim Bertoglio and Ron Smith are working with Marine Corps personnel to maximize the software's effectiveness.

Inside the GTRI facility, a dedicated conference room with six large high definition screens provides highly reconfigurable work areas. The screens function individually or together, while notes handwritten on a linked screen can instantly become electronic text that supports the online collaboration.

Modeling and simulation software, Ender explained, has traditionally been used to address performance issues. For instance, M&S tools allow researchers to investigate the capabilities of air or ground vehicles, or radar systems' effectiveness against hostile action.

"These tools do an excellent job of answering the 'how fast, how well' questions, but we rarely see them working in either collaborative or cost-aware environments," he said.

With FACT, online users can take advantage of a technique called trade-space analysis, which allows them to juggle performance, cost and other factors, said Daniel Browne, a research engineer who leads the project for GTRI. For example, users examining vehicle convoy logistics could investigate the complex interrelationship of vehicles, personnel, supplies and cost to pinpoint optimal combinations.

"We can select parameters for each component down to the desired level of detail, and then experiment with trade-offs at the attribute level," Browne said. "Suppose I use FACT to adjust the number of convoy personnel per HUMVEE to increase fuel efficiency. I can then turn around and look at how that change affects the number of convoys I can field, and what the ultimate cost savings is."

FACT's collaborative capabilities include security and usability functions that are highly configurable, he said. If, for instance, a given user is responsible only for budgetary considerations, administrators could limit that person to just the model's cost portions.

Users can create entire technical models outside the FACT framework, and then introduce those models into the collaborative arena for team-wide consideration. In all cases, administrators can go back and trace each part of the work, including where it came from and what happened after it came into the system.

Ender stressed the point that FACT's modeling capabilities can be applied to many different types of projects. The GTRI development team has already used it to address systems engineering questions relating to ships, satellites and ground vehicles.

"In the past, it's been very challenging to re-use modeling and simulation tools," he said. "You could build a big beautiful tool for a customer, but when the customer came in with a different problem, you had to start again from scratch."

A major factor in FACT's portability is that its building blocks are both flexible and familiar. They're based on open-source software standards and recognized approaches to systems engineering processes.

The FACT tool itself will likely be limited to military use, Browne said. But software frameworks similar to FACT offer promise for future applications that could support both academic and commercial systems engineering needs.

"The ultimate goal is to have a reusable model-based systems engineering tool in hand, available for a wide range of customer needs," he said. "Having such a tool lets us spend our time and effort improving the quality of the domain-specific information that goes into the model itself, rather than having to reinvent the modeling tool we're using."