6-Nov-2017 8:05 AM EST, by Uniformed Services University of the Health Sciences (USU)
favorite_border 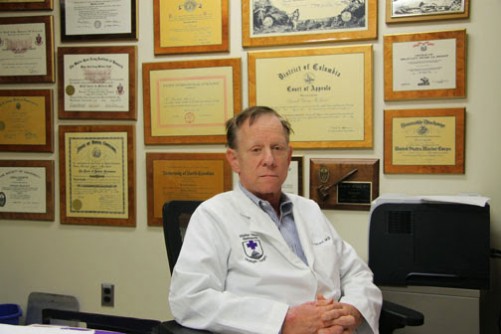 A fellowship has been established in honor of retired Army Col. (Dr.) David McLeod, a pioneer in prostate disease research.

Newswise — Bethesda, Md— A new translational research fellowship has been established to continue the pioneering work of retired Army Col. (Dr.) David G. McLeod, who devoted nearly 50 years to prostate cancer research and treatment as a military urologist. He retired in 2016 as founding director of the Center for Prostate Disease Research (CPDR) at the Uniformed Services University of the Health Sciences (USU).

The COL (Ret.) David G. McLeod Prostate Cancer Translational Research Fellowship was established through a partnership among USU, The Henry M. Jackson Foundation for the Advancement of Military Medicine, Inc. (HJF), and BERG, a Boston-based biopharma company, which also provided funding for the fellowship.

The award will support an outstanding biomedical researcher to further accelerate the progress of an ongoing cooperative research and development agreement among USU’s CPDR, HJF and BERG. This partnership has been instrumental in groundbreaking discoveries using sera from a racially diverse prostate cancer patient population in the equal-access military health care setting, and BERG’s multi-omics and artificial intelligence platforms. The joint endeavor addresses the major challenge in the management of prostate cancer: a lack of biomarkers for differentiating indolent prostate cancer from aggressive disease, before treatment decisions are made, as well as during and following the course of treatment.

Once selected, the McLeod Fellowship recipient will work to develop precise markers obtained from blood and other biofluids to complement current predictive approaches in the management of patients throughout the continuum of the disease. The markers could help physicians determine which patients with indolent disease should be directed to active surveillance and which patients with disease progression should be directed to appropriate treatment groups.

By blending basic and clinical research, the work of McLeod and his team led to scientific breakthroughs in defining common prostate cancer gene alterations, such as oncogenic activation of the ERG gene, and supported the first validation of the prostate cancer Oncotype Dx prognostic test within the Department of Defense (DoD). The test aids newly-diagnosed patients with early-stage prostate cancer to make the most informed treatment decisions for their disease.

He was the first to obtain the MRI fusion guided biopsy technology within the DoD. The technology allows clinicians to superimpose, or fuse, MRI images reflecting abnormalities onto a set of ultrasound images. The system gives urologists a biopsy pathway to follow so that abnormalities revealed by the MRI images can be targeted. McLeod has co-authored nearly 250 publications, including articles in the New England Journal of Medicine, Journal of the American Medical Association and other leading scientific journals.

McLeod, who retired at the rank of colonel, joined the Army medical department in 1964, after graduating from the University of North Carolina with bachelor’s and Doctor of Medicine degrees. He is a highly decorated soldier with service as a clearing platoon leader and medical company commander of the 1st Brigade, 101st Airborne Division during the Vietnam War. McLeod served as program director in Urology and chief of Urologic Oncology at the former Walter Reed Army Medical Center in Washington, D.C., for many years prior to founding the CPDR. He is a professor of Surgery at USU as well as a clinical professor in the Department of Surgery (Urology) at Georgetown University Medical Center.

The Uniformed Services University of the Health Sciences (USU), founded by an act of Congress in 1972, is the academic heart of the Military Health System. USU students are primarily active-duty uniformed officers in the Army, Navy, Air Force and Public Health Service who receive specialized education in tropical and infectious diseases, TBI and PTSD, disaster response and humanitarian assistance, global health, and acute trauma care. A large percentage of the university’s more than 5,800 physician and 900 advanced practice nursing alumni are supporting operations around the work, offering their leadership and experience. USU’s graduate programs in biomedical sciences and public health are committed to excellence in research and oral biology. The university’s research program covers a wide range of clinical and basic science important to both the military and public health.  For more information, visit www.usuhs.edu.

USU’s Center for Prostate Disease Research/Prostate Cancer Center of Excellence is part of the USU/Walter Reed National Military Medical Center Department of Surgery.  The CPDR is a state-of-the-art translational research program and an integral component of the John P. Murtha Cancer Center, conducting studies on prostate cancer and prostate disease in the Military Healthcare System. Since its inception in 1992, the center has developed a comprehensive prostate cancer database within the Department of Defense, with more than 29,000 prostate subjects enrolled to date. The CPDR is a leading prostate cancer research center credited for groundbreaking discoveries and prostate cancer clinical trials at the Walter Reed National Military Medical Center.