Colorado State University is hosting an intensive laboratory testing campaign for biomass cookstoves this month as part of a $1.5 million study on the air quality, climate, and health effects of cookstove smoke. 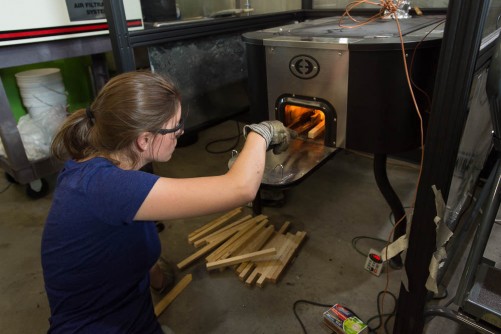 Newswise — Colorado State University is hosting an intensive laboratory testing campaign for biomass cookstoves this month as part of a $1.5 million study on the air quality, climate and health effects of cookstove smoke.

“About half of the world’s population wakes up and starts a campfire in their kitchens to keep their families warm and fed,” said John Volckens, the study’s lead investigator and director of the CSU Center for Energy Development and Health. “Eventually, it all goes up in the sky, and we inhale it too.”

A video about the testing session can be found at http://youtu.be/8C9s3EztdaU.

The event, titled the 2014 Front Range Cookstoves Study, is being conducted in the Advanced Cookstoves Laboratory at CSU’s Powerhouse Energy Campus. Researchers from Carnegie Mellon University, the University of Illinois at Urbana-Champaign, CU-Boulder, the EPA and Uganda are participating in the tests.

It’s an effort to help determine to what extent the stoves used by 3 billion people worldwide for heating, lighting and cooking are contributing to climate change and global air quality. Researchers hope to understand whether atmospheric pollution could be markedly lessened by reducing the use of biomass cookstoves. They also want to gauge how much of a reduction in cookstove use might be needed to cause a meaningful impact on climate change.

The overarching project, titled, “Quantifying the climate, air quality and health benefits of improved cookstoves: An integrated laboratory, field and modeling study,” will also involve field visits to four developing nations where cookstove use is common, and atmospheric modeling based on data collected.

Researchers will travel to Honduras, Kenya, India and China to study stove use. In these and other developing nations, cookstove fuels commonly include wood, garbage, charcoal, corn stalks, rice husks and animal dung, depending on availability and cultural norms, said Christian L’Orange, a research scientist in the CSU Department of Environmental and Radiological Health Sciences.

After the team compiles an unprecedented emissions inventory, Assistant Professor Jeff Pierce of the CSU Department of Atmospheric Science will model how changes in cookstove use would affect the climate. For example, one model will examine what would happen if a large percentage of biomass cookstoves was replaced with clean-burning stoves fueled by natural gas.

Previous studies, including several conducted by CSU in countries like India, Nicaragua and Honduras, have examined the negative health effects of cookstove smoke on a household’s members.

Partners in the current interdisciplinary research project represent the CSU colleges of Engineering and Veterinary Medicine and Biomedical Sciences. Others include the Berkeley Air Monitoring Group, the EPA Office of Research and Development, and Carnegie Mellon University Department of Mechanical Engineering.

Also collaborating is Envirofit International, a CSU spinoff that manufactures clean-burning stoves and began in the university’s Engines and Energy Conversion Laboratory.