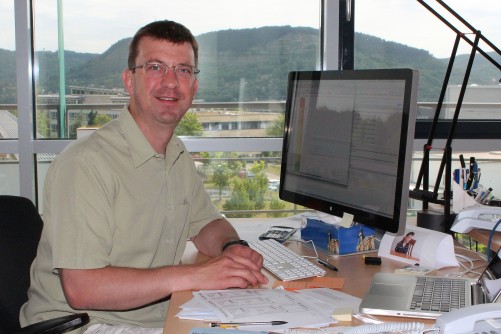 With the help of a Colorado State University research team led by Joe von Fischer, the vehicles also measured where and how much methane is leaking from the miles of underground pipelines that deliver natural gas to customers in those cities.

The CSU team helped develop the routes the Google cars drove and the sophisticated data analysis tools to interpret those methane measures for the project, which is being led by the nonprofit Environmental Defense Fund..

EDF used the data collected from more than 15 million data points to create interactive maps that depict the thousands of leaks beneath the streets of the three cities. (www.edf.org/methanemaps).

“This complex project started with a rather simple question: Can we map and quantify methane leaks in an urban environment?” said von Fischer, associate professor of biology at CSU. “Researchers, including me, have measured methane concentrations in cities before. The challenge has been the ability to translate methane concentration into understandable leak rate estimates. This effort not only makes a significant scientific advancement, it helps raise awareness of how much methane is escaping from pipelines in our cities.”

EDF approached von Fischer, who has long studied methane gas and developed new techniques in which to measure natural and man-made sources, to participate in the project nearly two years ago.

“Previous testing I’d done provided an early prototype for this project with EDF and Google,” he said.

Several years ago, von Fischer and a CSU undergraduate student designed a sensor system, mounted it to a car and drove around Fort Collins to see if they could measure methane leaks in the city.

For the current project, the CSU team also executed some “controlled release” experiments that enabled researchers to understand how the vehicle systems would perceive leaks of different sizes. Based in part on these findings, they wrote computer code to analyze data from the vehicles.

One of the goals of the EDF project is to provide utilities providers with another tool to better detect leaks and prioritize which pipes need to be repaired first.

Utilities regularly monitor systems for leaks, which can pose a safety hazard if they are large enough or close to a building. If enough natural gas accumulates in a small, confined area and something ignites it, it can cause an explosion. (Natural gas is odorized so people will notice a major leak.)

Smaller leaks usually are fixed only when pipelines or infrastructure are replaced. That’s because inspecting miles of pipeline for leaks required a lot of specialized personnel and equipment and was very time-consuming.

And while small leaks aren’t considered a safety hazard, they can have a big impact on the environment. Methane is the primary component in natural gas, and is much more potent than carbon dioxide.

“One leak on its own isn’t bad, but when you have thousands of small leaks, it adds up,” von Fischer said. “Climate scientists largely agree that methane and other super-charged pollutants are intensifying the rate of the Earth’s warming and negatively affecting our climate.”

Von Fischer said the analytical tools he helped developed for EDF and Google’s methane mapping project makes it much easier to find and assess the size of a leak.

He added that the Google Street View cars won’t replace the detailed surveys utilities perform but will complement them.

“We still need those guys on the streets looking for every leak they can find,” he said. “But their results aren’t made public, and so the public can’t see how well its infrastructure compares to other cities. This project makes that data visible.”

The data collected so far already show a wide disparity in the amount of methane leaking in Indianapolis, Boston and Staten Island. Their results show very few leaks in Indianapolis, just one every 150 miles, compared to about one every mile in Boston.

“There’s a big difference,” von Fischer said. “It is clear that the aggressive pipeline replacement program in Indianapolis has made a big difference in the leak frequency.”

This study is one of several EDF has launched since 2012 to better understand where methane is leaking in the nation’s vast natural gas infrastructure. Leaks occur across the natural gas supply chain, from drilling to production, processing to transmission and delivery to consumers. Some of the EDF studies involve industrial partners, many of which are natural gas companies.

In addition to the Google project, CSU is involved in two EDF-sponsored methane projects. CSU researchers are leading efforts to quantify methane emissions from the gathering and processing and transmission and storage portions of the natural gas cycle.