Combined Approach to Global Health Can Save Lives at Lower Cost 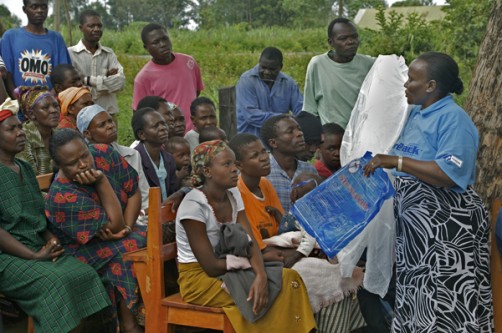 A volunteer in 2008 shows people from the Lurambi District in Western Kenya how to use incecticide-treated bednets to prevent the spread of malaria during the Integrated Prevention Demonstration Campaign sponsored by Vestergaard Frandsen.

Newswise — The great paradox of global health efforts is that regions of the world most plagued by poverty, poor infrastructure and rampant disease are often the most difficult to support. Now, scientists have demonstrated that confronting several diseases at once can make the most of thinly-stretched donor dollars and national health care budgets, to help to save lives.

A new analysis published this week in the open-access journal PLoS ONE (Feb. 3, 2012) focused on a combined public health campaign in Western Province, Kenya led by the Swiss-based company Vestergaard Frandsen, the Kenyan Ministry of Health and the U.S. Centers for Disease Control and Prevention (CDC). The analysis looked at the cost effectiveness of simultaneously confronting the problems of HIV/AIDS, malaria, and diarrhea caused by waterborne pathogens.

The researchers used the results of the campaign to build an analysis of the impact such efforts could have if carried out more broadly. The analysis found that for every 1,000 people reached through such campaigns, some $16,015 in health care costs would be avoided and more than 16 lives would be saved. As a result, local populations would gain hundreds of years of healthy life. The cost would be $32 per person, but averted health care costs would be greater, leading to the net savings.

“That's a very attractive deal,” said James G. Kahn, MD, MPH, a professor of health policy, epidemiology and global health at the University of California, San Francisco (UCSF), who is the senior author on the PLoS ONE study and led the economic aspect of the research. “This kind of a campaign is an excellent use of global health dollars."Bed Nets, Water Filters, Condoms, and Education

Health care workers distributed “CarePacks” at 37 locations in Kenya over seven days in 2008. These packs contained insecticide-treated bed nets to reduce the spread of malaria, water filters for preventing diarrheal diseases, and condoms.

Some 47,000 people ultimately received the packs, which also contained educational information as incentive for local residents to participate in a voluntary HIV testing and counseling program.

By combining efforts to reduce the burdens of malaria, diarrhea, and HIV/AIDS, the program efficiently stretched the impact of its funds, Kahn said, which is important in areas where per capita health expenditures may amount to little more than a few dollars a year. Combining these public health efforts into one program also saved a great deal of time, he added.

Kahn is based in the UCSF Philip R. Lee Institute for Health Policy Studies, the Department of Epidemiology and Biostatistics, and Global Health Sciences.

In addition to UCSF, authors on this study are affiliated with the Kenyan Ministry of Public Health and Sanitation, CHF International, the London School of Hygiene & Tropical Medicine, the ESP/UN Foundation, and the CDC.

The analysis was funded by the U.S. National Institute on Drug Abuse and by the company Vestergard Frandsen, which managed the campaign and manufactured the water filters and bed nets distributed. 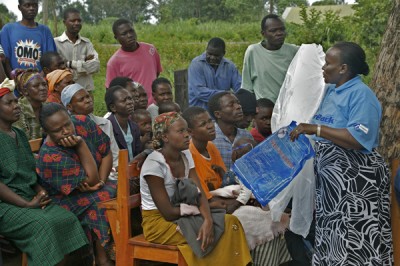 Caption: A volunteer in 2008 shows people from the Lurambi District in Western Kenya how to use incecticide-treated bednets to prevent the spread of malaria during the Integrated Prevention Demonstration Campaign sponsored by Vestergaard Frandsen.