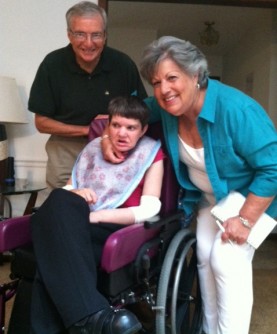 Courtesy of the Gallaher Family

Armed with knowledge from Rutgers' Community Living Education Project, John and Rose Gallaher found a new residence for their daughter, Maureen, closer to their home.

Newswise — For years, John and Rose Gallaher had considered moving their daughter, Maureen, out of the Vineland Developmental Center, where she had lived for 41 years – since she was 6. The Toms River couple wanted her closer and in a home-like setting that could afford her a more independent lifestyle. “But we were petrified,” says Rose. “Maureen had multiple handicaps – profound mental disability, autism, cerebral palsy, severe seizure disorder, among other conditions – and that made a move complicated.” When they received notice that the Department of Human Services was considering closing Vineland, their decision became urgent.

The time had come to find Maureen a new home. In addition to concerns about maintaining the quality of care Maureen received at Vineland, they also worried about how their daughter would adapt to new surroundings. They started researching community living residences, but many were unable to accommodate Maureen. “We realized we could not do this on our own,” says Rose. For assistance, they contacted the Community Living Education Project (sph.rutgers.edu/service/CLEP), a program at Rutgers’ School of Public Health that educates individuals with developmental disabilities and their families about community living. The program paired the Gallahers with family training and consultation specialist Natalie Trump, who understood their situation in a way few else could: Trump was in the process of moving her 32-year-old daughter, Marie, who has developmental disabilities, from her home into the community. “I understood their concerns,” she says. “Marie was independent and her dream was always to live in her own place. Still, it was difficult to let her go.” Trump provided the Gallahers with a list of agencies that offered community living and accompanied them on visits. When they spoke with the director of Open Door in Howell, they knew they had found the right place for Maureen. “I was sold by the founder and director’s dedication, enthusiasm and attention,” says Rose. “The staff could work with Maureen’s complicated medical conditions and there was a day program that she could attend just 10 minutes from our house.” Maureen moved in after a transition period in which she met her two housemates and had three daytime and two overnight visits. Although the state’s Task Force on the Closure of Developmental Centers ultimately decided that Vineland should remain open, the Gallahers are happy with their decision. Three years later, they have seen a marked difference in Maureen, now 50: Her anxiety has decreased, her eye contact has improved and she participates in all the activities – including yoga. And, they discovered, she loves music. “She goes out so much,” says Rose. “Now, when we want to see Maureen, we need to call to see if she’s even home.” Rutgers’ Community Living Education Program (CLEP) has been providing this service for families since the 1990s. In 2007, the program became part of the state’s Division of Developmental Disabilities (DDD) Olmstead Plan, which ensures that families have the information they need to make an educated decision about transitioning a loved one to a community setting. Since then, CLEP annually has educated about 75 families like the Gallahers on the benefits of community living.

CLEP also provides educational training sessions for DDD employees and staff at developmental centers on community living and the transition process. “Transitioning an individual from a developmental center is emotional for everyone, including the staff,” says project director David Wright. “And sometimes the family decides that community living is not right for their loved one at that time – that’s what we help people understand.” Regardless of whether a person lives in a developmental center or in a family home, the concerns are the same: maintaining a standard of care and managing fears about repeating a previous bad experience, says Wright. The Rutgers program works with families at their own pace – a process that can take years. In addition to site visits, outreach includes newsletters, one-on-one meetings and workshops. What makes CLEP effective, Trump says, is that many trainers, like her, also have adult children with disabilities. “We share our stories, and there’s an instant connection,” she says. “Community living is a mindset, and it’s important for the families to experience the lifestyle together.” Trump says that while families can be “terrified” by the transition, residents are often elated by the opportunities. “They ask questions like: ‘Can someone help me go to the bank?’ or ‘Can I work during the day and go out at night?’” she says. “It warms our heart that we are making a difference by teaching families that anyone can live in the community as long as they have the right support.”