Computer Idle? Now You Can Donate Its Time to Find a Cure for Major Diseases 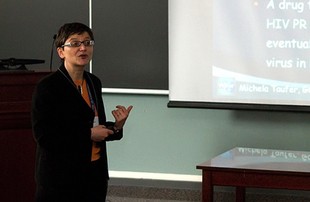 University of Delaware professor Michela Taufer is leading the "Docking@Home" project, which involves citizen volunteers and their computers in research aimed at finding a cure for major diseases.

Newswise — Not using your computer at the moment? You can now donate your computer's idle time to cutting-edge biomedical research aimed at finding a cure for HIV, Parkinson's, arthritis, and breast cancer.

Through the University of Delaware's "Docking@Home" project, led by Michela Taufer, assistant professor of computer and information sciences, and supported by the National Science Foundation, more than 6,000 volunteers worldwide are donating their computer's idle time to perform scientific calculations that will aid in creating new and improved medicines to thwart these major diseases.

Before new drugs can be produced for laboratory testing, researchers must create molecular models and simulate their interactions to reveal possible candidates for effective drugs. This simulation is called "docking," Taufer explains.

Since the combinations of molecules and their binding orientations are infinite, simulating as many combinations as possible requires tremendous computing power, Taufer notes, and supercomputers often have a long waiting line or are too expensive to use for extended periods. Thus, researchers have turned to citizen volunteers for help, which enables them to distribute the hundreds of thousands of computing tasks across a large number of computers.

The HIV-1 protease cuts the Human Immunodeficiency Virus like a scissors. If scientists could inhibit this effect, the virus could not reproduce, Taufer says.

"Basically, the protein is misbehaving, and we want to find out what small molecule can correct this behavior," she notes.

Once a binding molecule called a ligand is dropped into a protein, effectively "docking," it can switch that protein on or off, and the computer can simulate this interaction.

While right now, Taufer says, the research is in the validation stage, in time, the process is aimed at studying new drugs.

"We are transforming a process in nature into computer steps--an algorithm," she explains.

Volunteering your computer's idle time to do scientific calculations takes only a few simple steps highlighted on the project Web page (http://docking.cis.udel.edu/). You install a free, open-source software program called BOINC (Berkeley Open Infrastructure for Network Computing), developed at the University of California, and link up to the Docking Server at the University of Delaware to become part of the network. Your computer's idle cycles are accessed automatically when you are not using your system.

The BOINC software also is in use for such programs as IBM's World Community Grid, which focuses on diseases caused by the mis-folding of proteins, and SETI@Home, which is searching for signs of intelligent life outside Earth.

Currently, the 6,000 volunteers worldwide who currently are involved in UD's Docking@Home project are contributing to the completion of some 30,000 docking tasks per day, Taufer says.

Kevin Kreiser, a third-year graduate student in Taufer's group, is developing the software for ExSciTecH (an immersive volunteer computing system to Explore Science, Technology, and Health), which will allow volunteers to "throw" a molecule right into a protein using a Nintendo Wii.

"Other people do yoga with a Wii," Taufer notes, smiling. "We are doing science."