By examining a set of fossil corals that are as much as 7,000 years old, scientists have dramatically expanded the amount of information available on the El Nino-Southern Oscillation, a Pacific Ocean climate cycle that affects climate worldwide. This video describes how the fossil coral records were obtained and interpreted. 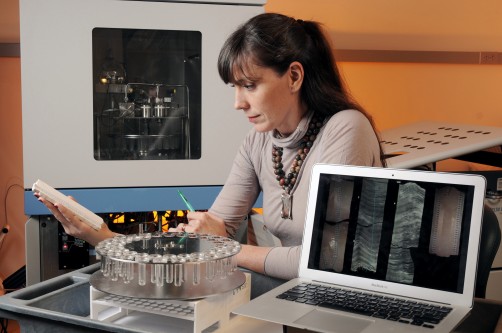 Georgia Tech associate professor Kim Cobb holds slabs of fossil coral taken from cores drilled in the Line Islands in the mid-Pacific Ocean. Powder from the slabs is examined in the mass spectrometer, which measures the ratio of oxygen isotopes to assess the strength of ENSO during the time the corals were growing. 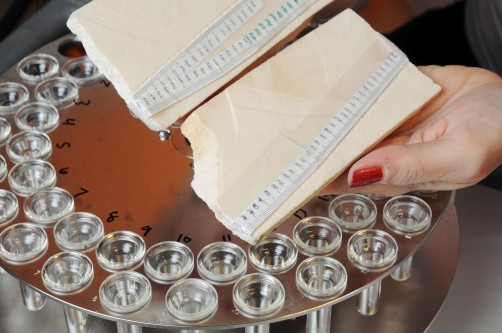 Fossil coral cores taken from the Line Islands provide information about the strength of the El Nino Southern Oscillation (ENSO) for periods of time as much as 7,000 years ago. The paper rules track the direction of coral growth. 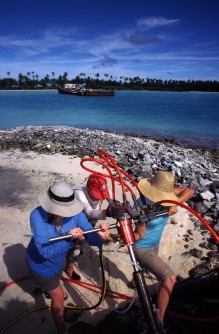 Georgia Tech researchers use a hydraulic drill to remove cores from a large fossil coral “rock” on a beach on Fanning Island in the central Pacific. In the laboratory, the cores provide information about the temperature and rainfall changes associated with El Nino activity over long periods of time. 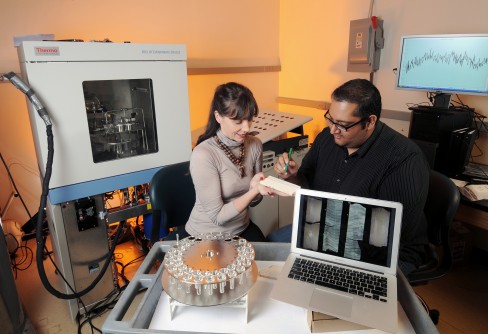 Associate professor Kim Cobb and graduate student Hussein Sayani, both from Georgia Tech, prepare samples of powder taken from fossil coral cores. The powder is examined in the mass spectrometer, which measures the ratio of oxygen isotopes to assess the strength of ENSO during the time the corals were growing. 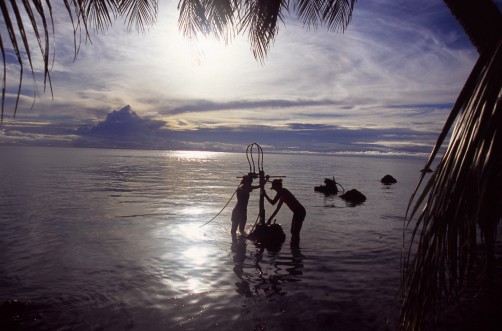 Georgia Tech researchers use a hydraulic drill to remove cores from a large fossil coral “rock” on a beach on Fanning Island in the central Pacific. In the laboratory, the cores provide information about the temperature and rainfall changes associated with past El Nino activity. 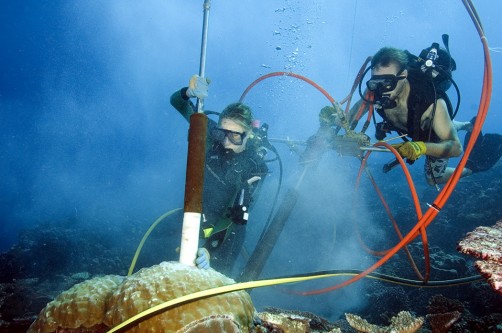 Georgia Tech researchers work underwater to remove cores from living coral colonies growing on Fanning Island in the central Pacific. In the laboratory, these “modern” cores provide records of the most recent period of climate changes for comparison to the fossil coral climate reconstructions.

Newswise — By examining a set of fossil corals that are as much as 7,000 years old, scientists have dramatically expanded the amount of information available on the El Nino-Southern Oscillation, a Pacific Ocean climate cycle that affects climate worldwide. The new information will help assess the accuracy of climate model projections for 21st century climate change in the tropical Pacific.

“We looked at the long-term variability of ENSO in the climate models and asked how it compares to the long-term variability of ENSO in the real world,” said Kim Cobb, an associate professor in the School of Earth and Atmospheric Sciences at the Georgia Institute of Technology. “We show that they actually match fairly well. This project sets the stage for conducting more detailed data-model comparisons from specific time intervals to test the accuracy of ENSO characteristics in the various models.”

The research, sponsored by the National Science Foundation (NSF), was scheduled to be reported January 4 in the journal Science. Researchers from the Scripps Institution of Oceanography and the University of Minnesota also contributed to the work.

El Nino Southern Oscillation extremes drive changes in global temperature and precipitation patterns every two to seven years. The variations are particularly pronounced in the central tropical Pacific, where Cobb and her team collected the fossil corals used in this study. By analyzing the ratio of specific oxygen isotopes in the coral skeletons, the scientists obtained information about ENSO-related temperature and rainfall variations during the periods of time in which the corals grew.

“Fossil corals are the kings of El Nino reconstruction,” said Cobb. “Corals grow in the heart of the El Nino region, and with monthly-resolved records, they provide a very high level of detail.”

The researchers collected the coral samples by drilling into massive coral “rocks” rolled onto Pacific island beaches by the action of strong storms or tsunamis. Cobb and her team studied 17 such cores of varying lengths and ages recovered from beaches on Christmas and Fanning Islands, which are part of the Line Island chain located in the mid-Pacific.

The islands are ideal places for obtaining records of past ENSO activity because they are close enough to the source region for ENSO to be affected by its temperature and precipitation variations, but not so close that the islands’ corals are bleached by large temperature increases during strong El Nino warm events.

The study of each core began with careful dating, done by analyzing the ratio of uranium to thorium. That work was performed by co-authors Larry Edwards and Hai Cheng at the University of Minnesota. Once the age of each core was determined, Cobb and her team chose a subset of the collection to be studied in detail.

They sawed each core in half, then X-rayed the cross-sections to reveal the growth direction of each coral. The researchers then drilled out small samples of coral powder every millimeter down the core and analyzed them with mass spectrometers at Georgia Tech and the Scripps Institution of Oceanography to determine the ratio of oxygen isotopes.

The isotope ratio of the coral skeleton changes with the temperature and amount of rainfall, providing detailed information about environmental conditions during each period of the coral’s growth. As many as 20 samples are analyzed for each year of the coral’s lifetime.

“We are able to count back in time, following the seasonal cycles locked in the coral skeleton, as long as the core will allow us,” Cobb explained.

In all, Cobb’s team added 650 years of monthly-resolved information about ENSO variations across nearly 7,000 years. That required analyzing approximately 15,000 samples over the course of the study, which began in 2005.

Using the new sequences to quantify the range of natural variability in ENSO strength, the researchers have detected a modest, but statistically-significant increase in 20th century ENSO strength that may be related to anthropogenic climate change. However, the coral reconstruction shows an even higher level of ENSO strength 400 years ago, though its duration was shorter.

“The level of ENSO variability we see in the 20th century is not unprecedented,” Cobb said. “But the 20th century does stand out, statistically, as being higher than the fossil coral baseline.”

Information about the El Nino-Southern Oscillation is important for climate scientists because the cycle helps drive other aspects of global climate change.

The work has already called into question a long-held belief that ENSO was reduced some 6,000 years ago. Certain climate models support that picture, but Cobb said that fossil coral data from that period doesn’t support a reduction in ENSO strength.

Looking to future research, Cobb believes the work will be useful in helping scientists assess the accuracy of climate models.

“Prior to this publication, we had a smattering of coral records from this period of interest,” she said. “We now have tripled the amount of fossil coral data available to investigate these important questions. We have been able to provide a comprehensive view of recent variations in ENSO.”

Beyond the researchers already mentioned, the paper’s co-authors include Hussein R. Sayani and Emanuele Di Lorenzo from Georgia Tech and Christopher Charles, Niko Westphal and Jordan Watson from the Scripps Institution of Oceanography. In addition to the National Science Foundation, the project received assistance from Norwegian Cruise Lines, the National Geographic WAITT program, and the Palmyra Atoll Research Consortium.

The bulk of the research reported here was supported by the National Science Foundation (NSF) under Grant OCE-0752091. The content of this article is solely the responsibility of the authors and does not necessarily represent the official views of the NSF.