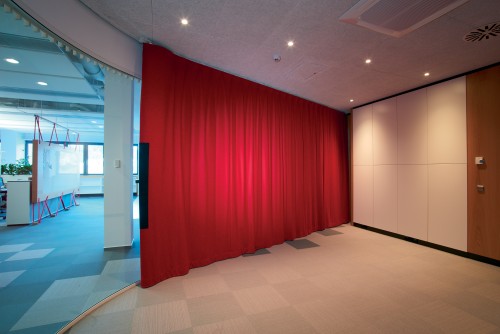 Multiple sound curtains have been used at the headquarter of the German company Häfele.

Newswise — Washington, D. C., June 26, 2017 -- Anyone who has worked in an office with an open floor plan becomes aware of a major downside of these otherwise collaborative spaces: It is impossible to hold confidential meetings with colleagues -- or even make a personal phone call to schedule a dentist appointment in your office.

One solution developed by a German textile manufacturer is a system of sound-insulating curtains to create temporary, soundproofed “variable zones” within the open office, where private conversations or meetings can occur.

The system will be described by Jonas Schira of Gerriets GmbH during Acoustics ’17 Boston, the third joint meeting of the Acoustical Society of America and the European Acoustics Association being held June 25-29, in Boston, Massachusetts.

The sound-insulating curtains are composed of multiple layers of fabrics with different acoustical impedances (the acoustical impedance is a measure of the resistance of a material to the passage of sound waves) that run along medium- to heavy-duty aluminum tracks attached to the ceiling. A standard seven-layer curtain -- when precisely installed along the aluminum track, to avoid air gaps that could lower the amount of sound insulation -- reduces the sound heard by individuals outside the zone by about 16 decibels, on average.

“The sound dampening in the middle and high frequencies is much higher though and very loud conversations get reduced to a normal background noise level, because the curtains have a high dampening in the critical higher middle frequencies,” Schira said, who has a background in both audio engineering and music.

If needed, he said, the curtains can be retrofitted with additional layers to achieve even higher dampening. The thickest system created so far consists of a 12-layer sound curtain that can achieve an average sound dampening of 26 decibels. That is equivalent to the sound dampening provided when you shut a normal door connecting two offices.

Because multiple layers of fabric are used, the curtains are opaque, with only the outer layer visible to the user. This outer layer -- which can come in almost any fabric or color, Schira explained, and even be printed, for example, with the logo of the company -- provides an additional absorption area that helps to decrease echoing inside the variable rooms, and therefore increase the intelligibility of speech.

The sizes of the variable zones can range from small 3-by-6-foot “think tanks” to large 1800-square-foot seminar rooms. A complete system weighs just over 11 ounces per square foot (3.5 kilogram/square meter).

In future designs, the company hopes to incorporate windows into the curtains, “or come up with a completely transparent solution,” Schira said.

Session 2pAAb6, "Variable room design in office spaces by the use of sound insulating curtains" by Jonas Schira, is at 3:00-3:20 p.m. EDT, Monday, June 26, 2017 in Room 206 of the John B. Hynes Veterans Memorial Convention Center.

In the coming weeks, ASA’s World Wide Press Room will be updated with additional tips on dozens of newsworthy stories and with lay-language papers, which are 300-800 word summaries of presentations written by scientists for a general audience and accompanied by photos, audio, and video. You can visit the site during the meeting at http://acoustics.org/world-wide-press-room/.

We will grant free registration to credentialed journalists and professional freelance journalists. If you are a reporter and would like to attend, contact Emilie Lorditch ([email protected]) or Julia Majors ([email protected]) at AIP Media 301-209-3090. For urgent requests, staff at [email protected] can also help with setting up interviews and obtaining images, sound clips or background information.

A press briefing featuring will be webcast live from the conference Monday, June 26, 2017 in the afternoon and Tuesday, June 27, 2017 in the morning in room 111 of the John B. Hynes Veterans Memorial Convention Center in Boston, Massachusetts.
Register at https://www1.webcastcanada.ca/webcast/registration/asa617.php to watch the live webcast. The schedule will be posted here as soon as it is available.

The European Acoustics Association (EAA) is a non-profit entity established in 1992 that includes in its membership societies predominantly in European countries interested in to promote development and progress of acoustics in its different aspects, its technologies and applications. EAA gathers 33 societies of acoustics and serves public citizens and more than 9000 individual members all over Europe with yearly events as well as scientific conferences and publications such as Acta Acustica united with Acustica and Acoustics in Practice. The European Acoustics Association (EAA) is an Affiliate Member of the International Commission for Acoustics (ICA) and of Initiative of Science in Europe (ISE): https://euracoustics.org/.