Cutting the Cost of Ethanol, Other Biofuels and Gasoline

Enzymes, genetically engineered to avoid sticking to the surfaces of biomass such as corn stalks, may lower costs in the production of cellulose-based biofuels like ethanol. 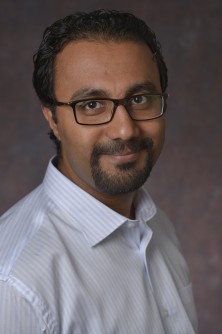 Shishir P. S. Chundawat, an assistant professor in the Department of Chemical and Biochemical Engineering at Rutgers University-New Brunswick.

Newswise — Biofuels like the ethanol in U.S. gasoline could get cheaper thanks to experts at Rutgers University-New Brunswick and Michigan State University.

They’ve demonstrated how to design and genetically engineer enzyme surfaces so they bind less to corn stalks and other cellulosic biomass, reducing enzyme costs in biofuels production, according to a study published this month on the cover of the journal ACS Sustainable Chemistry & Engineering.

“The bottom line is we can cut down the cost of converting biomass into biofuels,” said Shishir P. S. Chundawat, senior author of the study and an assistant professor in the Department of Chemical and Biochemical Engineering at Rutgers University-New Brunswick.

Typically, the enzymes tapped to help turn switchgrass, corn stover (corn stalks, leaves and other leftovers) and poplar into biofuels amount to about 20 percent of production costs, said Chundawat, whose department is in the School of Engineering. Enzymes cost about 50 cents per gallon of ethanol, so recycling or using fewer enzymes would make biofuels more inexpensive.

In the United States, gasoline typically contains up to 10 percent ethanol and corn grain is the primary feedstock of ethanol, according to the U.S. Energy Information Administration. Biorefineries produce about 15 billion gallons of ethanol a year.

In the last few years, some refineries began converting the inedible parts of corn plants into ethanol, Chundawat said.

“The challenge is breaking down cellulose (plant) material, using enzymes, into sugars that can be fermented into ethanol,” he said. “So any advances on making the enzyme processing step cheaper will make the cost of biofuel cheaper. This is a fairly intractable problem that requires you to attack it from various perspectives, so it does take time.”

Biomass contains lignin, an organic polymer that binds to and strengthens plant fibers. But lignin inactivates enzymes that bind to it, hampering efforts to reduce enzyme use and costs, according to Chundawat.

The Rutgers and Michigan State University researchers showed how specially designed enzymes (proteins) can limit their binding to and inactivation by lignin. That would ultimately lower enzyme use and make enzyme recycling feasible for biorefineries in the near future, Chundawat said.

Caption: Enzymes, genetically engineered to avoid sticking to the surfaces of biomass such as corn stalks, may lower costs in the production of cellulose-based biofuels like ethanol. 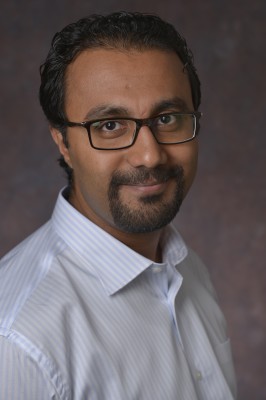 Caption: Shishir P. S. Chundawat, an assistant professor in the Department of Chemical and Biochemical Engineering at Rutgers University-New Brunswick.