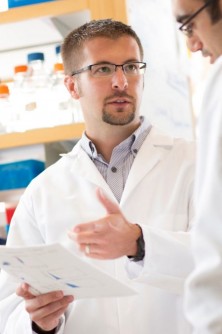 PMD is a rare childhood degenerative disorder of the central nervous system in which coordination, motor abilities and intellectual function progressively deteriorate. The prognosis for severe forms is poor, with progressive deterioration until death.

The disease primarily affects boys through genetic mutations in the PLP1 gene that prevent the brain from properly making myelin, the protective insulation around nerve cells. There are currently no treatment options for these children.

The therapeutic approach was discovered by a team of medical researchers, led by principal investigator Paul Tesar, the Dr. Donald and Ruth Weber Goodman Professor of Innovative Therapeutics in the Department of Genetics and Genome Sciences at the Case Western Reserve School of Medicine.

As detailed in the journal Nature in 2020, Tesar and his research team validated the treatment target—a toxic protein resulting from the genetic mutation. In collaboration with Ionis, they successfully used a family of drugs known as antisense oligonucleotides to target the RNA strands that created the abnormal protein to stop its production in brain cells. This treatment with Ionis-developed antisense oligonucleotides reduced PMD’s hallmark symptoms and extended lifespan in mouse models of PMD, establishing the clinical potential of this approach.

“There is nothing more gratifying in science than for research to advance from the laboratory into patients,” Tesar said. “This agreement with Ionis is a major step toward a transformational antisense medicine for PMD patients and their families.”

Based in Carlsbad, California, Ionis specializes in RNA-targeted therapeutics. The agreement with Case Western Reserve covers the use of  antisense oligonucleotides drugs to suppress levels of PLP1 RNA to treat PMD.

“There is an urgent need to develop and deliver effective treatments for devastating neurological disorders like Pelizaeus-Merzbacher disease,” said C. Frank Bennett, Ph.D., Ionis' executive vice president, chief scientific officer and franchise leader for neurological programs. “We applaud the preclinical research done by Dr. Tesar and his colleagues and are excited to take the next steps toward potentially developing a novel medicine to treat PMD patients.”

“It has been extremely gratifying to work with Dr. Tesar, who has been incredibly dedicated to finding a treatment for such a debilitating disease,” said Michael Haag, executive director of technology management in the university’s Technology Transfer Office. “The partnership with Ionis is critical in the continued development of this therapy and our ultimate goal of making it available to patients.”