Dr. Maximiliano D'Angelo explains how the award from the American Cancer Society will help his lab seek new treatments for leukemia.

SBP's Max D'Angelo talks about how this scholar grant will move his lab work forward, towards new treatments for Leukemia. 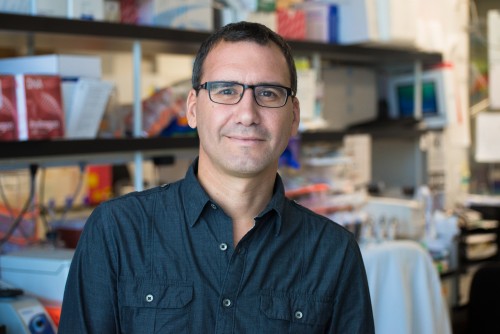 The American Cancer Society awards Research Scholar Grants for promising research projects that may lead to the elimination of cancer as a major health problem. Recipients must be in the first six years of an independent research career or faculty appointment.

“Max is a well-deserving recipient of this prestigious award, says Kristiina Vuori, M.D., Ph.D., president of SBP. “He is an outstanding scientist making significant discoveries that may help shape the future of cancer therapies. ”

D’Angelo, who has been at SBP since 2014, will use the grant to study how alterations in nuclear pore complexes (NPCs) contribute to the malignant transformation of blood cells and cancer.

NPCs play an important role in exchanging molecules between the cell nucleus and cytoplasm, as well as in the organization and regulation of cell processes. Alterations in certain proteins that comprise NPCs have been detected in cancer, especially in several types of leukemia. D’Angelo and his lab will focus on a particular nuclear pore complex component that is a critical regulator of cell differentiation.

“I’m very grateful to the American Cancer Society for supporting this research,” says D’Angelo. “There is a tremendous need to understand the pathways leading from NPC defects to cancer—insights that may lead to better treatments and potentially cures.”

Caption: Dr. Maximiliano D'Angelo explains how the award from the American Cancer Society will help his lab seek new treatments for leukemia.

Caption: SBP's Max D'Angelo talks about how this scholar grant will move his lab work forward, towards new treatments for Leukemia.