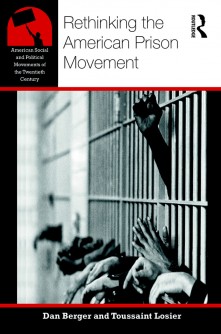 “Rethinking the American Prison Movement,” by Dan Berger and Toussaint Losier, was published in December.

Newswise — Dan Berger is an associate professor in the University of Washington Bothell School of Interdisciplinary Arts and Sciences and the author of many books and articles, including the 2014 book, "Captive Nation: Black Prison Organizing in the Civil Rights Era."

Berger answered some questions about the book and the prison reform movement.

What's the concept of the book and how did it come to be written?

D.B.: "Rethinking the American Prison Movement" aims to provide an accessible account of the many ways in which incarcerated people have fought for social justice throughout the 20th century and into the present.

Prisoners have not only fought to improve their own circumstances; they have pushed a broader rethinking of such principles as democracy, justice and freedom. Drawing on the explosion of scholarly literature on prisons in recent years, we describe how, at different moments, prisoners came to think of themselves as political actors and to be received as such. We also analyze the strikes, protests, books and lawsuits that have defined the parameters of prisoner rights.

The book is part of a series of textbooks published by Routledge on social and political movements in American history. Each book in the series provides narrative accounts of how different activist campaigns — from welfare rights to feminism, gay and lesbian liberation to labor — have contributed to making the modern United States.

The U.S., you write, is the only industrialized nation that uses the death penalty and life-without-parole sentences that "function as a crypto-death penalty," prosecutes juveniles as adults and holds scores of thousands of individuals in solitary confinement. Has this historically been true? How did things get this way?

D.B.: Throughout its history, the U.S. prison system has been more severe than those of other Western countries, particularly in its use of harsh and degrading punishments.

Since the 1960s, the country has also seen a dramatic expansion of the scale and scope of punishment that has given the U.S. the world’s largest prison population. The reasons are complex, but they principally involve the convergence of racism, criminalization and globalization. A set of reactionary politicians used “law and order” as a bludgeon against the Black freedom struggle and other social movements. In response, liberal and conservative politicians tried to one-up each other proving who could be more “tough on crime.”

Meanwhile, broader changes to the global economy meant that many of the very same communities demanding social transformation — working class communities of color — were pushed to the margins of society and increasingly into prison.

The death penalty has a long, ignoble history in this country, one that is inseparable from its racist application against Black men in particular. In the book, we describe the rise of the prison movement in the early 20th century as part of Black activism to stop lynching. Even once lynching declined as a mode of “popular justice,” the country has continued to rely on executions while other industrialized nations abolished the practice.

The Supreme Court banned the death penalty in the early 1970s, only to reinstate it later in the decade as incarceration rates began to rise. Since then, the “tough on crime” approach has yielded a more punitive environment across the board that has sent people to prison for longer periods of time, often at younger ages, with little in the way of rehabilitation programs. Until the 2011 Miller v. Alabama case constrained the practice, many states even sentenced juveniles to life without parole, including for petty offenses.

Even while the death penalty has declined in popularity, “death by incarceration” remains morbidly common as a result of the expanded use of life-without-parole sentences in overcrowded prisons with poor health care systems.

You write that critics often dismiss the prison abolition movement as a fantasy of eliminating all prisons entirely, "as if there was a central switch to flip that would empty all the prisons." What is a more accurate description of the movement and its goals?

D.B.: Abolitionism is one of several currents running through the prison movement. In the 1970s, several journalists, judges, politicians, faith communities and others joined radical activists in and out of prison in calling for the abolition of prisons. That demand was largely buried in the ensuing expansion of the prison system. Yet it never disappeared. It has resurfaced with increasing clarity in the last two decades of scholarship on and organizing against mass incarceration.

Abolition is a far-reaching demand. Abolitionists argue that prisons themselves constitute violence: they destroy lives and livelihoods, and offer neither accountability nor deterrence. Seen from that perspective, prisons cannot be reformed.

Rather, society needs to pursue alternative forms of justice. Abolitionists work to reduce the reliance on all aspects of the criminal justice system. They pursue a set of alternative measures to do so, including decriminalization of drugs and sex work, restorative or transformative justice for those that have caused harm, and the redirection of funds from policing and punishment to universal health care, quality public schools, and other necessary programs.

Prison abolitionists self-consciously draw upon the 19th century movement to abolish slavery, a movement that seemed small and incapable of winning up until it succeeded. While only one tendency within a larger movement, abolition exists as a beacon for larger social transformation. Abolition is an analysis that prisons do not make society safer and are themselves aggregators of violence. And so abolition is as much a positive demand for full employment, universal health care and the resources that keep people happy, healthy, and safe as it is a negative demand against prisons.

You write that those in the movement support the decriminalization of drugs and sex work as well as "restorative modes of conflict resolution even for serious offences such as rape and murder" and redirection of funds from policing to health care, schools and other needs. Where does the American public stand on such points, and what needs to change? D.B.: Public opinions on these issues varies. And of course as we see on issues from health care to taxes and much else, there are wide gaps between what most Americans want and the policies politicians pursue. On some of these questions — drug decriminalization, say — public opinion is far more advanced than are our policies. At the federal level, the Trump administration (especially through Attorney General Jeff Sessions) wants to double down on the racist, unpopular, and demonstrably failed policies of the wars on crime and drugs that have given the U.S. such a large prison population to begin with.

Still, I think there are some reasons for optimism. Most incarcerated people are imprisoned in state prisons or local jails, and so we have to look at the local level. The city of Philadelphia just elected the most progressive district attorney the country has ever known, and a number of other reform-minded DAs also have sought office or won election in recent years. Marijuana decriminalization is growing, as are conversations for safe-injection sites for other drug consumption. Campaigns to close or halt construction on jails and prisons can be found from New York to Kentucky to here in Washington. Support for the death penalty is low, and at the Golden Globes, Laura Dern called for "restorative justice," a hallmark of non-punitive modes of conflict resolution.

There is still a lot of work to be done. While “mass incarceration” remains unpopular, the country still imprisons more people than anywhere else on the planet. Many of the remedies to this crisis pursued thus far barely scratch the surface. Think of it this way: The country now locks up more people than anywhere else on the planet. If the U.S. were to reduce its prison population by half — the demand of a bipartisan initiative launched by Van Jones and Newt Gingrich — the U.S. would still have the world’s second largest prison system.

We have to have bigger and bolder conversations about how we move away from mass incarceration. The book tries to contribute to that by putting the spotlight on what incarcerated people and their loved ones have said and done over the last century.

Could you tell a bit more about "restorative justice" for serious crimes? How would such a scenario play out in the judicial system?

D.B.: Restorative and transformative forms of justice have been around for a long time. Many indigenous societies have been practicing non-punitive modes of conflict resolution and community accountability for generations. Restorative justice is a different model than criminal justice — it pursues individual accountability in a collective and non-punitive context. So it takes place outside the judicial system.

Unlike criminal justice, in which the state determines the process, restorative justice is centered on supporting those who have been harmed by violence while recognizing that the person or people who perpetuated violence is still a human being. In New York, for instance, the organization Common Justice does restorative justice circles, which are facilitated conversations between those who have caused harm, those they have harmed or their surrogates, and people supporting both parties. With the help of a trained facilitator, participants in the circle “reach agreements about what the responsible party can do to make things as right as possible.”

The National Council for Incarcerated and Formerly Incarcerated Women, you write, formed in 2015 with the motto "Nothing about us without us." Could you tell about meaning and importance of the saying?

D.B.: It has been heartening to see calls for prison reform gain more traction since 2010. Yet all too often the people most directly impacted by the decisions have been excluded from making or changing policy. The National Council’s slogan is the clearest invocation of the need for currently and incarcerated people and their loved ones to be part of crafting a solution to America’s prison problem.