Mensch on a Bench rakes in over $3M in five years 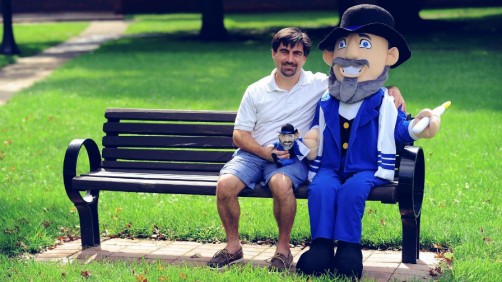 This Hanukkah, Neal Hoffman (MBA '05) is celebrating five years of his hit toy line, Mensch on a Bench.

Moshe the Mensch has had five very busy years.

Newswise — The plush toy — created by University of Virginia Darden School of Business graduate Neal Hoffman (MBA ’05) in 2012 and featured on UVA Today last year — is the centerpiece of the line of Mensch on a Bench toys that Hoffman designed after his Jewish children asked for an Elf on the Shelf Christmas-themed toy.

Hoffman joked that “Jews don’t do elves on shelves, we do mensches on benches,” invoking a Yiddish word meaning “a good and honorable person.”

It proved to be a prescient statement.

Moshe — the toy Hoffman designed the same night as that conversation with his sons — is now in the hands of more than 100,000 Jewish children as they celebrate Hanukkah this week, along with other toys in the Mensch on a Bench line like the newly launched Dreidel Dog.

Each is designed to teach the next generation about the history behind Hanukkah and other Jewish traditions, and to encourage children to do the right thing and be a mensch, which Hoffman called the highest compliment available in Judaism.

In the five years since its launch, the Mensch on a Bench line has done more than $3 million in sales. Hoffman, who runs the business out of his house in Ohio, has earned backing from Lori Greiner and Robert Herjavec, venture capitalists on ABC’s “Shark Tank” reality show competition for budding entrepreneurs. In fact, Mensch on a Bench is the most publicized brand to ever come out of “Shark Tank,” banking more than 2 billion media hits.

In one of those hits, Hoffman — and a life-sized Moshe — recently joined economic pundit Scott Varney on the Fox Business Network show “Varney & Co.” to talk about the toys’ success this holiday season, as shown in the video below.

For Hoffman, the past five years have brought the fulfillment of a lifelong dream of making toys. As a first-year student at Darden, he called Hasbro and said that he wanted to work for them, even without pay. He ended up working there for several years after graduating from Darden in 2005.

When we spoke to Hoffman recently, he had just returned from an assembly at his sons’ school, where he did a dreidel demonstration for his younger son’s kindergarten class and spoke to his older son’s fourth-grade class.

“I talked about chasing your dreams and finding your own way in life, and told them how I had always wanted to make toys,” Hoffman said. “It was such a great day.”

Another dream came true recently when the Boston Red Sox asked Hoffman to partner with their team for a Jewish Heritage Night at Fenway Park in June, complete with giveaways and a special appearance by a Moshe the Mensch mascot. Hoffman, who grew up in Boston as a huge Red Sox fan, could hardly contain his excitement.

“I said ‘yes’ before I even really knew the question,” he joked.

In addition to the Red Sox partnership, Hoffman has run giveaways with businesses like Israeli airline carrier El Al and created events like the first-ever “Mensch Day,” held on Nov. 18 this year. Hoffman took his sons to the Ronald McDonald House in Cincinnati to donate toys and holiday decorations, and he encouraged others to use social media to share how they were helping their communities.

“Eighteen is a lucky number in Judaism,” Hoffman explained. “The day was just another way for us to encourage kids to be mensches and do good deeds.”

That mission, more than anything, is what Hoffman hopes families take away from the Mensch on a Bench line.

“We just really want to keep trying to teach good values, and encourage people to be mensches all year long, not just during the holidays,” he said.