Professor of Chemistry and Biochemistry Oliver Steinbock will send materials for experiments to the International Space Station in June aboard a Falcon 9 rocket from SpaceX. The goal of the project is to grow a chemical garden — inorganic structures that can spring up from metal salts and a silicate solution.

Steinbock was initially contacted about the potential project by Richard Grugel, a materials scientist at NASA’s Marshall Space Flight Center in Huntsville, Alabama. Grugel was looking at a series of experiments involving cement and suggested they could work together on a chemical garden project.

“I’m very excited,” Steinbock said. “You probably only do this — work with the International Space Station —just once in a lifetime.”

Chemical gardens are basically colorful small structures — about a half inch high — of metal salts such as iron chloride or copper oxide. It’s a traditional chemistry class experiment that has been performed for years, but scientists still find great value in it as they try to grow new materials and understand more about Earth’s history.

Chemical gardens are inorganic, but they may mimic life-forming processes that occurred at the site of hydrothermal vents found on the sea floor. Some of the structures appear virtually identical to microfossils that scientists have found.

“We are interested in the system because these materials may have something to do with the origins of life,” Steinbock said.

Steinbock will send more than 35 vacuum-sealed sample bags aboard the SpaceX rocket to the space station. Once there, an astronaut will perform the experiment by removing a spacer that separates silicate solution from the metal salts. The astronaut will then video and photograph the results for Steinbock.

Typically, chemical gardens can grow in mere minutes, Steinbock said. But, researchers have no idea how they will grow in space. For example, typically, these structures grow upward, but that would likely change under conditions of microgravity.

One of Steinbock’s doctoral students, Alex Blanchard, will perform a control experiment in Steinbock’s lab with the same metal salts, so that scientists can compare the results.

Though the larger goal is to potentially obtain some greater understanding of how the Earth operated in its early days, there may also be a more immediate practical application to this experiment, Steinbock said.  These miniature structures could be used as tubes or containers for materials in space.

“If you can control the formation, you could grow microtubes without expensive engineering,” he said.

The Falcon 9 rocket is set to launch at 5 a.m. on June 28.  The samples will be returned to Earth at a date to be determined after the experiments have been completed. 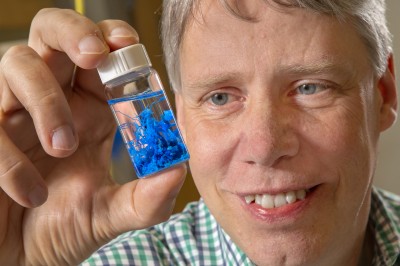 Caption: Oliver Steinbock is a professor of chemistry and biochemistry at Florida State University. 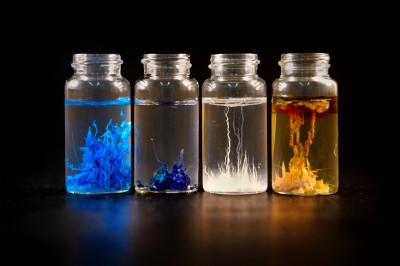