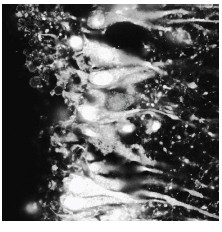 Image of a rat brain slice loaded with the Arg-Cy3-TIVA tag. Loading of the cells is apparent from the white fluorescence.

Newswise — PHILADELPHIA - A multi-disciplinary team from the University of Pennsylvania have published in Nature Methods a first-of-its-kind way to isolate RNA from live cells in their natural tissue microenvironment without damaging nearby cells. This allows the researchers to analyze how cell-to-cell chemical connections influence individual cell function and overall protein production.

Tissues, of course, are complex structures composed of various cell types. The identity and function of individual cells within each tissue type – heart, skin, brain, for example -- are closely linked by which genes are transcribed into RNA, and ultimately proteins. To study gene expression in single cells in their natural tissue setting, researchers must be able to look at a cell’s inner workings, much as an ecologist does when studying how an individual species interacts with its habitat.

Even cells of seemingly the same type are not identical at the molecular level. Most knowledge about variability in gene expression has been from studies using heterogeneous groups of cells grown in culture. Researchers doubt the ability to extrapolate “real biology” from these unnatural conditions. Tools for investigating what type and how much RNA is present in single cells in intact tissue provide a unique opportunity to assess how mammalian cells really work and how that function may go awry in various diseases, and eventually in testing new drugs.

“Our data showed that the tissue microenvironment shapes the RNA landscape of individual cells,” says Eberwine. The new technique is called TIVA, short for transcriptome in vivo analysis.

The team used this non-invasive method to physically isolate the RNA of a single cell within living tissue in mouse and human cells, and in particular human tissue obtained from brain surgeries within minutes after the neurosurgery was completed.

Clever DesignThe TIVA tag is a Swiss-Army-Knife-type of molecule, cleverly designed to contain the multiple chemical tools it needs to accomplish its task of capturing mRNA from a cell without getting any from its neighbors.

The first tool is a sequence of amino acids that allows the molecules to infiltrate the walls of a cell without damaging it or the surrounding tissue. But rather than targeting a specific cell at this stage, the researchers washed the entire tissue sample from the brain with a solution containing TIVA tags, introducing the molecule to all of the cells.

Because this technique means the molecule is present throughout nerve cells in the brain tissue rather than only in a single cell of interest, the researchers need a way to keep the TIVA tag’s mRNA-capturing ability switched off until the time is right. This is accomplished by the tag’s second tool, a removable “cage” that covers the molecule’s binding site.

The TIVA tag builds on prior work from the Eberwine lab using photoactivation of DNAs and a capture sequence to isolate RNA-binding proteins from live cells, as well as work from the Dmochowski lab, which has been working on various iterations of light-activated oligonucleotides for over a decade. “These molecules are ‘caged’ in the sense that we’re physically blocking their function until we give them the key, which is laser light,” Dmochowski says. “Once the cage is off, they’re free to do what they want to do: bind to mRNA.”

Their binding ability comes from the molecule’s long-repeating chain of uracil, one of RNA’s four bases. This “poly-U” sequence is meant to bind with a corresponding “poly-A” sequence, a repeating chain of adenine bases found on all mRNA molecules. To temporarily block this ability, the researchers gave the TIVA tag a cage made of a pair of poly-A sequences. “In this way, it’s very happy and stable binding to itself,” Dmochowski says. “But these poly-A sequences are attached to the molecule by two linkers that can be broken by a laser. By coming in with blue light, which has enough energy to break those bonds, the molecule falls apart in such a way that the poly-U sequence is revealed and can start binding to mRNA.”

The precision of the blue-activating laser is such that the researchers are able to break open the cages of TIVA tags in a single cell. However, to ensure that these tags have made it into the target cell, they first probe it with a less powerful green laser. This laser interacts with another of the tag’s tools: a pair of fluorescent dyes.

These dyes are positioned in a precise way: one is near the poly-U sequence and the other by the poly-A. When the molecule’s cage is still locked, they are close enough together that they can transfer energy from the laser between one another. According to Pharmacology’s Sul, probing a cell with a green laser and producing a light emission that corresponds to this energy transfer between the dyes is a signal that the tag has made it into the cell intact.

After activating the tags with the more powerful blue laser, the researchers can then probe the cell with the green laser again; the absence of the signal means the dyes are separated and the cage has been removed.

The cell’s last tool is a biotin marker, attached at the end of molecule that has the poly-U sequence. After the researchers activate the tags, they break open the target cell to release them with the captured mRNA in tow. The researchers use a bead laced with a bacterial protein that has a high affinity for biotin.

Cell Profilers The tag chemically interacts with mRNA within the cell via hydrogen bonds and can be used as a handle to isolate the entire mRNA complement of that cell. As tag activation is achieved with light, any cell within the living tissue can be targeted. This bead collects the tags, at which point the attached mRNA can be purified, amplified and sequenced.

The team then profiled gene expression in single neurons and compared it to other cells in different growing conditions. For example, in comparing the abundance of mRNA in cells in intact brain tissue versus those in a mixture of nerve cells in culture, Biology’s Kim and the team were surprised to find that cells in suspension expressed more genes when compared to cells in intact tissue, as if the isolated cells were making more RNA to be ready for anything in the absence of getting any meaningful chemical signals from surrounding cells.

Working with Neurosurgery’s Grady, the team was able to use the TIVA approach to isolate and characterize the RNA complement of single human cortical neurons from live-slice preparations where neuron connections remain intact. The TIVA approach promises to highlight important aspects of human neurobiology and disease without first isolating human neurons, which is how such experiments have been done up to now. The team is currently developing additional TIVA tags with distinct functional groups so that multiple tags can be put into the same cell or multiple cells and the dynamics of how different molecules function in single cells can be quantified and compared in their natural tissue.

Additional authors of the study are Ditte Lovatt, Pharmacology and Brittani Ruble, Chemistry, both from Penn.

Funding was provided by the PhRMA foundation, the National Institutes of Health (R01 GM083030, U01MH098953, DP004117), and a McKnight Foundation Technology Innovations Award. This project is also funded, in part, by the Penn Genome Frontiers Institute under a grant with the Pennsylvania Department of Health, which disclaims responsibility for any analyses, interpretations or conclusions.